As a Canadian, early October always brings with it the excitement of Thanksgiving. The turkey is ordered, shopping lists checked, the pie dough is made, and there are pumpkins and gourds collecting on the sideboard.

Thanksgiving is when friends and family gather, share a feast, and express gratitude for all that they have. It’s pretty much my favourite holiday. American Thanksgiving follows ours six weeks later, and although the two celebrations are similar, each country has traditions unique to them.

While the native people of North America held celebrations for the annual harvest prior to the arrival of explorers, the first formal giving of thanks by Europeans on the continent is considered to have taken place in May 1578. Martin Frobisher, an Englishman looking for a northern route to the Pacific Ocean, held a ceremony to show his gratitude for his safe arrival in Newfoundland, Canada, after a harrowing journey through the ice packs and wicked storms of the North Atlantic. 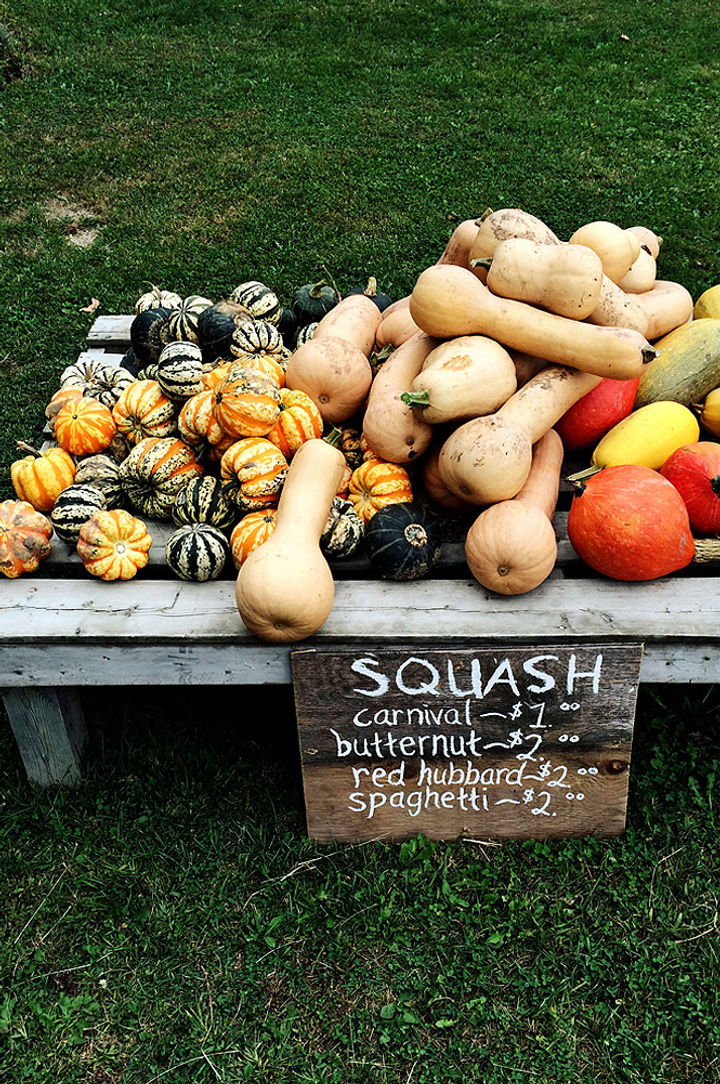 In the years since, Canadians have commemorated days of thanksgiving throughout the calendar year: settlers fêted the fall harvest, and from the end of the Seven Year’s War in 1763 there were days of Thanksgiving officially proclaimed upon historic events. In 1879 Parliament decreed Thanksgiving an annual national holiday; for a time Canadian Thanksgiving was celebrated in November to coincide with Armistice Day, but in 1931 it moved to early October. In 1957 it was finally set for the second Monday in October. Today, Thanksgiving is a statutory holiday in all but Atlantic Canada where it is optional, and makes up a three-day weekend.

The origin of Thanksgiving in the United States is not without dispute, but it is most frequently attributed to a 1621 harvest feast held by Pilgrim settlers at Plymouth Rock in Massachusetts. As in Canada, Thanksgivings were declared by both church and state. George Washington, as President, established the first nationwide Thanksgiving in November 1789, and then in 1863 Abraham Lincoln made a presidential proclamation that it be the last Thursday in November. President Franklin D. Roosevelt moved it to the fourth Thursday of November in 1941. And so, American Thanksgiving became a four-day holiday.

US Thanksgiving is the unofficial start to the winter holiday season, but Canadian Thanksgiving, held so much earlier, stands a bit more on its own.

Both Canadian and American Thanksgivings draw from European celebrations of bounty, but American ties to the Pilgrims at Plymouth is a clear distinction. In the United States, there are Thanksgiving pageants at schools, incorporating stories of pilgrims and the country’s forefathers. Canadian Thanksgiving symbols, however, are only derived from the harvest and the season. In Canada tables are decorated with gourds, sheaves of wheat, and colourful bundles of Flint corn, autumn leaves and the like. In the days leading up to the holiday people will go to fall fairs, visit corn mazes, and pick apples for the pies to come. I remember making a construction paper cornucopia in class as a child, and stuffing it with cut-out fruits and vegetables I’d drawn. Nowadays I replace the cornucopia with the spoils of a trip to the farmer’s market and fill big bowls with pomegranates, grapes, small artichokes, and figs, and my children contribute by picking out tiny pumpkins from the farm stand and collecting acorns from our backyard. (All those pumpkins are later used up for Halloween.)

The traditional roast turkey and gravy was brought to the Canadian Thanksgiving table by United Empire Loyalists during the American Revolution. But, as the day is about a general feeling of festivity and hospitality, many families across the continent supplement the Thanksgiving meal with celebratory dishes from their specific cultural backgrounds, which was the case for my experience. 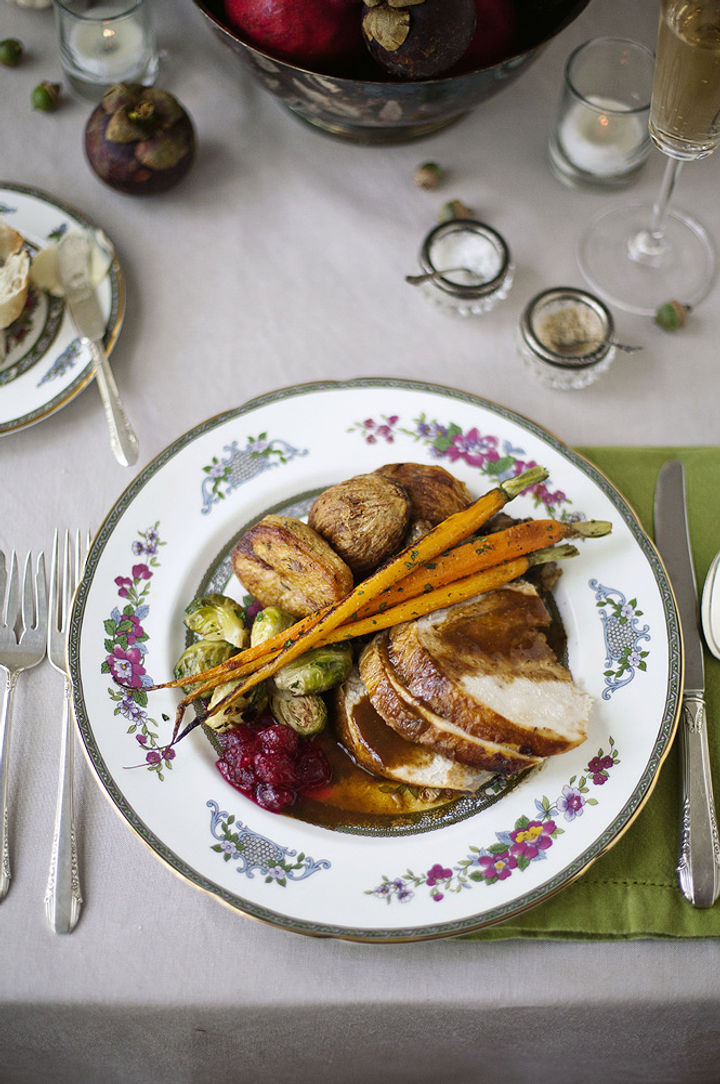 Growing up in Canada with Indian parents, we would often have mutton pilau on the table with our turkey, and gulab jamun and barfi as part of the dessert selection. Mum always made her potato stuffing. I’ve never seen it in another Canadian household—potatoes, onions, and the giblets from the bird, and generous amounts of black pepper. It was only when I took an interest in cooking that I learned about bread stuffing.

American bread stuffing is made with all types of bread, from sourdough to soft loaves to cornbread, with plenty of regional variations. In New England, oyster and pork stuffing is a classic, while in the South spiced sausage is often used. In Canada, white sandwich bread and boules are commonly used, and meat seems to be less prevalent in our stuffing; a scant amount of sausage, lardons or some bacon fat might be incorporated into the mix, but it is primarily bread and aromatics, dried fruit and nuts, with herbs such as summer savory (a sage-like herb popular in Canada and the US), sage, thyme, and parsley. 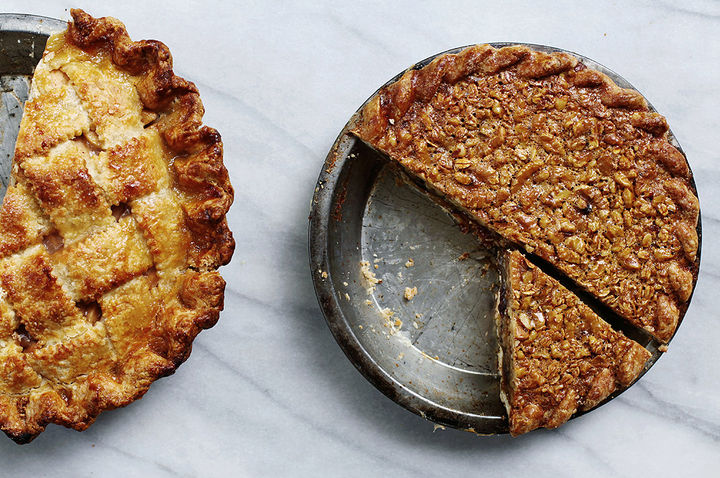 Green bean casserole (with a cream soup base and topped with fried onions) and candied yams (spiced and baked with marshmallows) are famed American side dishes without equivalent in Canada. When I was young, we always had boiled Brussels sprouts (with crosses cut in their bases), glazed carrots and parsnips, and roast potatoes. My husband’s family, who have been in Canada for generations, had two types of mashed potato (white and sweet), and green beans with almonds. Now we usually have a big salad of dark and bitter greens, roasted vegetables—root veg, squash and Brussels sprouts—and roasted and mashed potatoes.

In both the United States and Canada wild rice, a nutty rice-like grass native to North America, is most commonly featured in pilafs, but thanks to the rise in gluten-free cooking, may take the place of bread in stuffing. Everyone has cranberry sauce.

While pies in general are the definitive desserts for both Thanksgivings, American pecan pie is not as common here in the North. In Canada we have a tradition of butter tarts; small pastries with an exceptionally rich, buttery filling similar to that of a pecan, but nuts are not a given. The base is oftentimes made with a mix of sugar and corn syrup, but also with maple. Butter tarts can be plain, or made with raisins, walnuts, or even shredded coconut.

My husband’s grandmother’s are the gold standard as far as I’m concerned. For my recent cookbook, I adapted her recipe into a full-sized pie as I prefer the ratio of filling to crust, and studded the filling with walnuts, oats, and dried cherries. Alongside the requisite pumpkin and apple pies, that’s our sweets sorted. 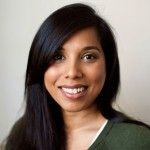 Tara O'Brady is the author of the cookbook and website, Seven Spoons. She lives in southern Ontario, Canada with her husband and two sons. She is drawn to straightforward home cooking that reflects the way many of us are cooking today—seasonally, with an international outlook and an emphasis on whole grains and good ingredients treated well. Tara writes for the Globe and Mail, Canada's national newspaper, and has been a past contributor to Kinfolk and Uppercase magazines. Her work has been featured in The Guardian, on Oprah.com, Bon Appetit, Saveur, and The Splendid Table among others. Tara can also be found on Pinterest, Instagram, Facebook and Twitter.