The majority of the world’s food crops come from a relatively small number of plant families. The brassicas – cabbages and kin – are an obvious one; the legumes – peas and beans – are another.

But also of global importance are the cucurbits – gourds – the family that includes squash, cucumbers, melons, and many others besides. They only grow in summer here, since none are cold hardy – a little-known fact is that all squash are native to the Americas. By late September the parent plants, which only a month earlier were romping across the soil in a sea of green leaves, become faded, mildewed carcasses and fruit production ground to a halt.

‘Summer squash’ are so-called because that’s their season of availability. They have soft, edible skins and only short-to-medium storage potential. Despite massively varying appearances, courgette, patty pan and crookneck cultivars are all just varieties of marrow and a single species, Cucurbita pepo.

‘Winter squash’, mostly C. maxima and moschata, have much tougher hides and far longer shelf lives, sometimes well into spring. Pumpkins (C. pepo and maxima) are creatures of the autumn, falling somewhere between the two.

As all my summer squash have now gone, this post concerns the others; colourful monsters that they are. Over the years, I have grown many different varieties of winter squash, and very much prefer some to others – for reasons culinary, horticultural and aesthetic – and here’s my rogues’ gallery of them. 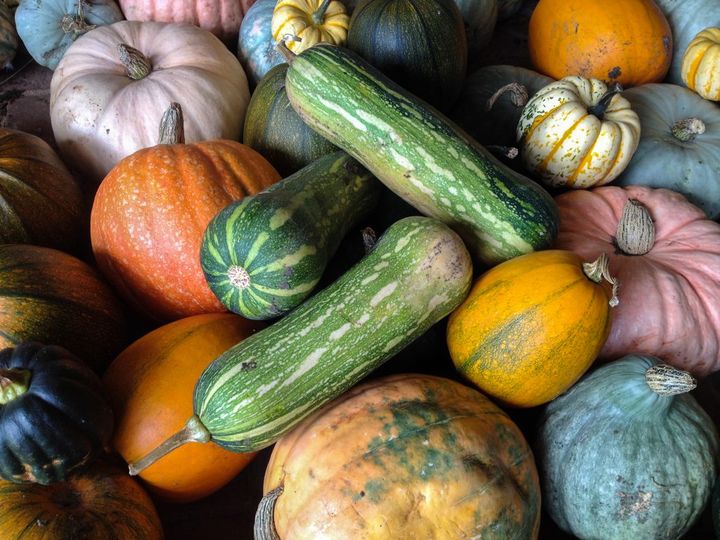 Butternut was the first squash to appear in British shops, and has many plus points: it keeps well and has firm flesh with a smooth, easily-peeled skin and a seed cavity that is small and conveniently at one end. All that said, as a gardener I have always found their germination to be rather erratic, with seedlings prone to rotting off and mature plants lacking in vigour. Butternuts are easily bought, so I only bother growing one cultivar, the unusual and beautifully striped ‘Barbara’ F1. 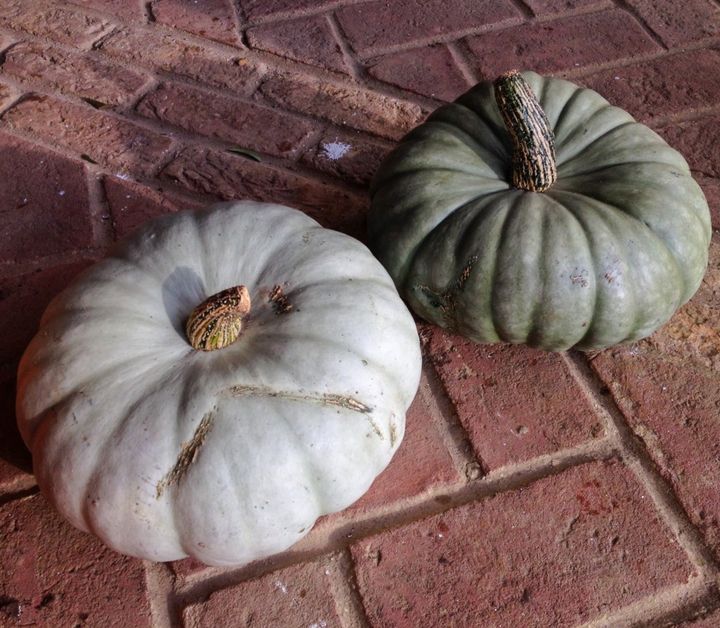 My favourite cultivar by far is ‘Crown Prince’. Like the butternut, it has dense, sweet orange flesh, but the plant crops earlier is and far more reliable. The handsome blue-grey fruits usually weigh 3-4kg and are the best keepers of all, commonly lasting until April. To its right in the photograph is ‘Queensland Blue’, attractively ribbed and with similar culinary qualities, though fruits are slower to mature. 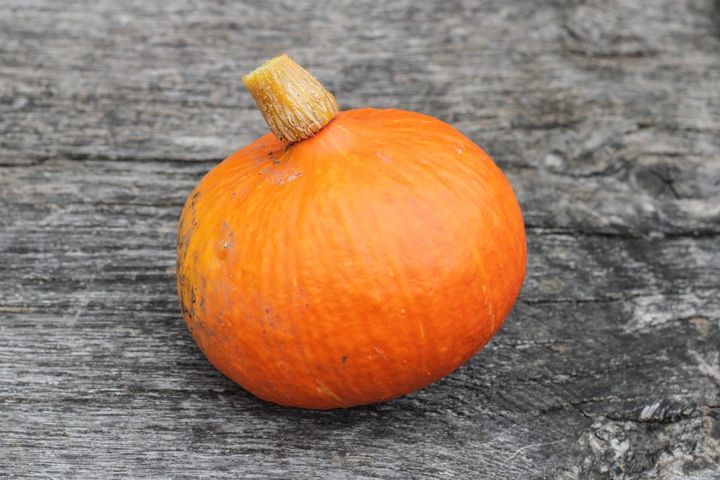 ‘Uchiki Kuri’ is another early-cropping variety, of the type known as onion squash. It wins points for the sweet nuttiness of its flesh, and for being a really practical size – one fruit being just about right for a family meal. The peeled and seeded weight is usually around 1kg, and it’ll store until January. I fancy they look like cartoon anarchists’ bombs, complete with fuses. 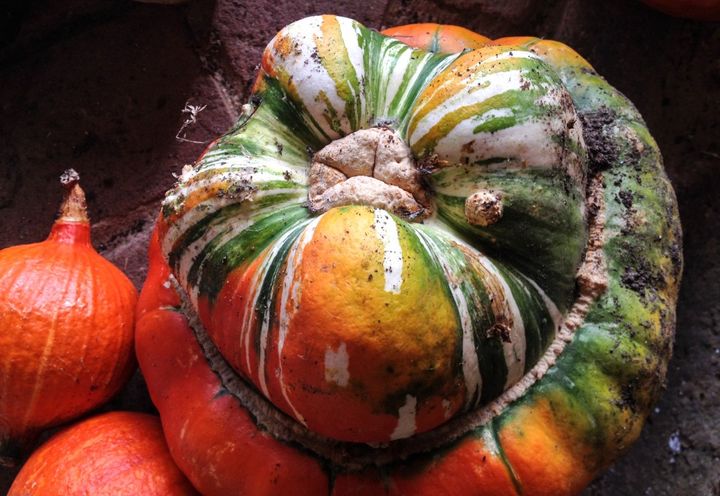 Another reason to grow squash is that you can festoon your house with them through the winter months. This, the ‘Turk’s Turban’ is famously decorative. It bears a passing resemblance to a turban but I reckon is actually more reminiscent of a mandrill’s backside. Despite appearances, it is tasty, but the trick is not even to attempt to peel it, since the skin is very tough. Just slice it (it’s not often I recommend using a machete in the kitchen) and roast it as is.

Also worth a mention is ‘Marina di Chioggia’, a heritage cultivar from the Veneto that stores superbly. Similar conviction is required to get into this big green warty beast. 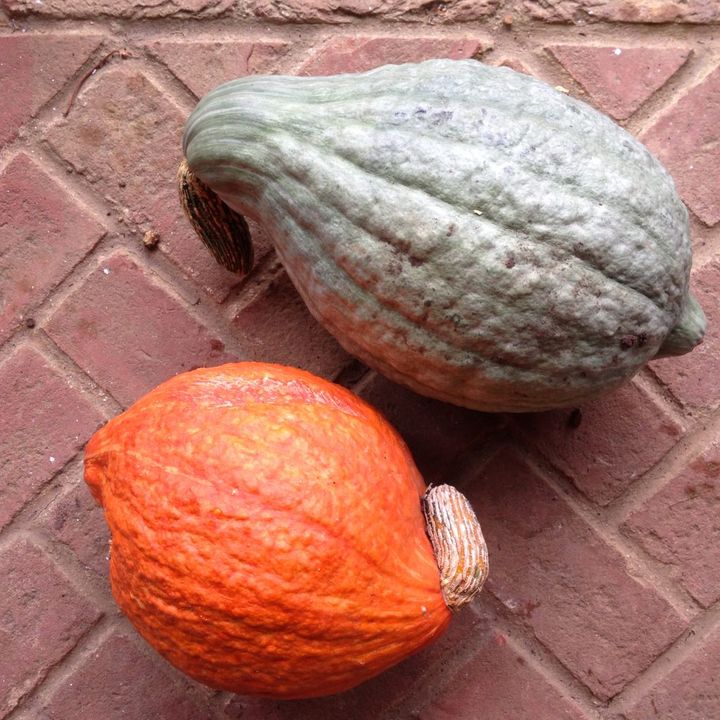 Hubbarbs are large, flask-shaped squash that come in ‘Blue’, ‘Green’, and ‘Golden’ versions. Again, they are not very practical to peel but I find them so beautiful that I grow them anyway. The inherent problem with all large squash is that it can be hard to use the whole lot before it goes off. I get round this by pressing chunks on all my neighbours. 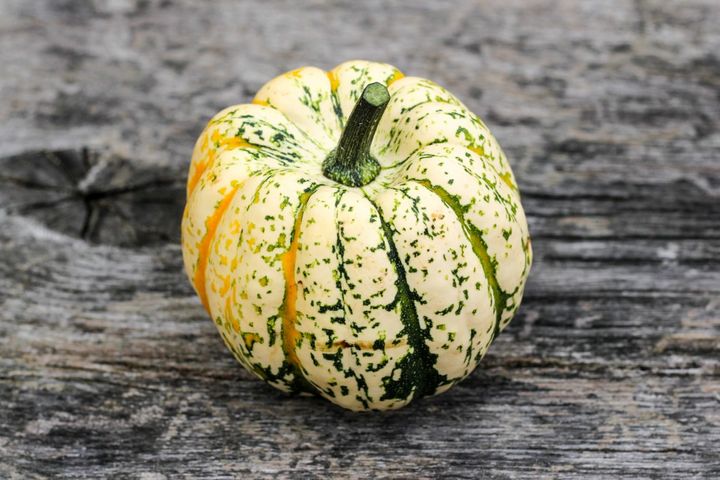 At the other end of the scale are the really small squash. These include the spherical gem types, the more oval, ribbed acorn squash and the striped ‘Sweet Dumpling’ types, of which this ‘Festival’ is one. The patterning turns orange as it ripens. Personally I find the flavour a little cloying on its own, but these fruit are the perfect size for stuffing and roasting whole.

There are a couple of others that I like – both French – but they need a long, warm summer to ripen and should therefore be started early indoors in pots. ‘Musquée de Provence’ has broad ribs, a beautiful tan skin and flesh well suited to soup. ‘Longue de Nice’ resembles a greatly elongated butternut. 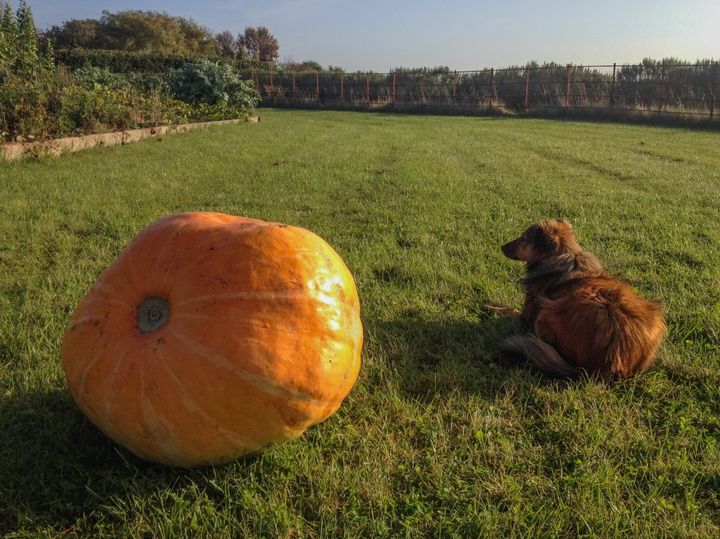 As Halloween is now looming, it seems fitting to end with pumpkins. Their more watery flesh is less flavoursome than squash, but as a result you don’t need power tools to be able to carve them. ‘Racer’ and ‘Jack O’ Lantern’ are both good cultivars for this purpose. Visually speaking, I am very fond of ‘Rouge Vif d’Etampes’, whose skin is almost red in colour, but its flattened shape makes scraping out the innards trickier.

If you want to grow a real big’un, try ‘Atlantic Giant’. The one shown here, with Great Dane for scale, weighs a trifling 45kg. The current world record stands at 953.5kg!

Be sure to check out some of Jamie’s squash recipes in time for Halloween!.