The arrival of August is always welcome to a gardener. There is still sowing, planting, watering and weeding to do, but the urgency of the last four months winds down at this time of year.

Plant growth, even that of weeds, begins to slow too, and it is finally possible to stand back and admire what has been achieved over the preceding four months.

Harvesting – enjoying the proverbial fruits of labour – is now the priority, and very nice it is too. August is a bountiful month, and the focus shifts from the garden to the kitchen. What cannot be eaten now must be stored for later: dried, pickled, jellied, jammed or frozen (make sure to read up on a few tips for freezing). 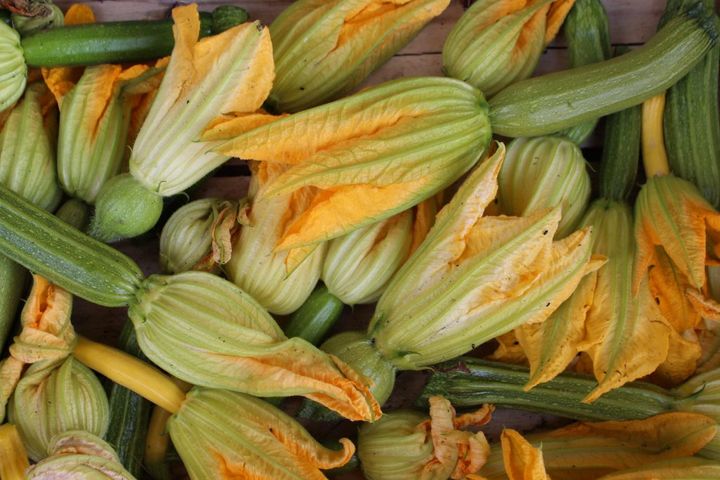 Courgettes – or zucchini, as they’re known across the pond  – start to crop in July, but it’s in August that they are unstoppable. Three plants are usually enough for a family. Left unpicked, the fruits quickly mature into marrows – great watery zeppelins that aren’t much use to anyone – and further production will cease. The trick is to check plants carefully every day or two, and pick them small.

The inevitable glut calls for creativity that goes beyond creamy courgette pasta (good though it may be). Try pickling little ones with chilli, like gherkins. Grate, salt, and wring out larger ones for a spectacular frittata, or cook them down slowly with garlic and use as a bruschetta topping with garden mint. Large ones can be souped – adding lovage will give it the oomph it needs. Stuff, batter and deep-fry the flowers before they even get the chance to become fruit. 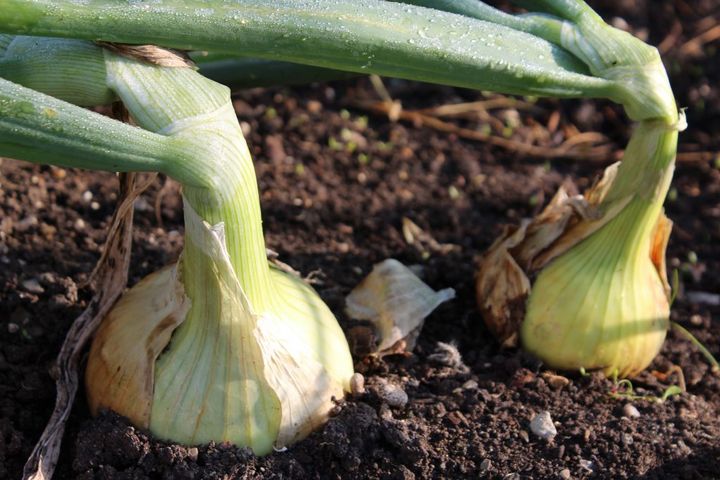 Onions are cheap to buy, but often poor quality – soft at the neck and on the verge of sprouting. If treated nicely, home-grown ones will keep for much longer.

Onions can be harvested at any point, but only fully mature bulbs will keep properly. Once the leaves bend over and start to die back, lift them gently with a fork. Yanking them out can cause damage and invite rot, as well as bruising. Leave them somewhere dry and warm (preferably outside) for a week or so, till the skins turn papery. Then place them in a net bag – or try your hand at plaiting – and hang them up somewhere cool and airy. 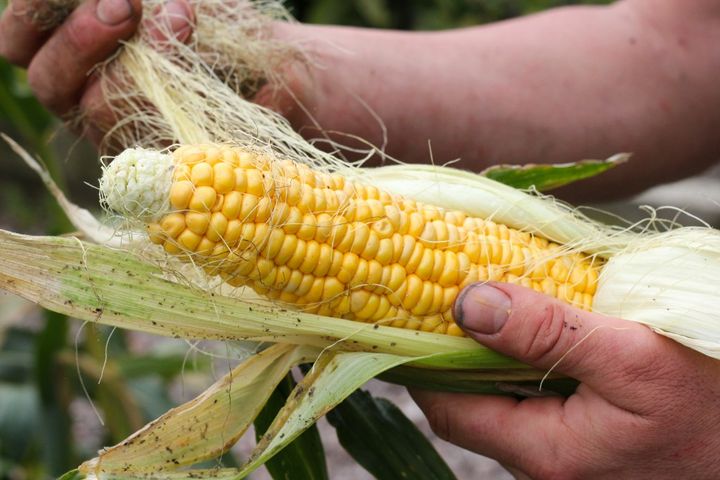 Truly fresh sweet corn is a revelation, sweet enough to eat raw. As soon as it’s picked, however, the journey to starchiness begins. Gardening lore states that water should be ready and boiling on the stove as you go out to harvest.

Judging ripeness is easy once you know how: once the ‘silks’ at the end of the cob have turned brown, peel back the sheathing leaves and pierce a kernel with a thumbnail. Milky juice should be released. If it’s watery, it’s under-ripe; if it’s doughy, you’re too late.

Use your sweet corn in a gorgeous chowder, or take advantage of the lasts weeks of summer and get them onto the barbeque.

Raspberries taste so much better warmed by the sun than chilled by a fridge – in fact, I’ve very few suggestions for what to do with them, since I only ever seem to scoff them by the handful straight from the cane.

Summer varieties are available from early July till the end of August, depending on variety and location; autumn ones from mid August till the first frosts. The two types have different pruning requirements, though neither is difficult to grow. For the former, I recommend ‘Valentina’, which bears enticing apricot-coloured fruits. ‘Polka’ is a better autumn cultivar than the ubiquitous ‘Autumn Bliss’ and it looks stunning in a bowl (or palm) with yellow ‘All gold’. I’ve yet to be defeated by a glut, but I gather they freeze rather well.

If you manage to get any raspberries back to your kitchen, I can heartily recommend incorporating them into a tomato carpaccio, as Jamie magazine have done – it may seem like a strange pairing, but they add a lovely tang. And speaking of tomatoes… 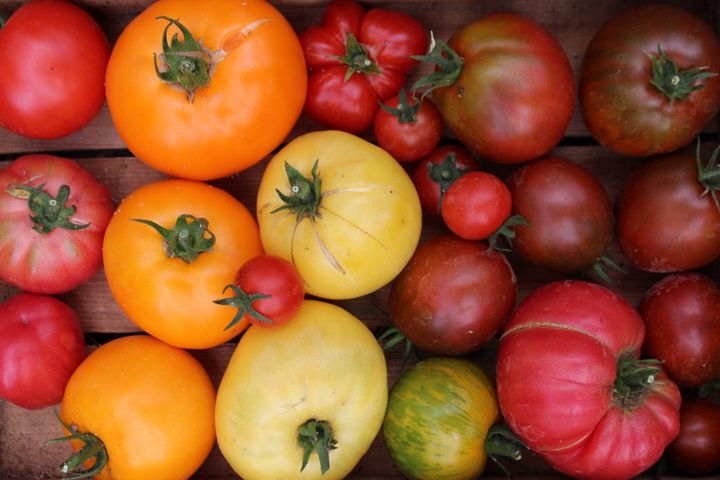 Outdoor tomatoes are a bit hit and miss in the UK. Whilst cherry varieties ripen reliably in warmer countries, the season is normally abruptly curtailed at some point by the arrival of potato/tomato blight – the very same disease responsible for the devastating Irish potato famine of 1845. Whenever a crop of mine fails, I’m just thankful I’m not a subsistence farmer.

Greenhouse tomatoes usually survive. Though their flavour is not quite as good (the stresses of outdoor life are beneficial, I reckon), they’ll still be in a different league to anything you can buy. Commercial varieties are more often selected for their keeping qualities and tolerance of travel than their taste. A glut of tomatoes is a wonderful gift – boil them down and freeze the sauce for an instant blast of summer sunshine in the depths of winter.

There are so many varieties that I love. For starters, try (in increasing order of size) ‘Sungold’, ‘Indigo Rose’, ‘Costoluto di Parma’, ‘Green Zebra’, ‘Japanese Black Truffle’, ‘Ananas Noir’ and ‘Brandywine’. 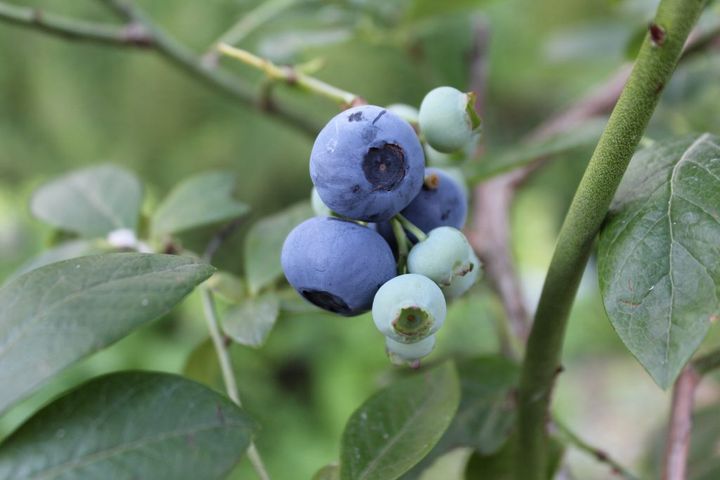 Given acidic soil or a large container filled with ericaceous (acidic) compost, blueberries will grow happily in UK gardens. Bushes are self-fertile, but the cross-pollination that results from having two or more increases individual yields considerably. A warning: blackbirds will magically strip the lot the instant they reach peak ripeness, so net your bushes after after the berries have formed. 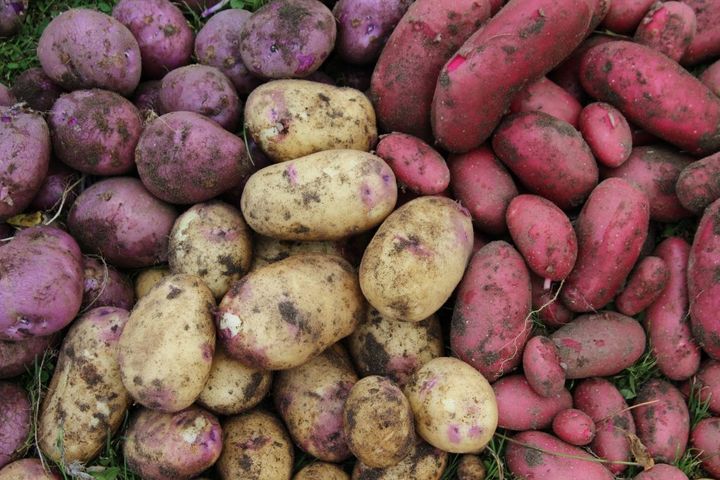 The choice of maincrop potato cultivars is enormous. They are suitable both for eating fresh and for long-term storage. As with all spuds, approach the crop with the fork at right angles to the row to minimise the spearing of tubers. Push it right under and lift the whole plant out. Dedicated potato forks have flat tines and are a joy to use (nice old ones can be found on eBay).

Leave tubers outside for a few hours to dry off (choose a dry day for lifting) then store them in paper or hessian sacks somewhere cool and dark. Exposure to light turns them green and poisonous. Check them once a week for signs and chuck any that show signs of rotting. I’m still trying to work out my favourite cultivars, but I can tell you that ‘Arran Victory’, which dates from 1918, makes superb roasties, and ‘Pink Fir Apple’ is a superb, if knobbly, salad spud that’s perfect for something like this beautiful salmon salad. 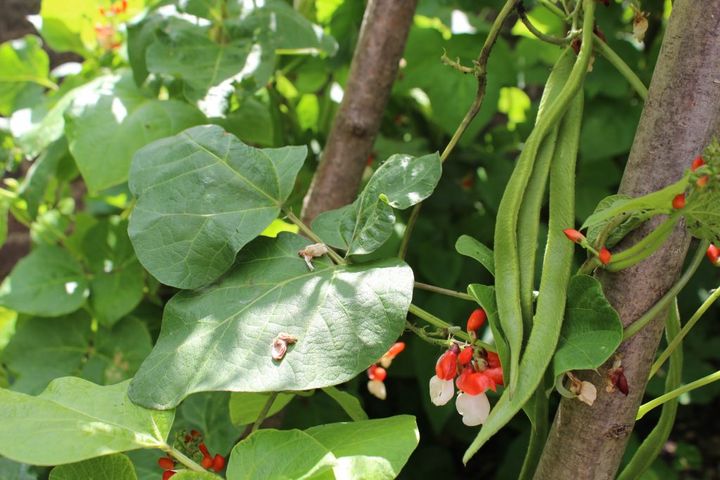 British gardeners seem to favour the runner variety above all other beans (with the possible exception of the baked bean). A wigwam festooned with their showy blooms is an archetypal summer sight in these islands. On the continent, however, the more delicate but lower-yielding ‘French’ bean holds sway. Keep them well watered once pods start to form, and pick every day – if you miss a pod and it matures, that plant will stop cropping. Succeed in this (not at all easy!) and they’ll keep going right into autumn.

That’ll do for now. August is too fruitful a time for me to include all the available crops at once, so look out for this lot now and keep your eyes peeled for part two towards the end of the month.