Jammie biscuits, filled with buttercream as well as jam, have been a staple in the UK for over half a century, but they are popular worldwide in many variations on the same theme, from Viennese whirls to a French version catchily called “Gateaux Sables Nappage Fraise”.

According to the makers of the famous Jammie Dodgers, Burton’s Biscuit Company in Wales, their biscuits were named after Roger the Dodger from the Beano comic. They have a bit of a celebrity following, including Matt Smith’s Doctor Who, comedian Harry Hill, the pop music star Labrinth, as well as the cast of The Only Way is Essex – famous biscuits indeed!

At the heart of my own jammie biscuit is a gorgeous traditional Scottish shortbread recipe that follows the “1-2-3” rule, where we mix 3 parts flour with 2 parts butter and 1 part sugar. We use icing sugar in our recipe rather than caster because we think it makes a really fine, smooth dough, which translates into a mouth-wateringly short – or crunchy – biscuit after baking. Filling our biscuits with Burton leave buttercream out of their recipe, and their jam is smooth as smooth can be. We love buttercream in ours, but the original Dodgers still taste great, and naughtily I still buy the odd packet!

I love working with words, typography and design at my bakery, and I’m always thinking up new ways for our bakes to really communicate with the people who are about to eat them! I first had the idea of cutting words out of the dough (rather than the traditional heart shape) quite a few years ago. I had used alphabet cutters a lot to write icing messages on birthday and wedding cakes, and put two and two together one quiet Sunday morning while baking jammie dodgers at home, long before Bee’s Bakery was set up.

Alphabet cutters aren’t too tricky to get hold of online, but there are plenty of creative alternatives to cut the centre out of your biscuit. I’ve found that a little shape cutter, such as a heart shape, or a carefully-used fine-point knife to cut a triangle shape can give a great effect. You could even use the plastic part of a ballpoint pen (with the middle bit removed) to cut out small circles to represent polka dots, or join the circles up to make a smiley face shape.

We like BIG biscuits, so ours are around 10cm across, and these ones can accommodate three letters as you can see in the picture.  As a result, we’re continually racking our brains to think of new three letter words and acronyms – “LOL” and “OMG” being our favourite recent additions to our biscuit lexicon! I’d love to hear any new ideas in the comments below…

You can buy our jammie biscuits at Jamie Oliver’s Recipease store in Notting Hill Gate London, order online from www.beesbakery.co.uk/, or make your own with this recipe! 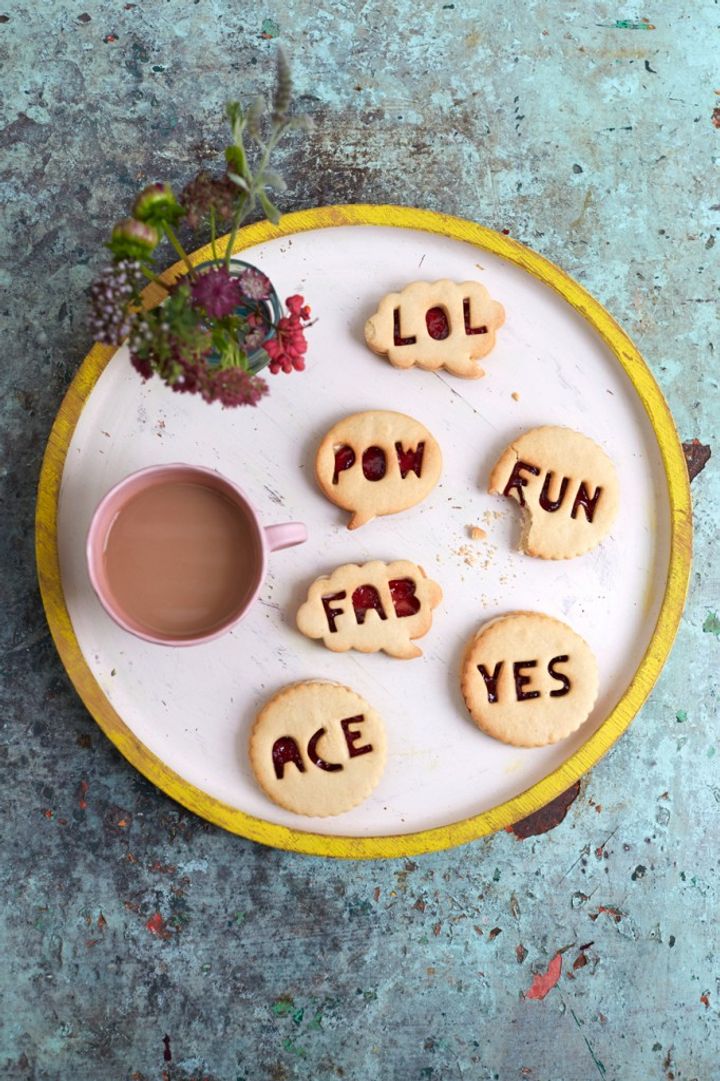 If you don’t have a round cookie cutter, you can always use the rim of a mug or a small glass (be careful) or a bread or kitchen knife (be even more careful)

In a large bowl, rub the cold butter and flour together with your hands until you have a bowl of fine crumbs. Sift in the icing sugar and mix with a wooden spoon until it’s just combined – don’t over-mix it or else it won’t hold it’s shape when it’s baked.

Add in the egg yolk and vanilla and mix until a dough forms – it’ll be a smooth, fairly firm dough that’s slightly sticky to the touch. Place the ball of dough on top of a piece of clingfilm, sandwich with another piece and roll the dough out between the two until flat. Chill the slab of dough in the fridge for 30 minutes and it’ll harden up.

Step 2: Roll and cut the dough

Roll the dough to 1cm thick on a heavily floured surface – this shortbread dough can be sticky, so try to work quickly, keeping it as cool as possible. Using your fluted circle cutter, cut as many rounds as you can, remember to cut both ‘fronts’ and ‘backs’ for each biscuit. The fronts will have your shape/letters cut from the dough, and the backs will be left plain.

Using your alphabet/shape cutters, quickly and carefully cut your messages or shapes from the dough. Transfer the cut cookies onto the baking sheet and chill again for 20 minutes. While it chills heat your oven to 170°C/350°F/gas mark 3-4.

Place your biscuits in the oven and bake for 7-10 mins, until they start to just turn golden brown. Set them aside to cool.

Turn your Jammie ‘backs’ onto their backs and spread a nice even layer of jam in the centre, leaving a border and making sure that once the ‘front’ is added, you’ll only see jam through the hole. Using a piping bag with a thin tip cut, pipe a nice round circle of buttercream around the edge of the jammie to seal it and prevent the jam from escaping. Chill until set and EAT!

These jammies will last around 10 days if kept in an airtight container.