Italy is one of the world’s greatest food nations. Its climate and geography mean that it produces an abundance of wonderful ingredients, and due to its position in the centre of the Mediterranean it's had influence from the rest of Europe, Africa, and the Middle and Far Easts over thousands of years.

Italy’s larder and recipes are inspiring and unforgettable, and any visitor with even vaguely active taste buds will find themselves learning and discovering new and wonderful things to eat from start to finish.

The regions of Italy have only been united as one since the early 20th century. This means no two cuisines look quite the same, which makes the country all the more exciting to explore. Even classic dishes are prepared in slightly differently across the country – village-by-village, grandmother-by-grandmother.

Here are some of the most important foods and drinks from across the country. 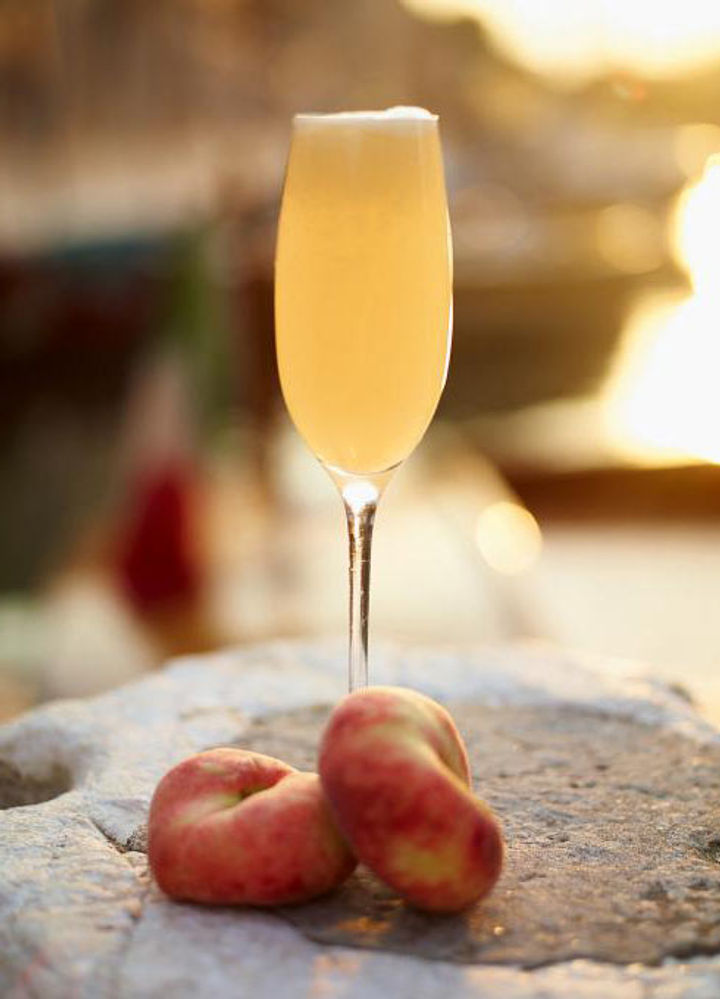 This classic cocktail of peach and Prosecco originated in Harry’s Bar in Venice. It’s often made with ready-made peach purée, and that’s fine, but when made with fresh peaches it’s in a different league entirely. Italian white peaches are perfect for this, and they’re at their best in May, when spring turns to summer. However, you can use any that are ripe and delicious, whether it’s white peach, yellow peach, or even nectarine – if it’s fruit that’s ripe, sweet and perfumed, it will make great Bellini! 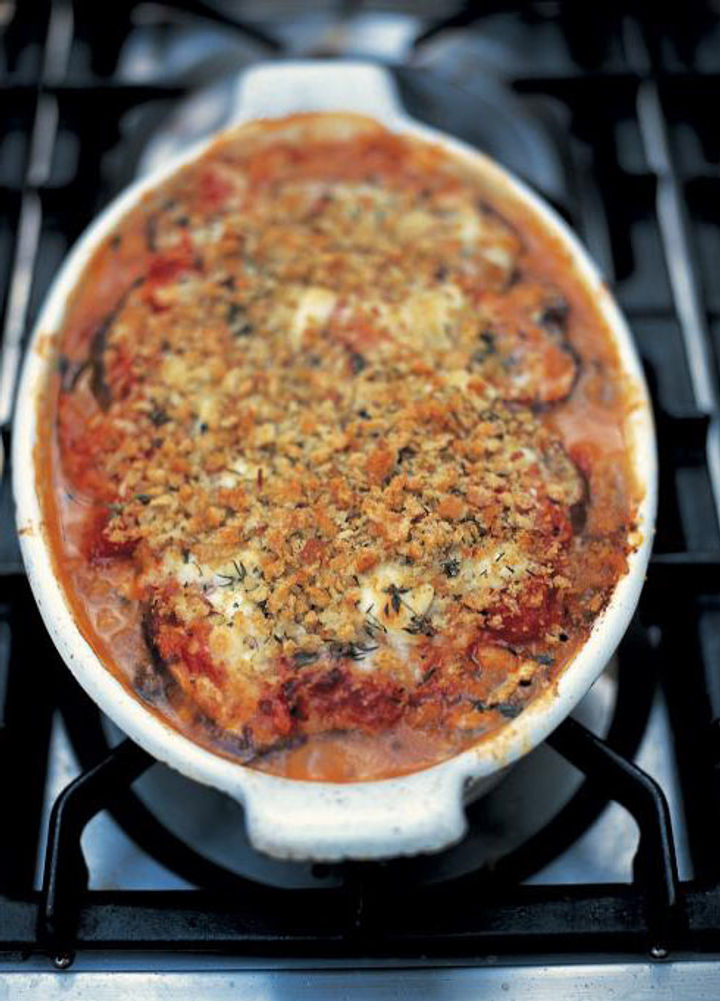 Parma is one of the main towns in the region of Emilia Romagna, thought by many Italians to be where the best food in Italy is found. “Alla Parmigiana” means “as a lady from Parma would make”, and when an Italian dish bears this name you can expect to find lots of Parmesan cheese used.

Parmesan is made in large lumps of curd that are then split into two to make two wheels, meaning each Parmesan has a twin! They’re aged in large warehouses on special wooden planks for years and the outside of the cheese is flashed with a blowtorch and polished frequently to make it hard and shiny. 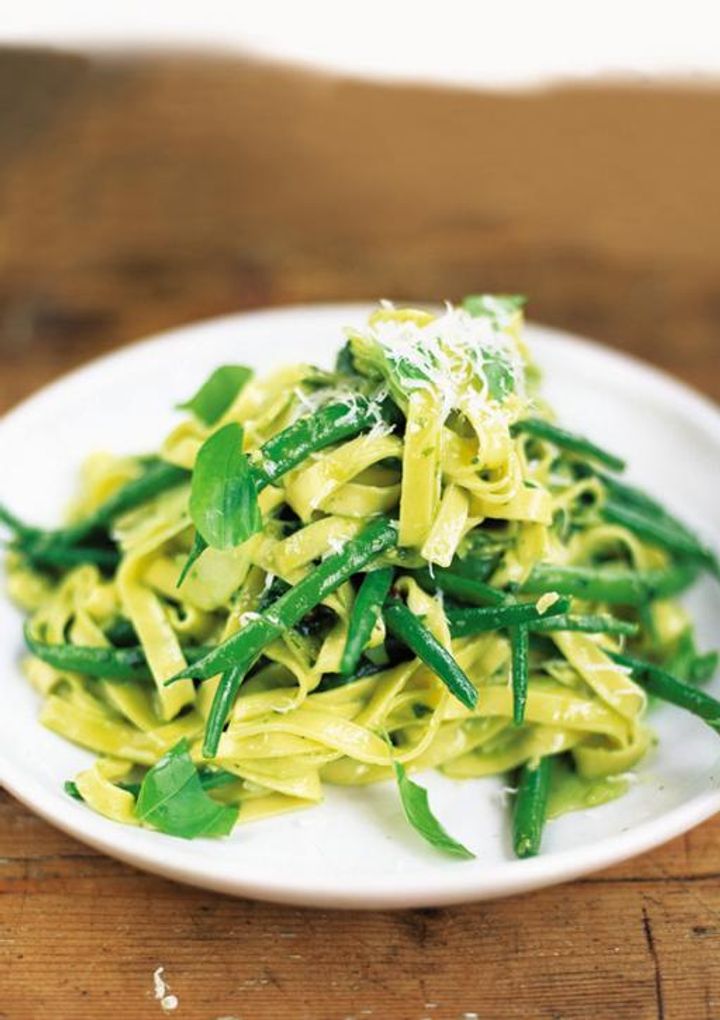 Liguria, located on the Mediterranean coast by the French border, is best known as the home of pesto. Although this much-loved sauce is usually made with basil and pine nuts, different versions can also be made – usually by switching the herb, nut, or cheese used. Salsa di noci is a variant made with Italian parsley and fresh walnuts. Many people use a mix of Parmesan and pecorino, to give a creamier taste. Potato and green beans are also common, and may seem like unusual things to mix through pasta, but it’s actually very traditional and super delicious! 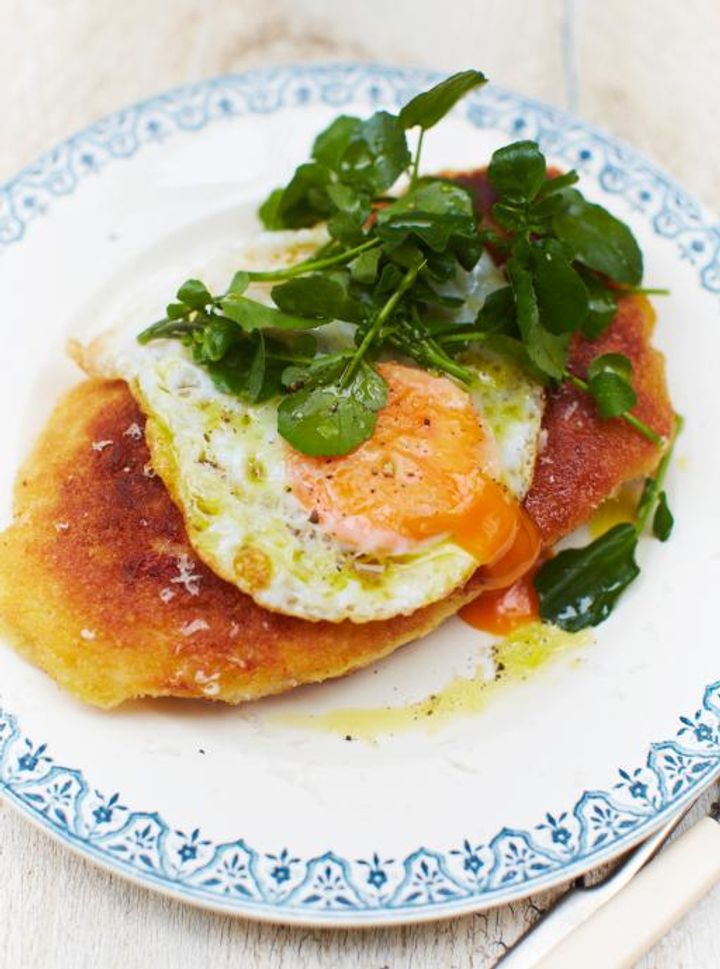 The great Gennaro Contaldo, Jamie’s friend and mentor, is most definitely from the south of Italy, having been born and raised in Minori on the Amalfi coast. He has also spent time cooking in the north of Italy, however, and it’s from there that his fantastic recipe for Turkey Milanese originates. Gennaro adds prosciutto and fontina to the Milanese classic in his recipe and tops it with a fried egg – the yolk from which can make a lovely sauce for the dish once popped. Try it, it’s stunning! 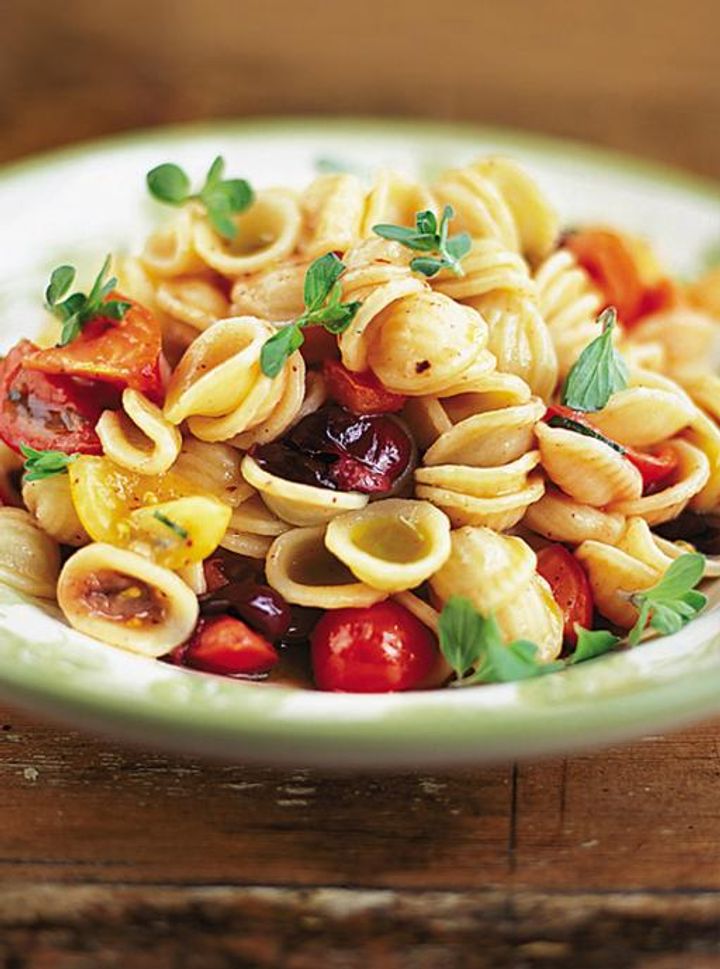 Orecchiette means ‘little ears’, and they’re made and eaten often down in Puglia – the “heel” of Italy. They’re the perfect shape for catching the best bits of chunky sauces, and are often paired with broccoli, chilli and anchovy sauce, or tomato ragu made from the beautiful tomatoes that bake in the sun all over the region in the summer. Don’t ever throw out any super ripe tomatoes that are starting to get slightly squishy – make this sauce, because it’s best when the tomatoes are in such a state! 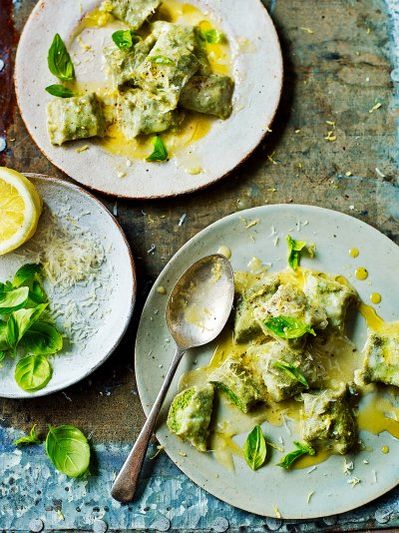 “Gnudi” means “nude” in Italian, and this dish is so called because these delicious little lumps of seasoned ricotta are basically “naked” ravioli filling (ie. without the pasta). It’s a really lovely variation on gnocchi, and we saw first saw it in a little country trattoria in Tuscany.It’s typical of the brilliant ingredient-led cookery found all over the region.

Don’t forget to use good quality ricotta, and the nutmeg is a must. Make sure to leave the gnudi to sit in the semolina flour for several hours, as this will create the coating that will keep them together when they cook. 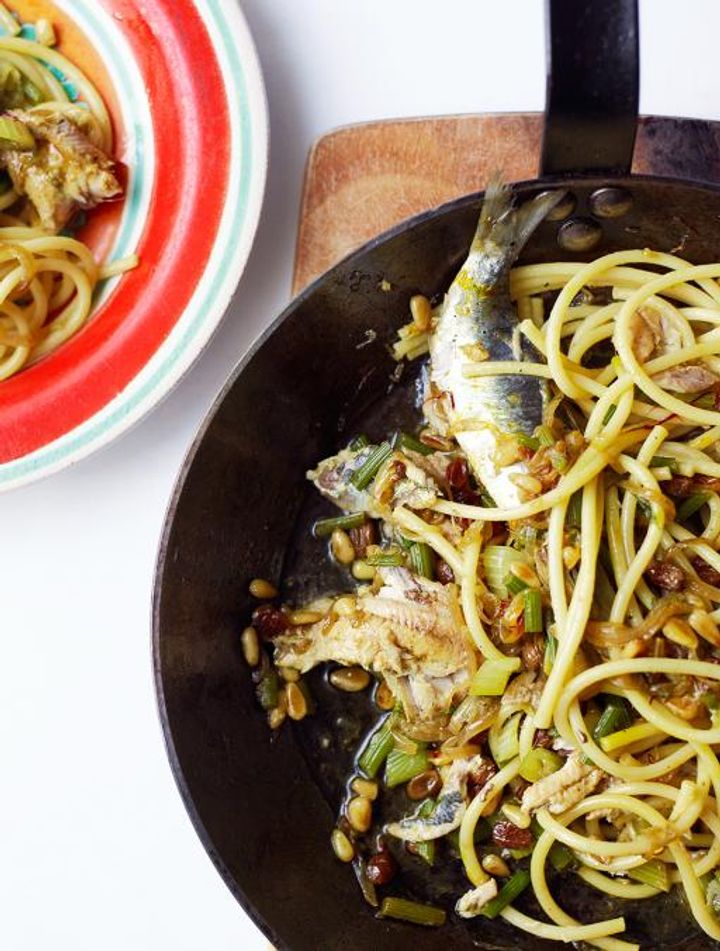 Sicily is a really special food destination in Italy, boasting ingredients and flavour combinations not found anywhere else in the country. This pasta dish is a perfect example, with very fresh, oily sardines combined with sweet raisins, onions, aniseedy fennel bulb and fronds, toasted pine nuts, and olive oil. When made with love and care it’s, an amazingly easy Italian recipe that’s greater than the sum of its humble parts. 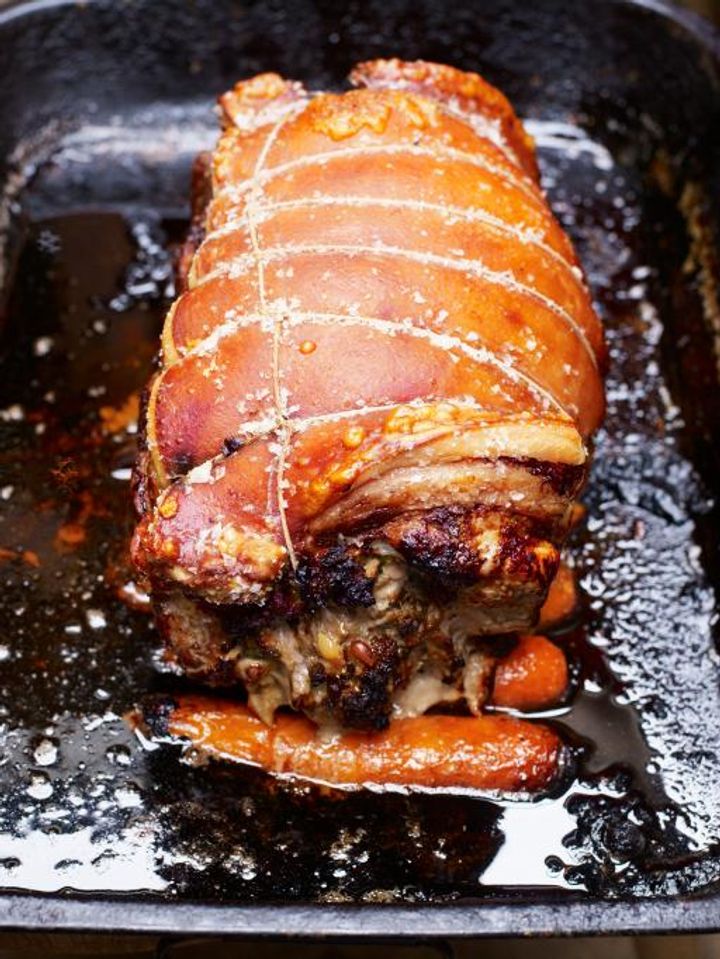 Lazio and the city of Rome have many fantastic dishes to claim as their own, but one of my very favourites is the porchetta. Although made all over Italy, it’s done especially well in the hilltop towns south of the city.

It’s no mean feat to bone and stuff a whole pig before spit-roasting to crisp perfection on the outside and tender succulence on the inside, but it’s honestly worth all the effort. Don’t worry about there being too much – some would say porchetta is at its best served cold in a panino the next day. 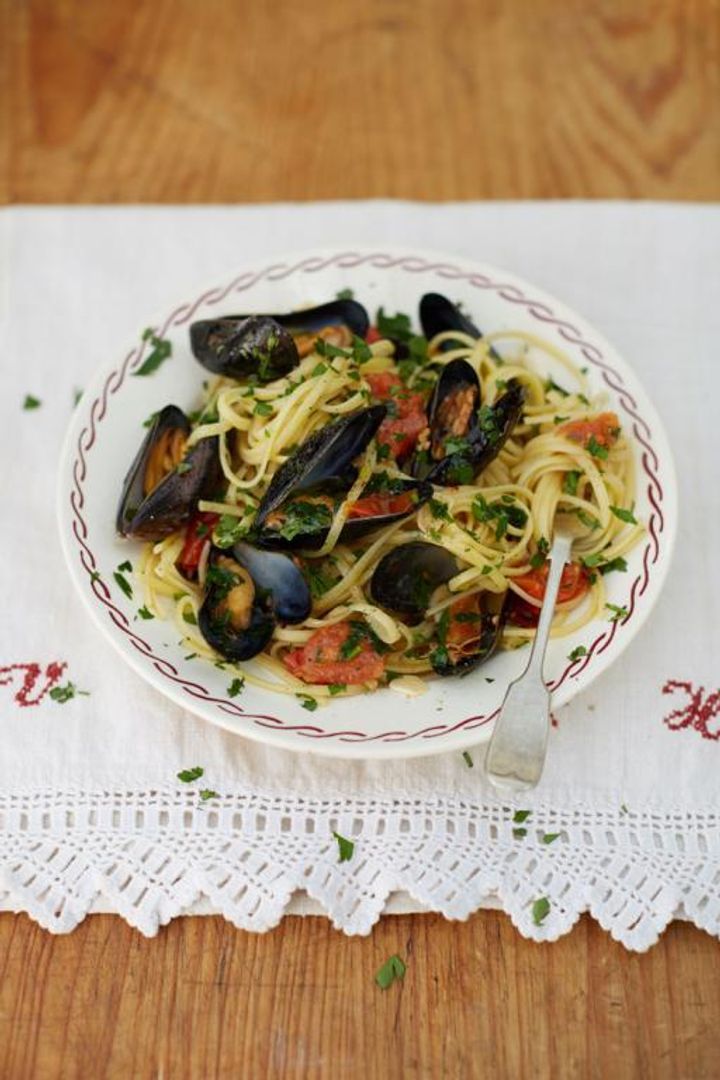 Jamie cooked this for Gennaro Contaldo’s father in a tiny cottage up a mountain above the town of Minori during the filming of Jamie’s Great Italian Escape. I’ve never seen him so nervous! He cooked the pasta twice over before he was happy with it, and smiled a mile wide when he got the nod from ‘Nonno’. He should never have been worried though – the quality of the fish and seafood caught off the Amalfi coast and brought to market every day is such that he could never really have gone wrong. 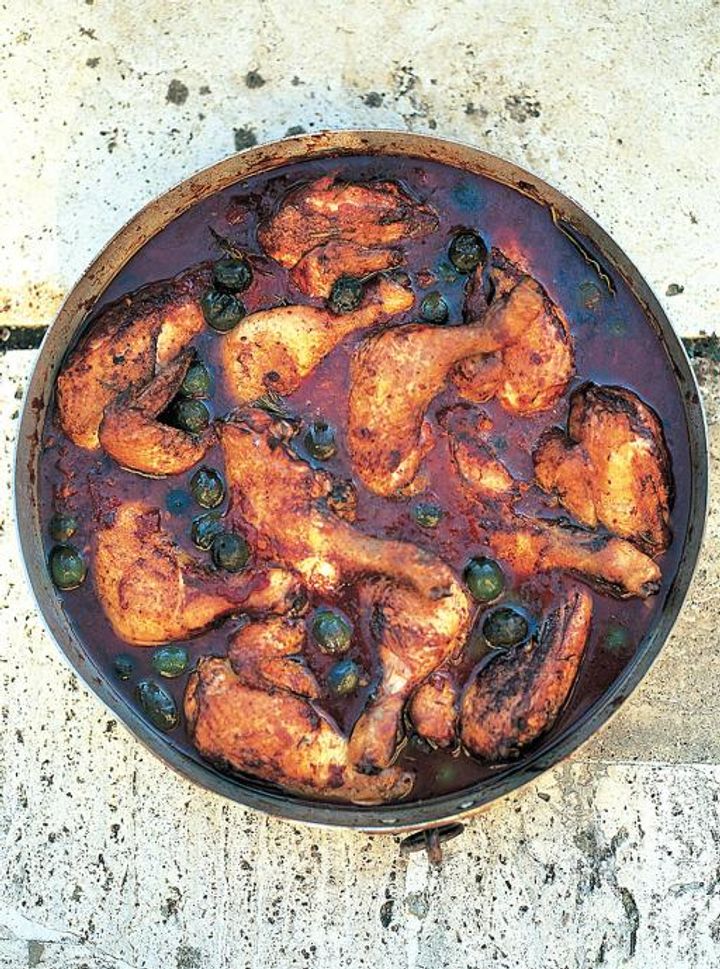 “Pollo alla cacciatora” – or “chicken in the style of a huntsman’s wife” – is one of the most famous Italian dishes to be found outside Italy. It’s often made badly by non-Italians with all kinds of ingredients ending up in the pot, so we researched the recipe in old Italian cookbooks before we came up with this recipe. The chicken in the picture spent 36 hours in a bottle of Galatrona wine from the Petrolo estate (that’s why it’s such a nice colour!), but the rusticity of the dish reminds me of the beautiful wild mountains in Le Marche to the east. 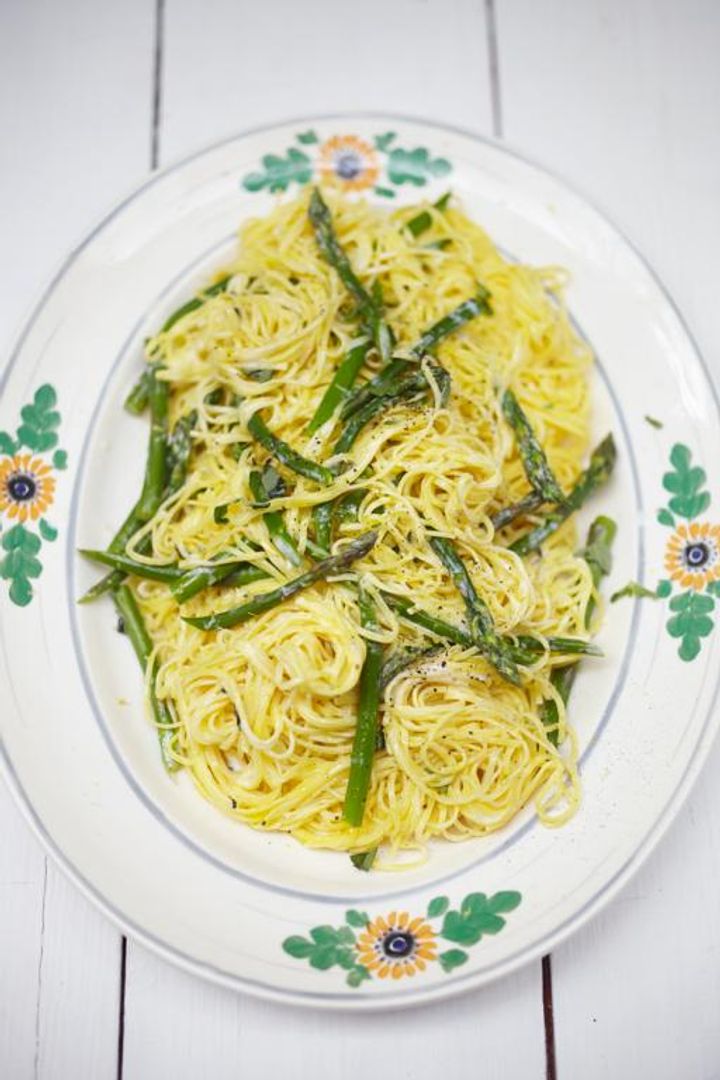 This looks like it might be complicated, but is in fact a beautifully easy Italian recipe. Fonduta is a rich, delicious melted cheese sauce. It’s found up in the Italian Alps, in the regions of Piedmonte and neighbouring Val D’Aosta, and is made with the various artisan Alpine cheeses made in the mountains. It’s traditionally served as a fondue with various things to dip in it, but is also fantastic with fine egg pasta. I’ve even had it on a bowl of new-season’s polenta with a fried duck egg and some shaved white truffle.

Fonduta and asparagus is always a great combination, but they come together particularly well in this dish, with fine egg tagliatelle and fresh marjoram leaves.

Still curious, or just hungry? Have a browse through all our incredible Italian recipes. 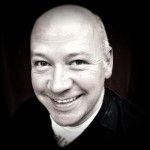