“I was lucky enough to be living in Brazil when we won the World Cup in 1994,” says Marcello Tully casually. “Before every game that Brazil played the streets were like a carnival. Kids would be on the back of pickups cheering, the drivers beeping, flags everywhere. Then as soon as the game started the streets would be 100% deserted. It was spooky.”

Marcello is the only Brazilian-born Michelin-starred chef in the UK, but understandably it’s football that’s on his mind at the moment. His home country is hosting the greatest sports event in the world, but he’ll spend the launch night in a hotel kitchen on the Isle of Skye, Scotland. For a Brazilian, that’s pretty hard to stomach. 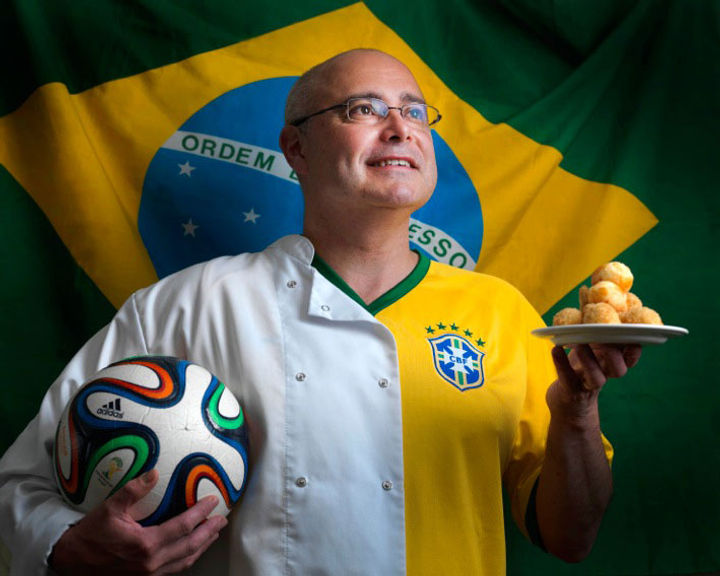 “It’s like a religion over there. When Brazil score in a World Cup people let off fireworks, and when we win a game we party through the night. It’s a way of life. But that’s the culture of Brazil – any excuse to get some music on and have a good samba.”

They need no excuses this year. They are hosts and in most bookies the favourites to win, so expect the commercial productivity of the country to take a severe dip as workers keep running outside to let off those fireworks. That party culture and lust for life extends to everything, from sport, to music, to food. It’s therefore surprising to hear that, until recently, Brazilian chefs were not half as revered as they are in say, Italy or France.

“I knew I wanted to be a chef from a very early age, but my father didn’t want me to. Back then, if you were a chef in Brazil it was probably because you didn’t have a very good education and possibly couldn’t read or write.”

But Marcello – and apparently his mother – were determined. By 14 he was working as a chef, and he now runs the restaurant at Claire McDonald’s Kinloch Lodge in Scotland, which has a Michelin star and three rosettes.

He left Brazil for England when his parents separated, but he visited his mother in Sao Paulo every school holiday, absorbing as much sun, culture and food as he could before returning home. 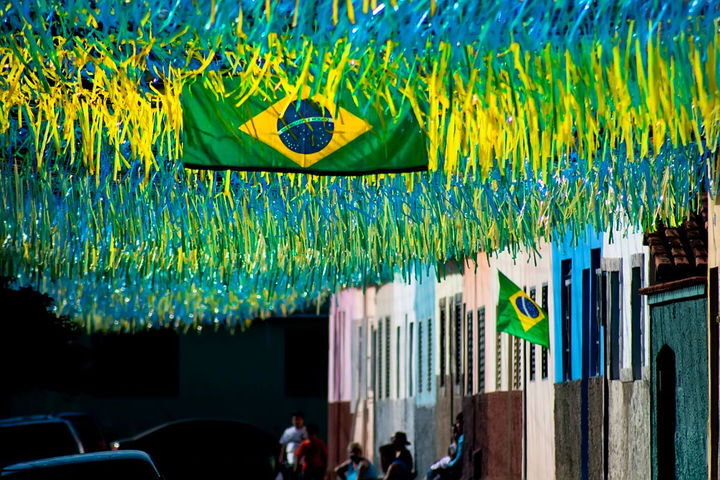 This jet-set lifestyle created an exciting infusion of influences in him that meant he quickly came to the attention of Albert Roux. In the kitchen he shows the kind of flair that Brazilian footballers are known for on the field.

“I worked with Albert for six years, at La Gavroche, Roux Britannia and Gavvers. So when people ask me what my cooking style is I say I cook classical French food, but at Kinloch I’m using Scottish ingredients and adding a Brazilian influence. I always try to include Brazilian flavours, so a lot of fruit in both savoury plates and desserts. I also enjoy incorporating very humble food, particularly Brazilian street food, into complicated dishes.”

It is the street food of his home that seems to get Marcello most excited, and you can picture him as a boy, then living in slow-and-sedate middle England, wondering the streets of Sao Paulo, amazed by the exuberant way Brazilians live and intoxicated by the sights and smells of the food. In a nation that prides itself on hosting parties and enjoying being together, the food has to be practical. All the dishes Marcello waxes lyrical about are finger foods, served from street sellers wraped in paper and made to be shared. During the World Cup he’ll be serving up these bite-sized snacks as canapes at dinner in the hotel.

“One thing I’m going to be doing is acaraje, which are basically black eyed beans which have been peeled and crushed into a paste, then deep fried in palm oil. Once it’s cooked you cut it open and traditionally fill it with chicken, but at Kinloch we use langoustine, and where I was born in north-east Brazil they stuff them with vatapa, which is a shrimp-based filling. 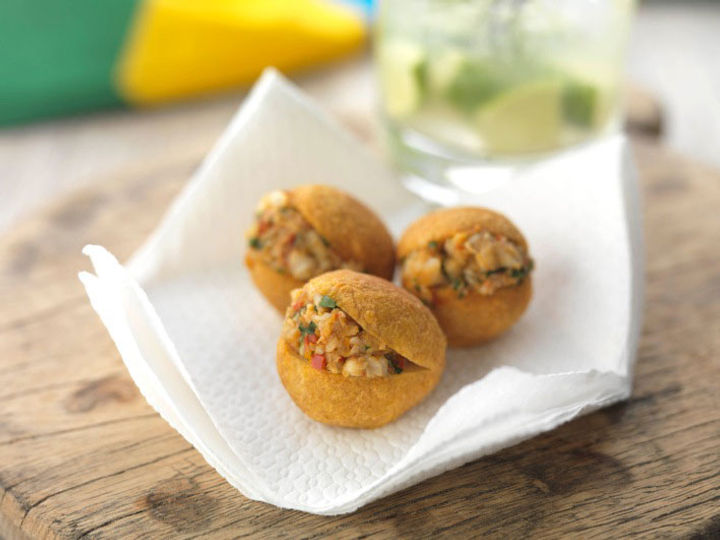 “They serve the acaraje from little carts. Basically they have a big wok for frying out in the streets, and the smell it creates there is absolutely delicious. It’s really authentic Brazilian street food, but only in the north. Down south you get more of the coxinha.”

Marcello is at pains to explain that Brazil is enormous – essentially the size of mainland Europe – so the food varies wildly from north to south. He was born in the coastal city of Macieo in the north, which is mostly influenced by African cuisine, with rice and beans (or feijoada) being the staple diet. Down south in the metropolises of Rio and Sao Paulo, the food is more Mediterranean, usually Italian. That said, the Coxinha has none of that heritage, and is authentic enough to make it on to Marcello’s menu for tonight’s opening ceremony and first game, Brazil versus Croatia.

“Coxinha basically translates into “little chicken thigh” but it isn’t thigh, it just resembles one. It’s actually a dough filled with shredded chicken then breadcrumbed and deep fried. It’s served all over Brazil, and I’ve eaten so many of those in my time over there. Instead of chicken though, I’ve put a local smoked Cheddar in it and served it with a beef dish. So it’s taking something from Brazil and serving it with Scottish ingredients.

These are the dishes that Marcello will be cooking up for diners at the hotel tonight but his mind is back on football again, the two things that seem to define Brazil.

“Obviously I’ll be working tonight, but I’m hoping I’ll be able to slip away in time to watch the game. For the tournament I’ll 100% be supporting Brazil. I have two sons and they will be too. So when I get home we’ll put some Brazilian street food on the table and get the party started.”

So you can get into the Brazilian spirit, Marcello has given us a recipe for the traditional coxinha. Deep fried chicken and football? Life doesn’t get much better, whether you’re Brazilian or not.

Finely chop the carrot and one onion and sweat in a frying pan for 2-3 minutes. Add the cold chicken stock, bay leaves and chicken breasts, then bring to the boil and simmer. Cook the chicken breasts for 15-20 minutes, or until cooked through, then remove from the liquor to cool.  Sieve the liquid to remove the vegetables, then discard them and put the liquor to one side.

Once cooled, shred the chicken by hand, then mix with the lemon juice and cream cheese. Finely dice the second onion, then in a small frying pan, add the butter and sweat off the onion for 2-3 minutes. Meanwhile slice the garlic and ad dit to the pan to sweat for 1-2 minutes.  Once cooked, add this to the chicken mix.

Measure out 360ml of the stock (top up with water if you don’t have enough), bring it to the boil, then gradually stir in the flour and cook for 2-3 minutes, stirring vigorously all the time.  The mixture will become a stiff dough which you need to cook for a further 5 minutes, moving all the time around the pan. Remove from the pan and chill in the fridge for an hour.

When you’re ready to go, whisk the eggs together in a bowl and place the breadcrumbs in another large bowl and season with salt and pepper.

To shape the Coxinhas, flour your hands and take a piece of the dough about the size of a golf ball. Roll it into a ball, then hollow out the middle for the filling. Press 1½ teaspoons the chicken mix inside the dough ball, and press the dough closed around the filling and shape it into the chicken leg shape. Next, dip the coxinhas in the egg and roll them in the breadcrumbs to fully coat them. Put them on a plate and leave to chill in the fridge for about an hour.

Finally, in a large pan, heat the palm oil to 160°C/340°F and deep fry the coxinhas until deep golden brown. Serve warm in the middle of the table (and preferably in front of the football) for everyone to dig in. 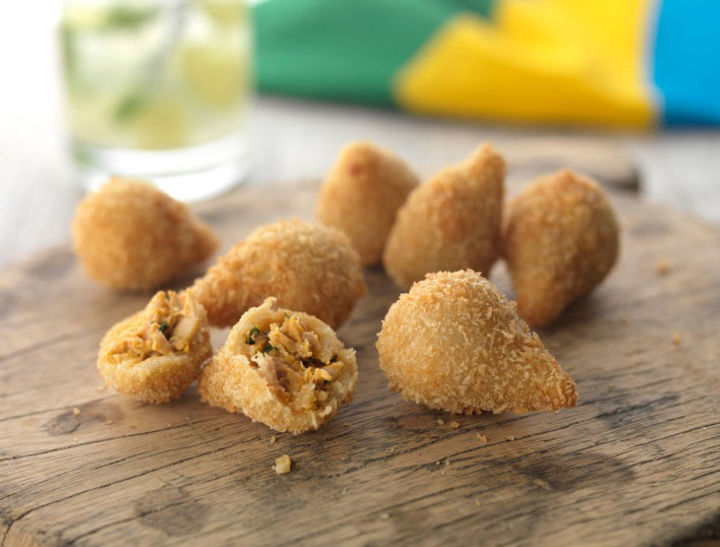