2013 was the year of the burger. The USA’s most famous foodie export took over the food scene in London, and gone are the days of limp, dry patties and soggy buns. Now Londoners queue for hours to sink their teeth into juicy, high-quality burgers with exciting sides. You can’t indulge in them every day, so if you’re going to eat something as calorific as a burger, you’d better make it a good one.

As the craze starts to spread to the rest of the British Isles, we’re giving you the lowdown on London’s most likely to succeed and reach a town near you. To help out, we’ve enlisted Food Tube’s rad southern soul expert and all-round meat fanatic DJ BBQ. As an antidote to all those New Year detoxes, he’s been chomping his way around London to give you an in-depth guide of the best of the baps.

Starting in 2009 as a small, much-loved pop-up called Meat Wagon, MeatLIQUOR has gone on to become a successful restaurant chain, opening four more sites in London. They recently opened a branch in Brighton too, and there are plans to set up shop further a field.

“Their Dead Hippie burger is the juiciest burger on offer, because the great-quality meat is cooked daringly rare and the patty isn’t packed too tight, which allows the juices to really get going. They also have great chilli cheese fries and deep-fried pickles.”

Established in 2011 in a little unit in Brixton Village market, Honest Burger now has branches in Camden, Soho and King’s Cross, and shows no sign of slowing down. Despite being a few pounds cheaper than its rivals, Honest doesn’t compromise on flavour or portion size.

“Honest follows very close behind MeatLIQUOR. Again, the patty isn’t too tightly packed, resulting in a delicious juicy burger. The Ginger Pig butcher’s meat is flavourful, and they let it sing by sticking to simple flavour combinations and radelicious sides.”

Lucky Chip started in a little van right next to Broadway market in Hackney, east London. It now has a permanent residency at the nearby Sebright Arms pub and have had stints in other cool venues across London. With lots of clever ideas about serving food, they’d be unlucky not to go far.

“Lucky Chip know how to have fun!  I love their Kevin Bacon burger and there’s always new a burger of the week. They also change their menu regularly, keeping it exciting with stuff like the Breaking Bad menu based on the TV show! The patty is full of flavour and very well constructed.”

Five Guys started over 20 years ago in Washington DC, and grew to become one of America’s most successful and highly respected burger chains – even Barack Obama is a fan! They arrived in the UK in 2013, opening in Covent Garden, and now have two branches in London and one in Reading, with more to come.

“Five Guys are very American; they remind me of home. In my opinion they do the best fries – their awesome Cajun-spiced ones. The soda machine is so cool too, there are 120 combinations and free refills! Go there for an all American burger experience.”

Byron was founded in 2007, long before the burger boom, when owner Tom Byng noticed a gap in the market for simple, good-quality burgers. With great British ingredients and an amazing beer list, the restaurant has gone from strength to strength. It now has over 30 locations in London and branches in Liverpool, Cambridge, Oxford, Manchester and Kent.

“For the price it’s a great burger, especially when you load it with bacon! For me, the patty is a little tight but it’s still tasty as hell and the vibe in their restaurants is really cool.”

So there you have it, London’s best burgers by a true connoisseur. If you know of a great burger joint in your area we’d love to hear from you, just drop a comment below. And if there isn’t a great place to grab a burger near you, why not try out DJ BBQ’s spicy burger recipe on Jamie Oliver’s Food Tube, Gennaro’s ultimate cheese burger, or Jamie’s own burger and slider recipe. 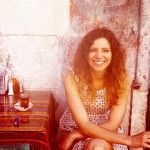 Maddie worked as a musician before she realised her love for food outweighed her love of music. As an assistant stylist on Jamie's food team, she now obsesses about food for a living! Her passion for food stems from growing up in Italy but she now likes to cook and eat anything and everything - hence why her blog covers interesting foods and places from all around the world.