So, a brief history lesson before we move onto a perfect Canada Day recipe: today, July 1st, sometimes known as Canada’s “birthday”, is a nationwide holiday commemorating the British North America Act 1867 (now known as the Constitution Act 1867), which united three British North American colonies (Nova Scotia, New Brunswick and the Province of Canada) into a single country – the Dominion of Canada – made up of four provinces (the Province of Canada became two provinces – Ontario and Quebec).

Known as Dominion Day until 1982, Canada Day is a time for casual get-togethers, and given the climate in July, most Canadians celebrate the holiday outdoors with picnics and barbecues.  Across the country, public outdoor celebrations take place too, including air shows and fireworks. It’s a time to relax and enjoy all that’s great about the Canadian summer.  Special citizenship ceremonies take place on Canada Day as well, so for a lot of newcomers, it’s a time to reflect on what it means to be Canadian.

Canada Day signals the real start of summer and with it, lots of great summer eats and drinks. Since there are no hard and fast rules for “what to eat and drink on Canada Day”, you can only imagine just how many different types of food and drinks are being consumed across the country to celebrate Canada’s national day.  When I think of celebrating Canada Day (no matter where I am in the world), three things come to mind: fireworks, beer and barbecues.

So, what’s good to eat at a Canada Day barbecue?  Given the only tradition is the casual, outdoor nature of celebration, you can serve anything you like. One of the many wonderful things about living in a country with so many cultures making up the population is that there are so many different interpretations of a celebratory meal!

My special Canada Day recipe is a bit of a mish-mash of ingredients that I think work well together for a casual meal celebrated outdoors.  It’s a kind of “Canadian” pizza (which typically is topped with tomato sauce, cheese, pepperoni, green peppers and bacon) with a built in side of beer(-caramelized onions).

The great thing about this recipe is that all of the ingredients can be prepared in advance and you can cook it outside, on the barbecue (as you finish the rest of the can of beer you didn’t use caramelizing the onions!) in the company of your guests. What could be better? 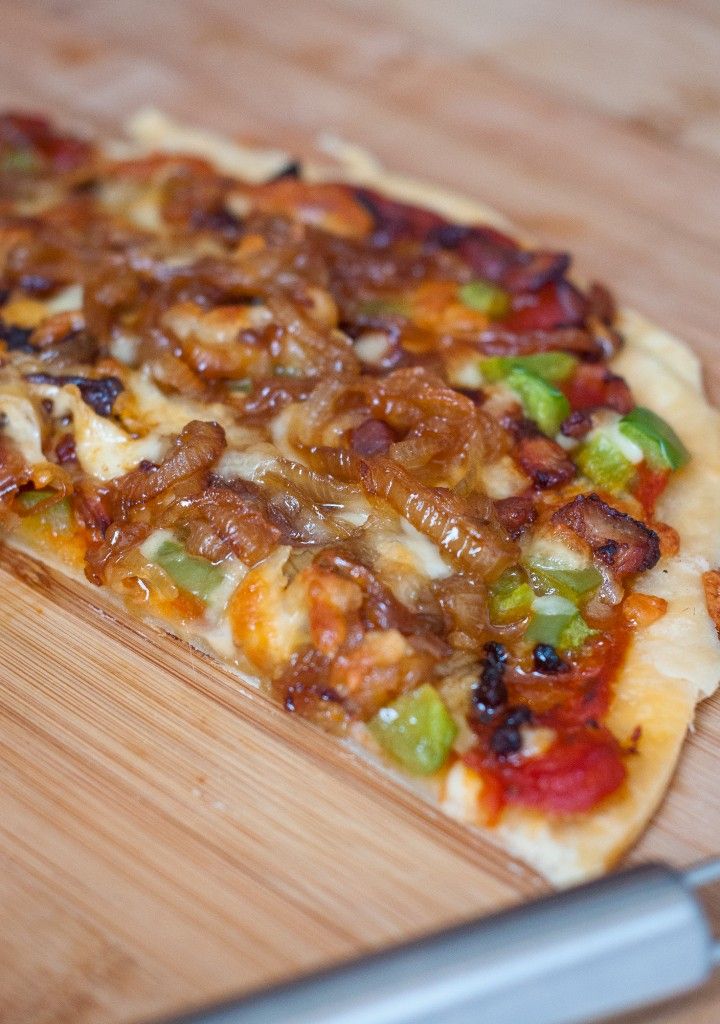 To caramelize the onions:

Melt 2 tablespoons of the butter in a heavy skillet over medium heat.

Cook the onions, stirring constantly, until soft and slightly golden in colour (8-10 minutes).

Add the third tablespoon of butter and sprinkle the sugar evenly over the onions.

Cook, stirring constantly for 2-3 minutes, until the sugar dissolves.

Increase the heat, stir in the beer and bring to a boil.

Reduce the heat and simmer, stirring occasionally, until the onions are golden brown and all the beer has evaporated (20-30 minutes).

Remove the pan from the heat and allow to cool.

If you are not using straight away, you can store these in an airtight container in the fridge.

To assemble the pizza:

Pre-heat your barbecue to high heat.

Prepare all your fillings so they are ready to go on the pizza.

Once the barbecue has reached temperature (make sure the grill is clean), place the pizza dough in the middle of the grill and cook for a few minutes with the lid closed.

After a few minutes, check to make sure the dough is not burning underneath and that it is cooking evenly. You might need to rotate the dough if one side is browning more quickly than the other. You’ll know the bottom is cooking when the top side starts to form airy bubbles.

Once the bottom of the pizza dough is cooked, flip it over and lightly oil the cooked side of the dough.

Reduce the heat slightly, close the lid of the grill and cook for a few minutes, until the cheese is bubbling and golden (keep checking that it’s not burning underneath).

Use a pizza peel or a large flat spatula to remove the pizza from the grill, allow it to rest a few minutes before you cut into it.