I’m going to start by busting a myth. Macaroni and cheese is widely thought of as being a classic American dish, served as either a main course or as a side. In fact, in the States, there is even a ‘National Macaroni and Cheese Day’ celebrated on 14th July. However, Macaroni Cheese is actually a French dish – quelle surprise! – recorded in a 14th Century medieval cookbook as “a French dish of parmesan and pasta” that was only brought to England later in the same century. In America, Thomas Jefferson was said to have encountered macaroni and cheese both in Paris and in Italy, and so he began requesting that macaroni and Parmesan cheese be imported to his home country. By the mid-1880s, macaroni and cheese had become available nationally and the dish was known under a variety of names and styles – macaroni and cheese casserole, macaroni pie, macaroni cheese and, of course, mac ‘n’ cheese. As a dish, it is the ultimate in family comfort food; warming, affordable and simple to make. I’ve also seen it making a comeback as a fashionable restaurant side-dish, too.

Traditionally, macaroni cheese is a dish made with macaroni pasta; derived from the Italian ‘maccheroni’, a tube shaped-pasta with a curve, sometimes also called ‘elbow’ pasta. Macaroni cheese can be made with a white sauce, or just butter, and you may also find it with breadcrumbs on top. As with all great dishes, there are always interesting variations to be found. My favourite addition is crispy bacon bits on top or within the sauce – in Switzerland they add roasted onions, and a topping of fresh tomatoes is a favourite.

Jamie has three recipes (at least!) for Macaroni Cheese, which just goes to show how popular it is. My favourite recipe is a killer mac ‘n’ cheese, made with a quick roux-based white sauce flavoured with a little garlic and bay, dried macaroni, fresh tomatoes, a mixture of cheddar cheese and Parmesan cheese, a little fresh thyme, Worcestershire sauce, a tiny grating of nutmeg and some breadcrumbs on top. Brought together and baked in the oven you get a “beautifully gooey” quick midweek or weekend supper.

A word on the roux: some cooks are a little nervous when it comes to making a traditional white sauce, officially known as Béchamel sauce. Don’t be – just be sure to melt your butter and mix the flour in well before adding in boiled milk, which you should ensure is quite hot when you add it to the flour and butter paste, or the roux. Keep stirring or whisking all the time to avoid any lumps. 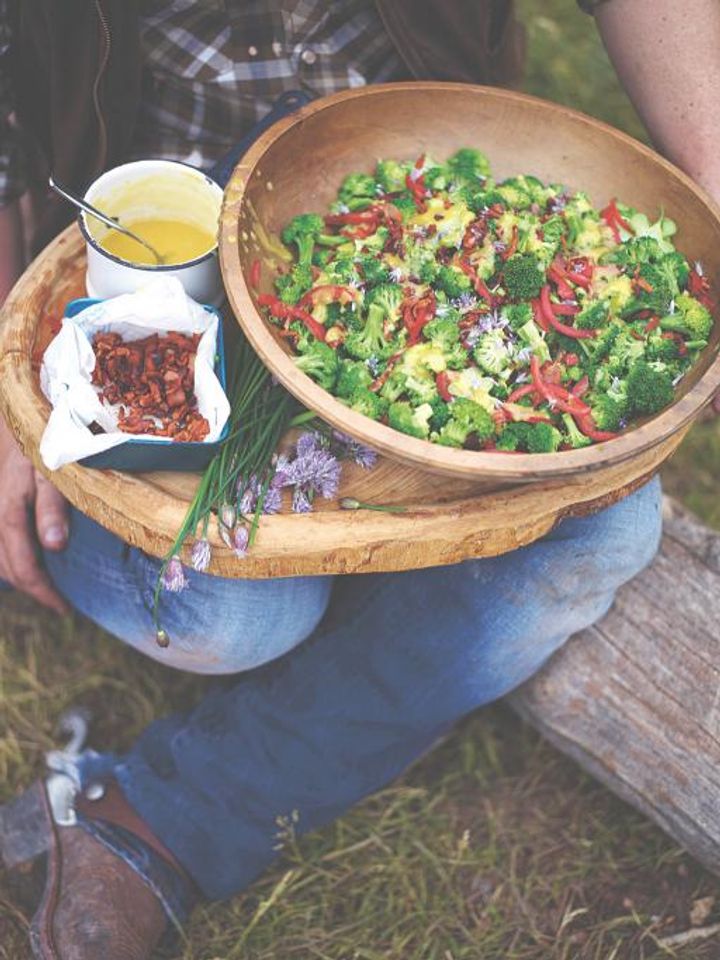 With all that cheese and tasty sauce you’re going to need to balance things out with a healthy side dish! Try a big mixed salad with plenty of extras such as cucumber, tomato, avocado, pine nuts and even a handful of blueberries or pomegranate seeds, or both. Or, why not try this American pot-luck classic, a tasty broccoli salad, packed with fresh, raw broccoli, crispy smoked streaky bacon (which will go really well with the mac ‘n’ cheese), tomatoes, chives and a simple vinaigrette dressing.

Here’s to a beautiful American (or is it French?!) supper!