We introduced our children to Mexican cuisine in the best way possible – in a tiny village north of Sayulita, where no one spoke English and menus were mainly in Spanish.

Maybe it was the much-adored paletas, quesedillas, or piping-hot, sugar-coated churros served up in a brown paper bag from a truck in the main square that convinced them this country had much to offer their tummies, but once they were on board with the food, there was no looking back. The day started with a half papaya for breakfast and finished with fresh doughnuts delivered to our beach-side bungalow. We roamed the markets, stopping for steamed tamales at one place and sliced mango with lime at another.

Perhaps my favourite memory was when my eight-year-old, Noah, and I slipped out early one morning looking for coffee and stumbled upon a corn tortilla factory in full swing. The scent of toasted corn drew us in, while morning light from an open doorway illuminated a long piece of machinery, lightly dusted with white corn flour. A petite Mexican lady was lifting an armload of masa dough the size of a beach ball into the funnel-shaped top of the machine. Below it was a conveyer belt, and the perfectly formed tortillas formed a procession downward to the tune of the clickety-clack of moving parts. Noah stood small next to sacks of whole white maize kernels heaped six-high onto wooden pallets. The señora handed him a piping hot tortilla, which he tore in half and shared with me. It was supple and meltingly tender.

A few workers glided about the room, performing their actions so smoothly it was clear that they had been doing them each morning for years. A delivery boy stood waiting for his cooler to be filled, while another señora stood behind a table with a large scales and weighed out the stacks of hot tortillas, pound by pound. I bought a stack of my own, handing over the required diez pesos (about 80 cents or half a Euro).

My son and I exited and walked back to our bungalow, hand in hand, nibbling warm tortillas. Our early morning walk had captured the very essence of why I travel with children: a chance to look through a window into the culture of another country and glean a greater appreciation for its simplicity and perfection. 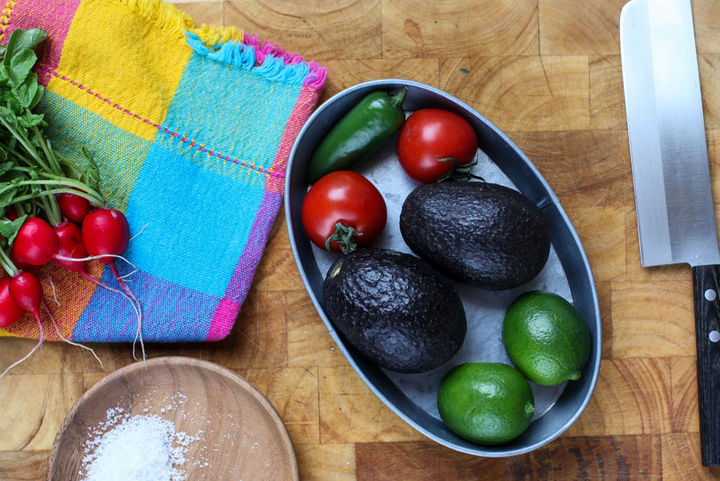 Before the trip, our boys routinely turned down avocado – abhorring the vegetable they loved as babies – but there was something about immersing ourselves in the Mexican culture for several weeks that opened their palates once again. Each day they became more adventurous, until at last they tried a guacamole we made together. It was lightly seasoned, contained no garlic or spice and used a modest amount of acid. Children’s palates are highly sensitive to bold flavours and while adults can appreciate tang and heat on the tongue, they can be put off.

The guacamole was a hit and is now the recipe my son prepares every time we revisit Mexican cuisine at home. Our tortillas may not be as fresh as when we were in Sayulita, but at least we can harvest the accompanying lettuce and radishes from our garden. Even if you can’t, try my family-friendly tacos recipe as an introduction to Mexican cuisine.

This is a mild, family friendly dish, but feel free to bring the heat at the table. Sliced jalapeño peppers, hot salsa or spicy pickled peppers are all suitable condiments to accompany these tacos.

Make the guacamole
On a large cutting board, slice avocados in half and remove the pit. Scoop out the flesh with a spoon and mound it on the cutting board. Chop the avocado with a knife until it is chunky. 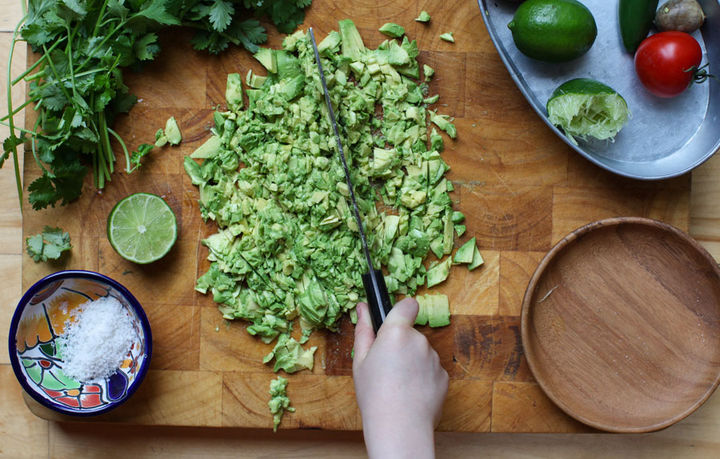 Pour the lime juice on top and sprinkle with a little salt. Mash everything together with the knife. Add the chopped coriander. Mix to combine and then transfer to a bowl. Use at once or cover with plastic wrap and keep refrigerated for up to 3 hours.

Make the tacos
Preheat a cast-iron skillet. Brush the tacos with olive oil on both sides. Cook in the frying pan, one at a time, for about 30 second per side, just to soften them and heat them through. Remove from pan and wrap in a clean tea towel to keep warm.

On the table, place the guacamole, the warm tortillas, the lettuce, shredded chicken and the radishes. Have everyone assemble their own tacos and enjoy! If people want it, serve with additional toppings such as salsa, sour cream, diced tomatoes or sliced peppers. 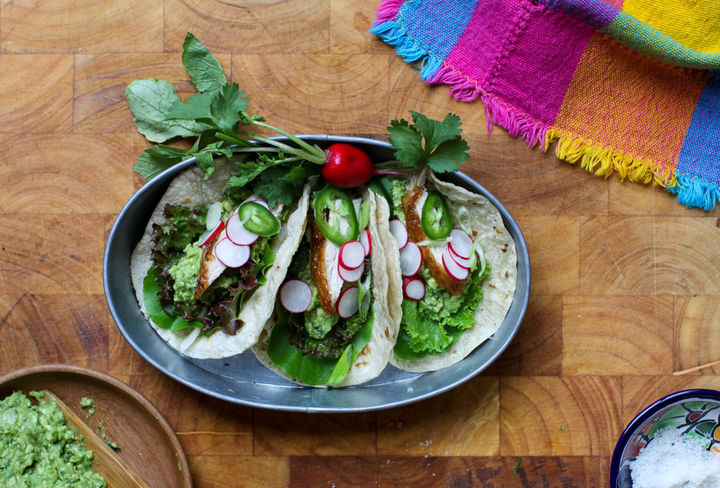 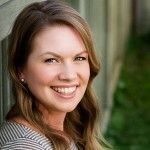