This is part one of a three-part journey into the food of Dubai, a desert city in the UAE.

Old Dubai is a misnomer. It’s barely older than I am, and from above it resembles a very dusty Swindon. On the ground though, under the shade of the buildings and down cramped alleyways, is a much more exciting reality.

It’s a short air-conditioned drive from the glitz and glamour of Dubai Marina and downtown Dubai, but the old town feels a world apart. For a start, people actually walk around – downtown most roads don’t even have pavements. You can sit outside at cafes, sniff at spice stalls and sweet shops, and wander through tight streets and jagged alleys that would never be found by the coast.

The sandy buildings reminded me of the more modern parts of Marrakesh, and those small streets are also known souks, like the famous undercover markets of Morocco. 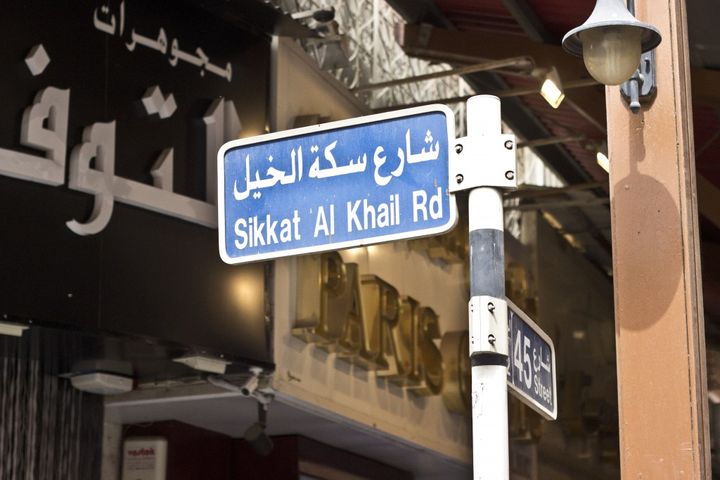 The international influences are just as pronounced in Old Dubai as in the rest of the city – and though the food comes from much closer to home, it’s still wildly varied. During our time on the outskirts of the city we saw endless forms of food, but they all had a pattern. Rice features in just about every meal, and goat and fish have special places too.

Although fish is one of the more abundant ingredients in the area, thanks to being by the sea – the Dubai fish market it a sight to be seen – a lot of the fish is cured or smoked to make it last in the searing heat. 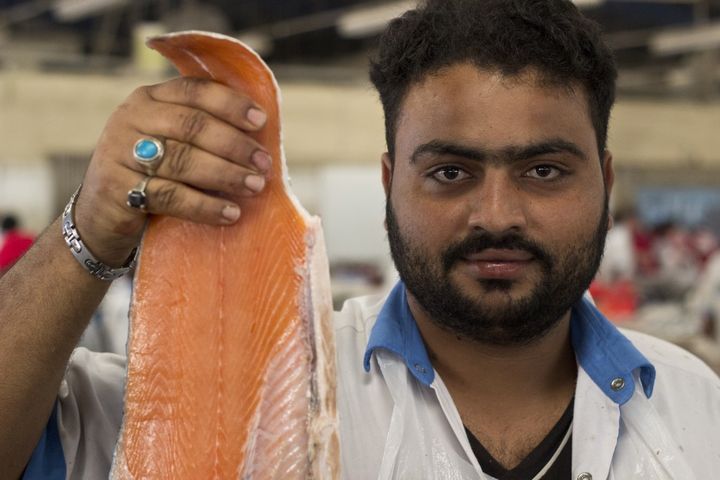 We were taken on a food tour by Arva Ahmed, who grew up in old Dubai eating all kinds of Middle Eastern food. After studying and working for years in the US, it was food that brought her home to Old Dubai, where she founded her food tour company, Frying Pan Adventures.

But Dubai is a desert. Very little grows here, – certainly not enough for the 2 million residents. Everything, even the people, has to be brought in. Different cultures, ingredients and dishes rub together through immigration and importation of ingredients – but modern fusion is not the order of the day here.

There’s a miraculous mix of cultures and flavours, but they don’t necessarily mix any more.

“The term ‘melting pot’ is overused,” says Arva. “Old Dubai is more of a mezze platter. You don’t combine baba ganoush and houmous, but they can go with lots of other things on the same plate. People here love sharing their culture and food – you only have to look hungrily at a shop’s display to be offered free food – but they don’t necessarily mix.”

But you could have fooled me. We were welcomed like old friends to most of the restaurants, although perhaps because we were with Arva, who seems to be a celebrity in the area. While the West assumes that women are oppressed in the Middle East, Arva owned every male-dominated room we walked into.

Our first stop was at Qwaider Al Nabulsi for falafel and houmous, a staple of London food markets and gentle introduction to Middle Eastern cuisine. To our relief it tasted much like it does in the UK, so we haven’t been deceived with faux-authenticity. We were also offered some kebab, but at around 6pm I thought it was a little early for that, to the bafflement the locals. So far, so good, but it wasn’t long before we found ourselves out of our depth. 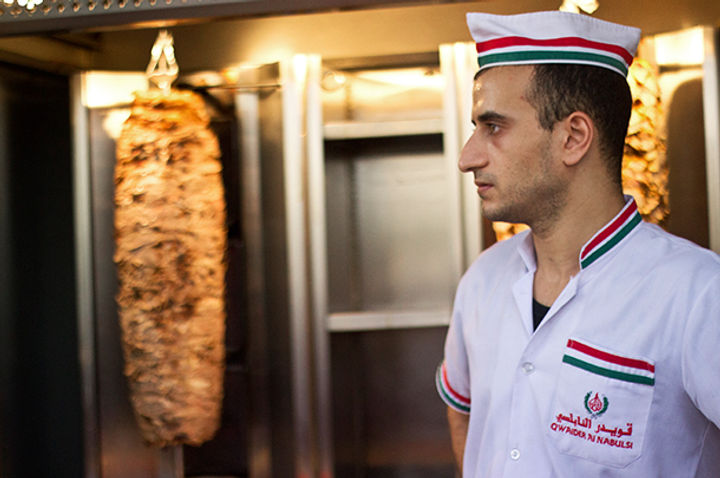 Most traditional Middle Eastern recipes came about through necessity. Fresh produce was rare before globalization brought wealth and imported goods to the area. So many of the ingredients that indigenous people cooked with were cured or dried. Our first real taster was Mansaf, a yoghurt-braised lamb dish from Jordan. It was not just any yoghurt, however; this was Jameed or “rock cheese”, which is dehydrated into chalky balls for longer storage and easy transportation in the desert. The lamb and yoghurt is spiced and served with rice on top of a flatbread that soaks up all the sauce to make a really moreish, semi-crisp base. I’ve never seen a dish that looked so much like the faded photos of a cheap takeaway window while being so heady and aromatic. 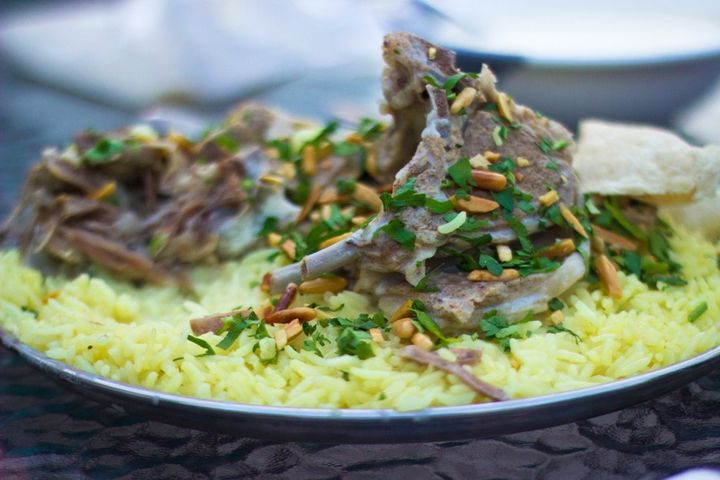 The revelations didn’t stop there. Next up was Kunafa – a bizarre but beautiful Palestinian dessert of squeaky cheese coated in noodles, which is then fried and drowned in sugar syrup. It’s cooked on griddle pans the size of tractor wheels and found in pretty much every café we looked into. No wonder – the stringy cheese and crispy noodles come together with the sweet and salty flavours to make something hellishly moreish. Often it’s topped with smashed pistachios, which is a sign of generosity in the Middle East, but I just think it adds a bit of welcome savouriness. It takes a few mouthfuls to understand what’s going on, but once you’re used to the idea it’s hard to stop. 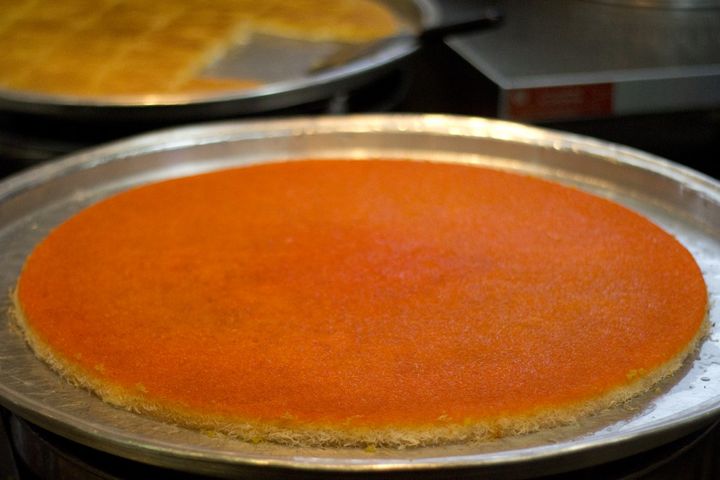 Old Dubai’s cafés betray a severe sweet tooth, and the coffee shops are more noticeable for their arrays of edible treats than their heady smells of coffee.

The Middle East is home to some of the most varied baklava I have ever seen. As one of the most tangible remnants of the Ottoman Empire (except maybe furniture), the baklava in shops stretches out as far as the eye can see – enough sweet filo pastry and nuts to make the entire empire suffer a sugar crash. Luckily the shop we visited served it all with some potently spiced Arabic coffee to keep us awake. 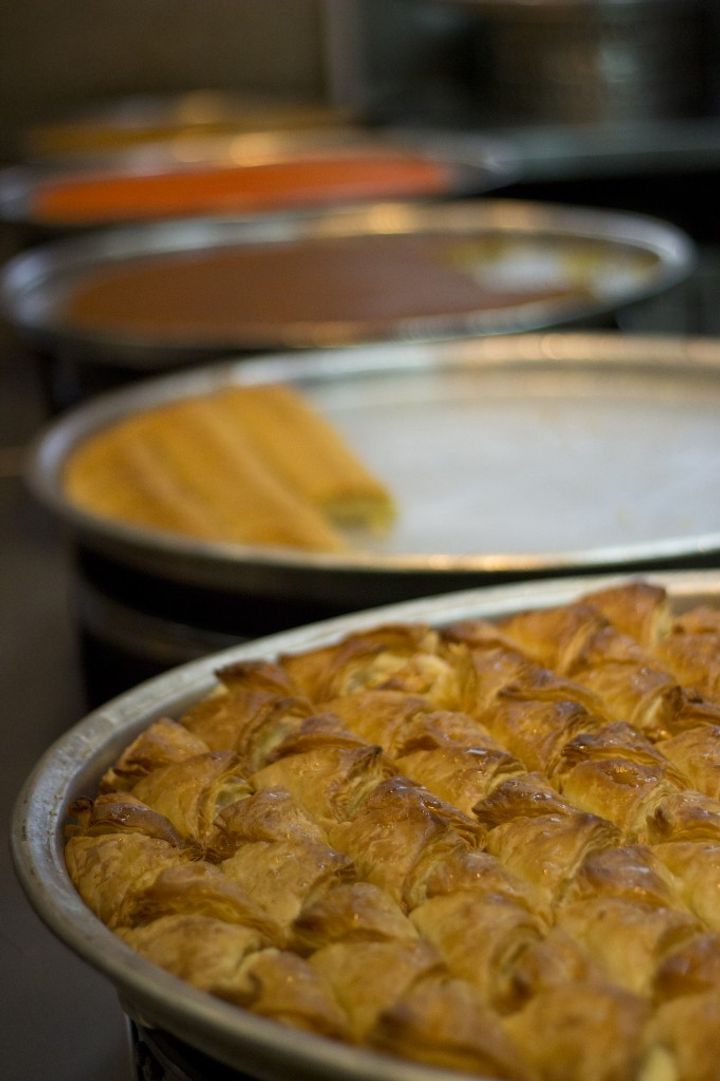 Food before the oil

It may have been getting late, but we were only on afternoon tea. After a whirlwind visit to a Turkish pizza place, where they served us the kind of topping-heavy deep-pan pizzas that would make a man from Napoli weep into his dough, dinner was the next call.

It was our biggest departure from the cliché of Dubai yet. That departure meant Emirati food, which should really have taken pride of place. Tellingly, Arva refers to it as “the food before the oil”.

Like the Jordanians at our first restaurant, Emirati hosts are famously generous, despite the fact that they have historically struggled for food. They rarely ate meat because animals were scarce and more useful for milk. For centuries their staple diet has been fish, rice, yoghurt, dates and water from wells. On that evidence, and the food served in our next restaurant, Al Tawasol, that doesn’t seem so bad.

Al Tawasol is a strange place. All bright lights and kebab house-style signs outside, but quiet and restrained inside. There is a men’s section and a mixed section where we sat down – and by sat down I mean on the floor, as is tradition., After removing our shoes, we sat around the side of the room on cushions to eat. It was exceptionally comfortable, save for the crawl on all fours to reach the food in the middle of the room. The food too was comfortable – all heady curries and plate-loads of rice, eaten with your right hand of course (the left is for the loo) and all from the same plate as your fellow diners. Some of the group resorted to spoons, but having been brought up grabbing antipasti from boards (thanks Jamie), I felt right at home. We tucked in to two curries: a Laham Salona, super spicy curry served with an even more spicy salsa and, thankfully, a cooling yoghurt lassi; then Machboos, a heavily spiced chicken curry similar to a Biryani, where the rice is simmered with the meat to coat it in meaty stock flavours. 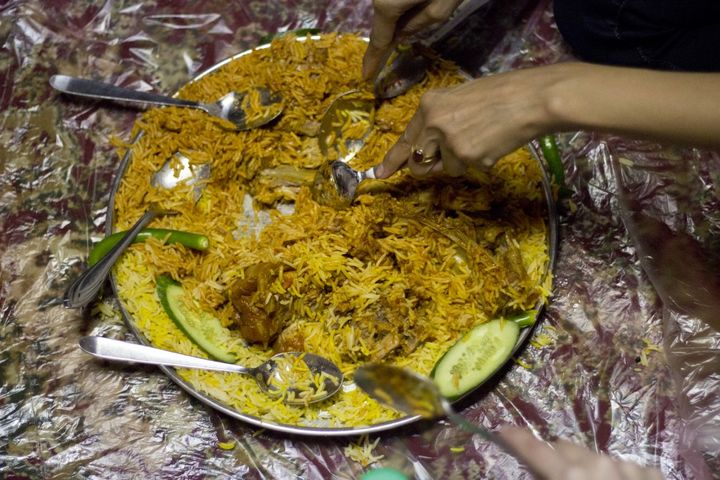 Emirati and heady Persian cuisine have a lot in common because they have spent much of their history fighting each other, culminating in the Muslim invasion of Persia around 642AD. The main result of this, as far as food was concerned, was a mutual love of rice. They use it as much more of a carrier of flavour than a sometimes-bland side, as we tend to do. Arva talks wistfully of the amazing Persian methods of cooking rice, and their secret varieties that never cross the ocean to Dubai. Sadly we didn’t get any, but I was finding eating rice with my hands surprisingly challenging anyway.

Food in Old Dubai is a very tactile experience. New Dubai is built to be looked at, but Old Dubai is meant to be felt. While the downtown is influenced by people and places all around the world, Old Dubai reaches back in time, and only as far as it can reach – whether that’s literally across a carpet for some curry, or by boat as far as Turkey for some baklava. The sights of New Dubai are undoubtedly wondrous, but it’s the smells, sounds and tastes of Old Dubai that haul you in.