I wasn’t even a tiny bit interested in the World Cup when it kicked off. I couldn’t have given two hoots (or foots) and certainly wouldn’t have worked my summer schedule around any football games.

But, just like this month on jamieoliver.com, I’ve found my way in. It all changed when I learnt that a clever friend of mine was alleviating the pain of watching her boyfriend gurning at the TV during every match by expanding her culinary repertoire.

For every match that he wants to watch, she’ll teach herself a new recipe – one that relates to one of the nations they’re watching on the telly box that night. Genius!

Mostly it’s been simple and tasty enough: she’s cooked up some fajitas already in support of Spain, and tried out a recipe for piri piri chicken to show her love for Portugal… but I heard she was a bit concerned about Nigeria vs. Bosnia Herzegovina! Luckily all she had to do for inspiration was go to jamieoliver.com/foodieworldcup.

Now that I’ve got a reason to get excited about the World Cup, I’ve given a lot of thought to which team I’d support. Middle Eastern cuisine got me all excited earlier in the competition, but my true foodie allegiances lie slightly further west.

Admittedly, I’m Scottish – no comments about our football team please – but live in England, so ridiculously and totally unreasonably I didn’t support England in the World Cup (at least it’s saved a broken heart). However, my sister and her family has lived in south-west France for around 15 years and it’s a beautiful area, full of salt and hot water springs. Therefore, I’ve had a slight allegiance with France in sporting events for some time.

So, with the French team in mind, here is my recipe for Madeleines; tiny, quintessentially French cakes which are light and airy and dipped in lovely rich dark chocolate. I’ve incorporated lavender into the batter, as it’s believed to have a slight calming effect and might temper any overexcitement that flares up during the games! 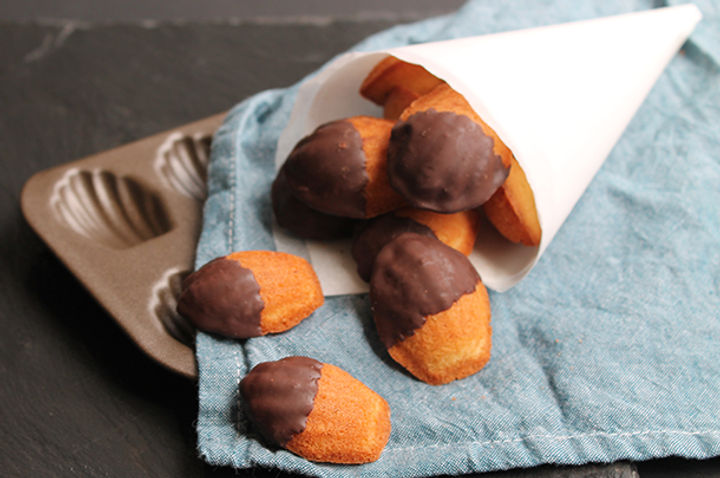 Preheat your oven to 170ºC/340ºF/gas 4 and butter your madeleine mould using a pastry brush or your fingertips coated in a little of the melted butter from the recipe. Sprinkle some plain flour onto the buttered tin and shake off the excess – this will stop the mixture sticking to the delicate shell pattern in the tin.

In a large bowl, mix the melted butter, egg yolks, honey and lavender together first, then add in the dry ingredients and mix with a wooden spoon or spatula until just combined.

Using a hand whisk or a stand mixer, whisk the egg whites thoroughly in a separate bowl until they stand up nice and tall in peaks. We’re looking for stiff peaks here, not soft ones, so we are incorporating as much air as possible to keep the cakes light and soft as they’re baking.

Once the egg whites are ready, fold them into the first mixture. This is probably easiest using a spatula, in two or three separate goes – again, use the lightest touch possible and mix for as little time as possible – until just combined – to keep as much air in in the mix as possible.

Using two teaspoons to scoop up and cleanly push the mixture, fill each little mould in your tin, filling right up to the rim of each shell shape. Once full, tap the tray lightly on your work surface to make sure that the mixture fills each of the little ridges of the shell shape fully.

Bake for around 8-10 minutes, or until just turning golden brown at the edges. Remove from the oven and leave to cool. Meanwhile, half-fill a pan with water and bring it to a simmer over a medium heat. Place a glass bowl on top and add the chocolate, then leave to melt, stirring occasionally.

Once cool, you can dip the Madeleines into the melted chocolate. To get a pretty shape, hold what would be the bottom of the shell shape and dip half of each madeleine into the chocolate – its easiest if you top the chocolate into a narrow cup so you get enough depth of chocolate to fully dip. Hold the madeleine straight and allow the excess to drip off – ensure that you place the cakes with the shell indentation side up to set, on a cooling rack or clean work surface.

Once the chocolate has set, enjoy with a nice floral cup of earl grey tea to accentuate the lavender.