Those of you who live in the glorious green of the countryside may have begun to notice the sound of distant guns and barking dogs on the wind. As the cool air begins to creep around us once again, we know it is time for our tables to be adorned with delicious birds, hunks of venison and hearty stews. ’Tis the season for game, and with it comes a responsibility to eat and enjoy it.

I come from a family that has fairly deep roots in shooting. On most weekends during the season I used to proudly open the door to my wind-blown father, fresh from the woods, field or somewhere or other, dressed to the nines in his shooting regalia with feathers caught in his beard, his gun slung over one shoulder and a brace of pheasants over the other (and often a rabbit or two dangling from his back pocket).

You might think it odd, but as a child I grew accustomed to the growing number of pheasants, grouse, partridges and rabbits – swinging by their necks on the larder door handle. They were like old friends and I still remember them fondly. However, when it came to the pluck I was, frankly, a wimp and used to hold my nose as my elder sister and mother tore the feathers from their skin and prepared them for cooking. Our freezer was always full of birds and rabbits.

I remember those days warmly – they were a tradition – and you know us humans are suckers for tradition. It didn’t bother me then that these beautiful creatures were killed for pleasure because we ate every morsel of animal that my father killed: stews that warmed my toes on a clear winter’s day, pheasant curries on Friday nights and rabbit pies that gave my cheeks a pink happy glow.

As I have grown up, however, I have also seen another side of game – the side that caters for the wealthy city slickers and their enjoyment of blood sport.  In many cases these expensive days on the farm are used as entertainment only; an opportunity to brandish a gun and shoot at a bird or 10. Which is fine, if they are killing to eat – to take home their rewards as a thank you to the animals that gave their lives. Often, however, they do not. They leave with perhaps one bird and leave the rest of their killings behind. Sometimes 150 birds are killed on a day’s hunt – many are shared between the gamekeepers and the locals who help on the day and some are apparently exported, but many are not used at all. I can’t understand this attitude towards game, although the name doesn’t help I have to say.

In comparison to the meat-producing industry, hunting for food is the least cruel method, if the shooting is competent. It’s refreshing to know exactly where your food has come from and know that it has probably had a significantly better life than the battery chicken you had on Sunday or the Danish pork you had on Monday. Game is hugely varied and the flavours differ immensely, from subtle through to the very strong. If you are not keen on the wild flavour that game is famous for, try the tender and sweet rabbit in Jamie’s 12-hour Bolognese.

Pheasant has a surprisingly delicate flavour too and works wonders underneath a blanket of golden, buttery pastry or in a gently simmered stew. Venison has a unique and delicious flavour and cooks in a similar way to beef. The tender parts need flashing in a hot pan with a lick of oil and a knob of butter, and should be served with a rich gravy and wintery veg. The tougher parts of the animal need slow and low cooking with rich sweet flavours like juniper and rosemary. Have a look on the website for plenty of venison recipes – my favourite is this roast venison. 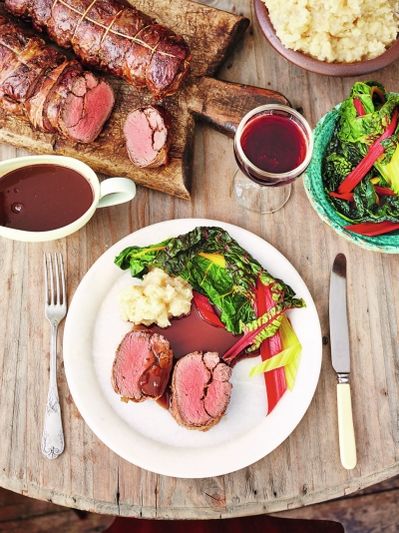 Game is versatile and delicious, and comes from the very best of our wild animals, so it should be tried and glorified, not scorned and turned away. If you do happen to go shooting or stalking this winter, be sure to equip yourself with recipes, make some space in your freezer and appreciate that what you are killing is a living thing; an important part of the eco-system that links us all, not just “game”.

So have a look at the delicious recipes we have for game and next time you have the opportunity please use them!