While crusty French sticks and airy Italian loaves still tend to attract the most attention, Germany is a worthy rival for Europe’s bread champions. They have around 300 varieties of dark and white breads, and lay claim to a whopping 1,200 varieties of rolls and mini-breads too – an achievement worth toasting to, we’d say.

As anyone who’s ever hungrily encountered a hotel buffet will know, bread venerated at the German breakfast table as it is nowhere else. The most important element of the most important meal of the German day, bread provides a vehicle for sausage, cheese, boiled egg, cold meat, fish, jam, honey and other delights, but it’s also a star in its own right. In the rainbow of German offerings there are seeded varieties, wholegrain breads, sweet mini loaves and pretzel rolls alongside more conventional wheat bread and, of course, rye.

A hardy grain that’s closely related to barley and wheat, rye has been grown for over 4,000 years and has been popular across central and eastern Europe since the Middle Ages. Naturally lower in gluten than wheat flour, rye is often lauded for health benefits, including lots of vitamins and minerals, high levels of soluble fibre and evidence that it makes you feel fuller for longer. On top of all that, it’s delicious.

Dense, dark pumpernickel is one of the most traditional forms of German rye bread (as well as being really fun to say), and is typically wheat-free, but does contain gluten. Our 100% rye pumpernickel uses a natural rye sourdough starter and also features roast potato shavings and cane molasses for a slightly sweet, moist loaf that can last for over a week. 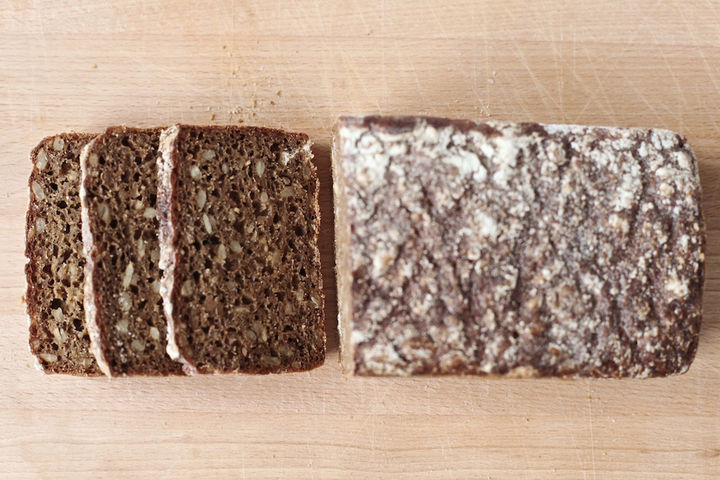 Germany’s Scandinavian neighbours are also big fans of dark rye, using thin slices as the foundation of their extravagant smørbrød – open sandwiches topped with smoked fish, seafood, caviar, eggs or pâté. And the famous “black bread” eaten by Heidi in Johanna Spyri’s Swiss children’s novel of the same name would have been rye – although it’s fair to say she appreciated it less than we do now.

Rye is often combined with other lighter flours in mixed loaves too, for a subtler flavour and less-dense texture that still has the grain’s distinctive character. Caraway seeds, pumpkin seeds, oats, barley and cornmeal have all been used to create light rye bread and, in America, wheat-rye mixed loaves are famed in Jewish delicatessens, loaded with salt beef, cheese or pastrami. Put yours to work in a serious mouthful like Jamie’s Reuben-ish sandwich.

If you fancy baking your own, this black bread recipe from Jamie Magazine features coffee, molasses and even dark chocolate for a beautifully rich and fragrant mixed rye loaf. Pop it on the table for breakfast and you might still be tucking in come lunchtime.

The Flour Station grew out of the basement of Jamie Oliver's Fifteen Restaurant. We soon ran out of space and branched out to our own bakery premises. Not long after that, we set up our first stall at Borough Market and since then we've been baking our delicious sourdough breads for top notch cafes, delis and restaurants across London as well as our weekly market stalls.