It’s our goal to get people into the kitchen and get them cooking simple, delicious food. It’s a perfect time to start at any stage of life, but the earlier you get the bug, the more you’ll be able to enjoy it! Getting kids to try new things isn’t always easy either, and having them cook the food they’re eating can really help them to become more adventurous!

Vegetables are often a real sticking point but it’s not hard to disguise them and still give a kid all the benefits. We’re still giving them plenty of the stuff they love…pasta, tomato sauce and cheese, but along with a couple of secret veggies as well! Have them help you prepare it, so that they get familiar with different ingredients and associate them with something that they enjoy!

Of course we don’t just expect you to take our word for it…we’ve had our recipes go through rigorous testing with actual kids! We’ve invited Barry’s cousin Ollie down to the studio a few times now and he’s not afraid of getting involved and letting us know exactly what he thinks! The fish fingers went down a treat, even with that extra secret pepper puree!

While it’s really important to try and give kids a healthy diet, it’s good to remember that just getting them into the kitchen and involved with food is going to set them up for life! In general, if you’re cooking good, fresh food then it will always be healthier than your average pre-prepared meal. Remember to be extra careful when seasoning your food when cooking with kids as they can’t have as much salt as adults! What we’re trying to say is that sometimes it’s good to cook up a proper treat that’s going to get them interested! It’s the same for anyone who’s new to cooking. That’s what our fridgecam videos are for, we cook up something crazy to get people into the kitchen and enjoying food. As they get a bit older, try mixing things up and experimenting with new stuff! If you’re brave enough, give our chocolate spaghetti meatballs a go as a special treat!

However you get kids involved in the kitchen, remember alongside healthy eating and trying new things, it’s also about having loads of fun along the way! 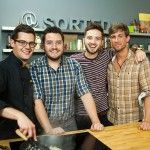