Here in the UK, our appetite for gluten-free food is bigger than ever. According to a recent study by the University of Nottingham, the number of diagnosed cases of coeliac disease has increased four-fold over the past ten years. The knock-on effect of this heightened awareness of gluten is an industry that’s now worth over £174 million. Does this mean gluten-free treats can finally match up to their flaky, buttery baked counterparts?

Jane Hornby, who created the beautiful gluten-free baking feature for the latest issue of Jamie magazine, thinks so. “Since I started working as a food writer, gluten free baking has done a total 360. More people want to cook without wheat on a daily basis, whether they can tolerate it or not”.

Gluten is a protein found in wheat, barley and oats that acts as a glue and gives the characteristic stretch to breads and pasta. However, gluten causes problems for many people, but ingredients such as xanthan gum are a great way to replicate this distinctive texture (like in Jamie’s recipe for gluten-free pasta). These days, ingredients like this can be found in larger supermarkets. 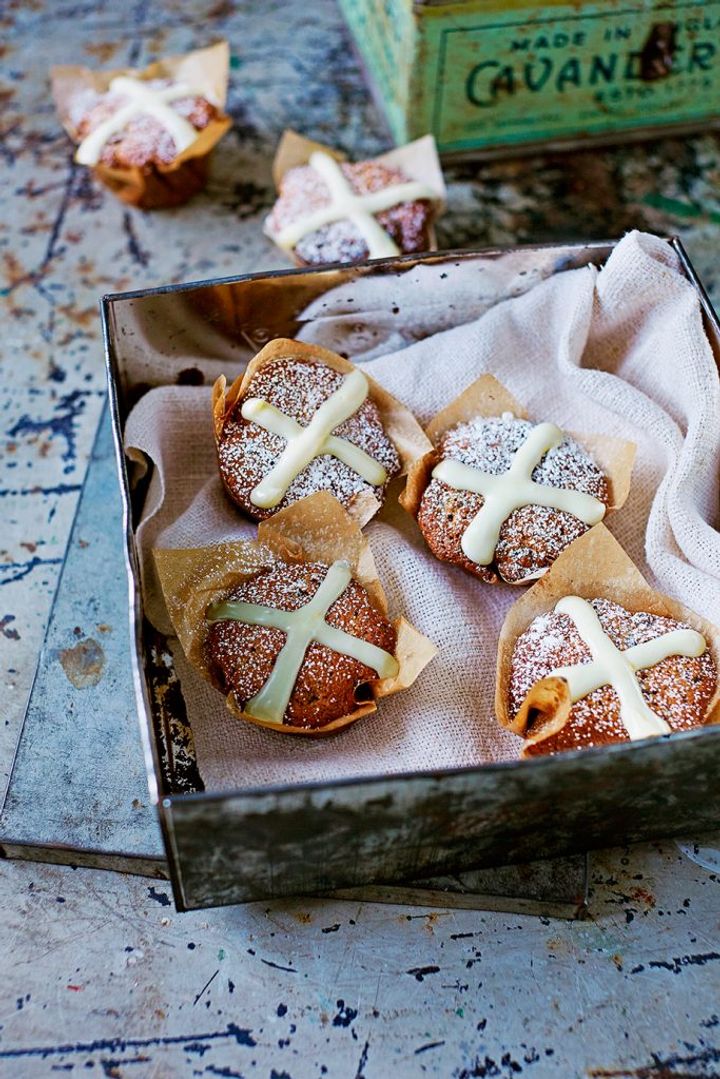 Natural alternatives can also work well – Jane’s hot cross muffins in this month’s Jamie magazine are made with a mixture of ground almonds and buckwheat flour (which, despite its name, doesn’t contain gluten, and is available in health food shops). The resulting creation is fluffy, moist and decidedly cakey – anyone would be hard-pushed to resist these with a cuppa.

Access to newer ingredients and better recipes means the gluten-free food scene is positively thriving – arguably, it’s become almost trendy to go without wheat. Emma Goss-Custard, founder of the Honeybuns bakery and café in Dorset, which has grown immensely since its humble beginnings in 1998, agrees. “Whereas gluten-free used to be the poor relative of ‘normal’ food, now it’s vibrant and innovative. New ingredients online and inspirational “free-from” blogs have driven the quality up and brought some much needed fun to the gluten-free baking world.”

The trend is making waves in the restaurant scene, too. Amelia Fonti is the founder of Senza in Chicago, the only gluten-free restaurant in the world to have held two Michelin stars. The restaurant has now been rebranded as Wheat’s End Café, serving artisanal breads, pastries and pasta, which are all prepared under strict coeliac-friendly conditions.

She says that, “Most of our customers are coeliac sufferers, but we also have those who just feel better after eating less wheat. Surprisingly, though, we have lots of customers who just love our food, and don’t really care whether it’s gluten-free!”

Whether it’s experimenting with different flours such as chickpea or chestnut, using more scientific ingredients and techniques, or just taking advantage of the brilliant cafés and restaurants with wheat-free offerings, going without gluten has never been so easy. This is good news not only for the rising number of people being diagnosed with the condition, but also for anyone who is interested in what goes into their food and how it makes them feel. A wider knowledge of unusual ingredients and a better understanding of our food can only be a good thing. So now all of us can have our cakes and eat them too.