Rhubarb is a vegetable, and unusual among vegetables in that it is treated like a fruit. The stems are very tart, and need sweetening before they will be palatable.

Several species of Rheum filtered through to Europe in the Middle Ages from China, where the root had been used medicinally for centuries as a purgative. One – R. rhabarbarum – was found to have edible stems, but its culinary use only really took off in the eighteenth century when new overseas colonies made sugar more readily available. The Victorians became very fond of the plant, inventing both the rhubarb crumble and fool, as well as discovering its affinity with vanilla.

How to use rhubarb

Vanilla remains the classic accompaniment, usually in the form of custard, ice cream or yoghurt, but there are others that work well too – such as ginger and cinnamon, which work beautifully in the classic crumble. However, a look at some of these rhubarb recipes and our feature on using forced rhubarb will illustrate that rhubarb is more versatile than it is often thought to be. 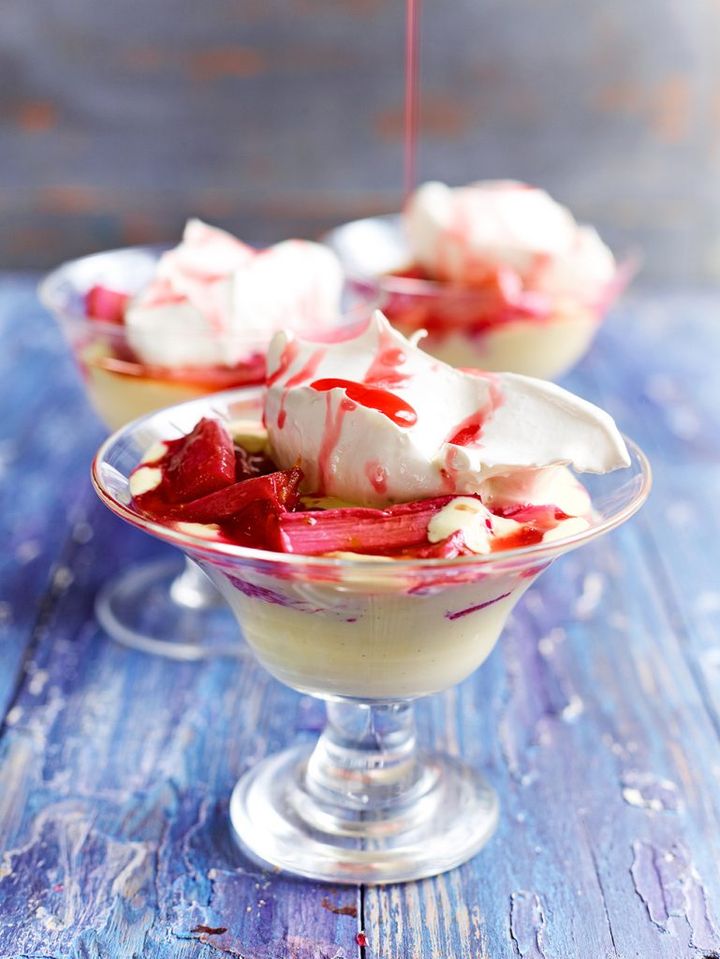 Most interesting to my mind is the pairing with pork belly, using rhubarb’s acidity to balance the fattiness of the meat. It is similarly paired with lamb in Iran and North Africa, and also makes a good foil for mackerel and other oily fish. Upon consulting Niki Segnit’s Flavour Thesaurus, I discovered other intriguing companions for rhubarb: juniper, saffron, anise, strawberry, orange and mango. 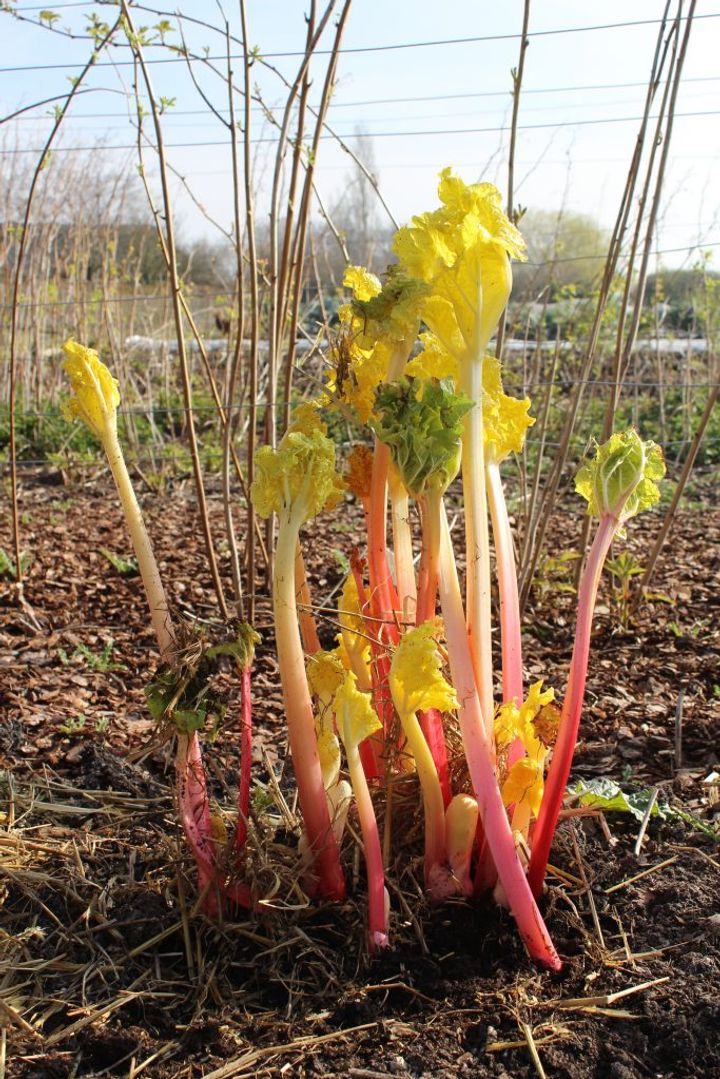 It isn’t hard to grow your own rhubarb. It deserves a place on anyone’s plot: in return for minimal attention and skill it will stay happy and cropping for a decade or so, and provide the first ‘fruit’ of the year by some weeks. 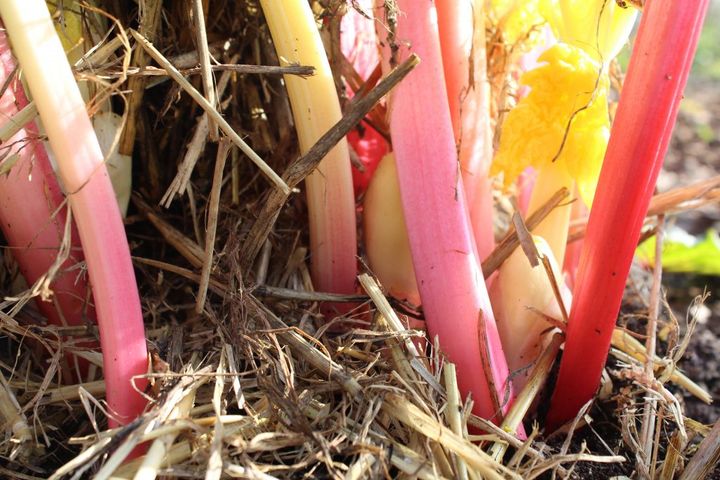 The plant is tough and unfussy, but performs best in rich, well-drained soil in a sunny, sheltered spot. A young container-grown plant can be bought and planted at any time of year. Refrain from picking in the first year and harvest only lightly in the second to allow the plant to establish properly. After that, stalks can be harvested from April. Grasp them at the base and pull with a little twist, rather than severing them with a knife. Always leave half a dozen: completely stripping a plant weakens it. Stop picking in early July to allow the plant to recover and reward it with a liquid feed. Follow this with a heavy dressing of manure or compost each winter. 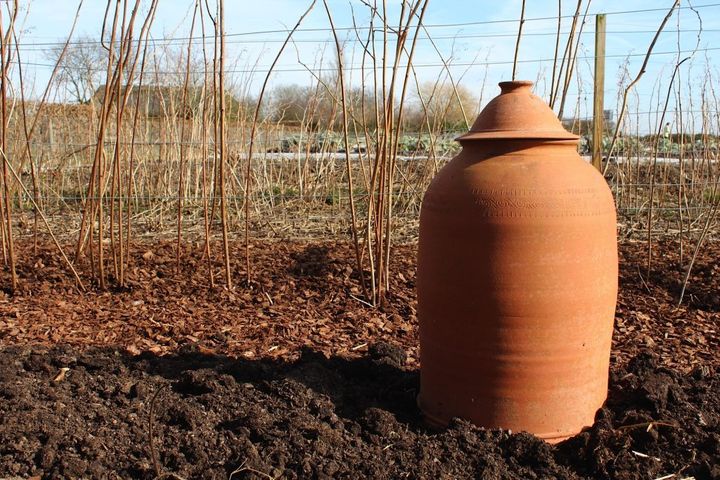 On no account eat the leaves, which are poisonous due to the high concentration of oxalic acid. Some is still present in the stalks, which is why your teeth feel oddly furry when you eat them.

An earlier crop can be obtained by deliberately excluding light and increasing the temperature in late winter, a process known as forcing. Darkness and protection from the elements produce blanched growth that is also sweeter and more tender. These pale pink stems are the first to hit the shelves each year and the most expensive. 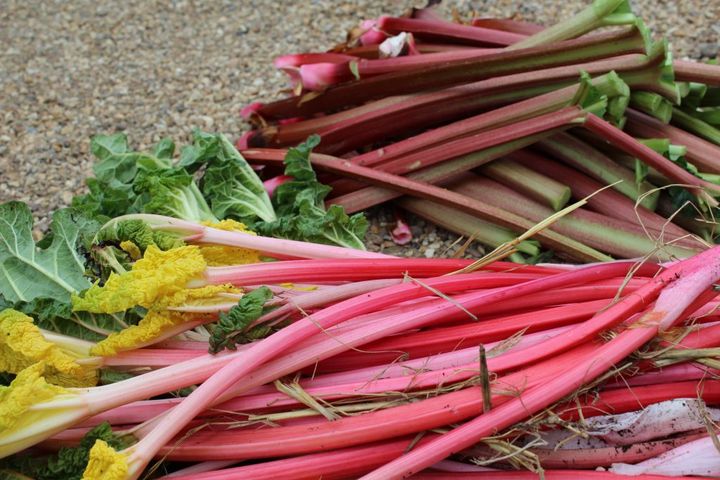 To force your own, simply cover a mature rhubarb crown with a thick layer of straw for insulation in January or February, and then place a big bucket or bin over the top (only force one year in three to avoid exhausting the plant). The moment when the bin is removed to reveal its gleaming contents is always rather magical.

As a treat, I can recommend dipping them in sugar and eating them raw.

If you want to know even more about the wonderful world of rhubarb, check out the Vegepedia.

Desserts, Fruit, How to, Seasonal produce