In the spirit of celebrating all things Brazilian, we’ve asked native Rosana McPhee to share her recipe for arroz doce – rice pudding Brazil-style!


Arroz doce, also known as rice pudding, originated in Asia thousands of years ago and is a firm-favourite sweet treat in many cultures around the world. Early sweet rice recipes made their way to Europe around the thirteenth century, and reached Brazilian soil via Portugal in the sixteenth century, where both countries adapted the dish to include cinnamon.

A DESSERT WORTH CELEBRATING

In Brazil, arroz doce is very well known. It has become one of the traditional dishes of the June festival Festa Junina, which celebrates the Catholic saints John, Peter and Anthony, as well as marking the end of summer and the beginning of the harvest months.

This aromatic and velvety recipe has evolved over the years. Some versions call for cream or condensed milk instead of regular milk, which gives it a different consistency.

Here’s my very own homemade version, passed down to me from my grandmother. Try serving up with chocolate syrup, freshly grated coconut, roasted peanuts, a dash of rum, orange or rose water and guava paste. The possibilities are endless!

HOW TO MAKE ARROZ DOCE

For more Brazilian food inspiration, take a look at what some of the country’s top Instagrammers have been snapping and sharing. 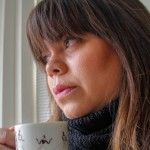 Rosana McPhee is an award-winning Brazilian food and travel blogger, living in London. She documents her adventures on her blog www.hotandchilli.com, featuring beautiful recipes that tell the stories of Brazilian food and beyond.