With its striking red sponge, I must admit, I was initially cynical of red velvet cake and imagined it to be style over substance – I hadn’t eaten anything that vibrant since I was a kid.

But while on a pilgrimage to Magnolia Bakery in New York (many, many moons ago), I knew I would be a fool to not give it a go, and, when I tried it, it truly blew me away. It tasted nothing like I expected – it was, in fact, a deliciously smooth chocolate sponge with a creamy and ever-so-slightly tart cream cheese frosting – for me, a perfectly-balanced combo.

So my love affair with red velvet cake started, and ever since then I’ve been hooked. Apparently, I’m not the only one. Since its relatively recent arrival in the UK (compared to the States, that is), it has become a firm household favourite, despite being thought to be almost 200 years old.

WHY IS RED VELVET CAKE RED?

Originally a classic southern-American recipe, its name sparks much debate. Some say the “red” refers to the sugar that was originally used (brown sugar was traditionally referred to as red sugar), while mostly it is thought to refer to the red colour of the sponge and its velvety texture. Traditionally, the red hue came from the reaction between the cocoa powder and the acidic vinegar and buttermilk. Cocoa naturally contains anthocyanins, a compound found in red foods (such as red cabbage), which gives it a strong pigment. However, nowadays, our cocoa is processed differently and is treated with an alkalinising agent that neutralises the acid, making the colour less vibrant. So even if you follow your great-great-grandma’s recipe, you’ll almost certainly still end up with a less vibrant sponge.

GET THE PERFECT SPONGE

Thankfully, however, the combination of bicarbonate of soda with the vinegar and buttermilk still give red velvet cake its smooth, iconic consistency. Even though the recipe may sound a little fiddly, alternating the wet and dry ingredients is what gives it that gorgeous creamy feel.

Red velvet is a wonderful chocolate cake alternative, something a little different and is perfect for any celebration. And unlike a lot of chocolate sponge recipes, which have a tendency to dry out quite quickly, I can safely say that this stays moist and still tastes fresh a few days later, making it a perfect cake to make in advance. 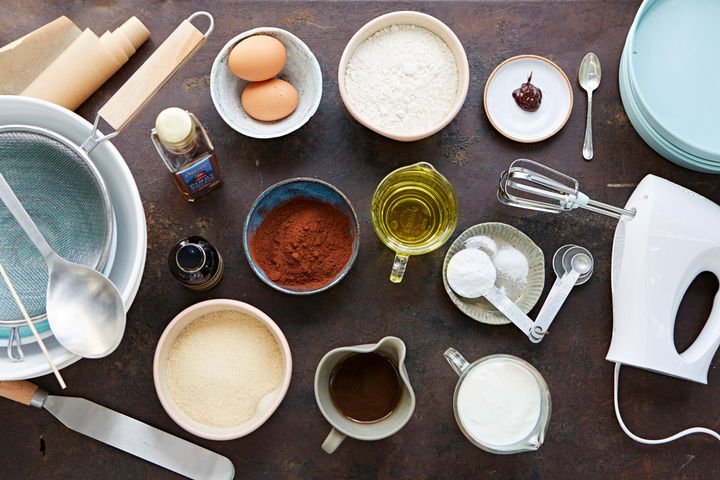 Tip: If you want to make this cake even further in advance, wrap the individual, cooled sponges thoroughly in a couple of layers of clingfilm. Then wrap them well in foil and pop them in the freezer – they’ll last this way for a few weeks. Defrost completely before decorating.

Once you’ve perfected your red velvet why not impress your friends with this Red velvet cheesecake from Donal and Lanlard Skehan:

For more bakes that embrace the wonderful ingredient cocoa, check out our chocolate cake gallery.

Baking, Cake, How to