Words and recipe by Christina McKenzie

More than any specific recipe, most of my memories of cooking when I was little are just getting involved in the kitchen with my grandma and mum.

We used to live next door to my grandparents and our gardens joined, so my sister and I would run over after school and hang out with them. My grandma, who we called Nanny, would often have made a lovely soup for supper using the chicken carcass from our Sunday dinner. She always used to make the best soup; it would be so simple but filled with loads of tasty bits and bobs – leftover veg, fresh herbs, shredded chicken. It’s such a homely and tasty dish.

I developed my love of cooking from moments like those, and now there’s nothing I love more than trying to do the same for kids. Cooking with little ones can be such fun, and it’s really simple to get them involved in the kitchen – you’ll always make a lot of mess but it is worth it! I recently baked with my niece for the first time – she’s only two – and she loved it. We made a banana cake and she had a great time mashing the banana in her hands and mixing it all together. Cooking with your kids – or nieces and nephews – is a very special thing, and teaching them from an early age gives them a great start in life.

Food Revolution Day 2014 was focused on getting kids in the kitchen, and there are loads of resources on the website, from recipes to top tips, to make giving them a taste of real cooking much easier. Make sure you follow our special Kitchen Garden Project blog too, as it’s bursting with even more tips from our experts.

Even if it is the simplest of things – a beautiful rainbow salad wrap, a minty yoghurt dip or banana bread – kids should know about food, and it all starts at home. Try using this wonderful soup as a great way of not just getting kids involved in the kitchen but also to appreciate the joy of using up leftovers. If you need ideas for the initial meal, try this failsafe and fantastic roast chicken recipe. 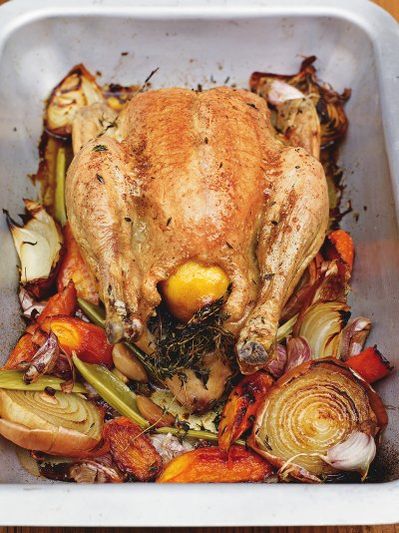 This soup is something similar to what my nanny would have made. It’s all about using up leftover veg and meat, so if you have anything else that needs using, throw it in! You can either have it unblitzed as more of a traditional broth, or blitz it to make a lovely thick soup – its up to you!

Place a large saucepan on a medium heat and add the oil. Throw in the garlic, thyme, carrots, celery and leeks, then cook for 5-10 minutes, or until softened.

Next, add the potatoes and stock, then cook for a further 20-30 minutes, or until potatoes are cooked through and soup has reduced a little. Stir through the chicken 5 minutes before serving and season with salt and pepper, to taste. Serve up with a good wedge of fresh bread, spread with butter. 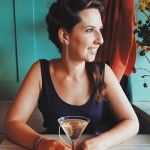 Christina is a stylist in Jamie’s food team. She loves a good crumble, which she only makes in double batches, and is the go-to girl in the team for gluten and dairy-free recipes. As a stylist she’s obsessed with charity shops, and spends her weekends finding cute cafes and restaurants in Hackney, East London. Follow her on Instagram at @christinamackenzie.