I’m writing this on 29 February, that strange extra day that’s shoehorned into every fourth year to make the calendar year and the earth’s celestial year align with one another.

Tomorrow, it will be March, and although it still looks wintry out there, there are more signs that spring is coming.

The sap is rising; literally in the case of trees (don’t prune birches now, the wounds will weep for days) and figuratively in animals – hares are a common sight in the fields each morning on my drive to work. If I’m lucky, I’ll get to see them box at some point, living up to their Mad March reputation.

Unless it stays unusually cold, the world will look noticeably different in three or four weeks’ time. As ever, March is my last month of working normal hours till August, so my excitement is always a little tempered by thoughts along the lines of “oh no, here we go again…”, but I wouldn’t swap it for anything.

In the vegetable garden, March is another lean month, with nothing really substantial to keep body and soul together. This “vegetable gap”, as it is termed by gardeners, was once called the “hungry gap”. It’s not a problem nowadays, since we have tins, freezers, airfreight and supermarkets, but go back only a couple of centuries and it can’t have been very pleasant for a lot of people. Stored produce is now running low and many of the overwintered crops such as parsnips and leeks have almost gone, too. 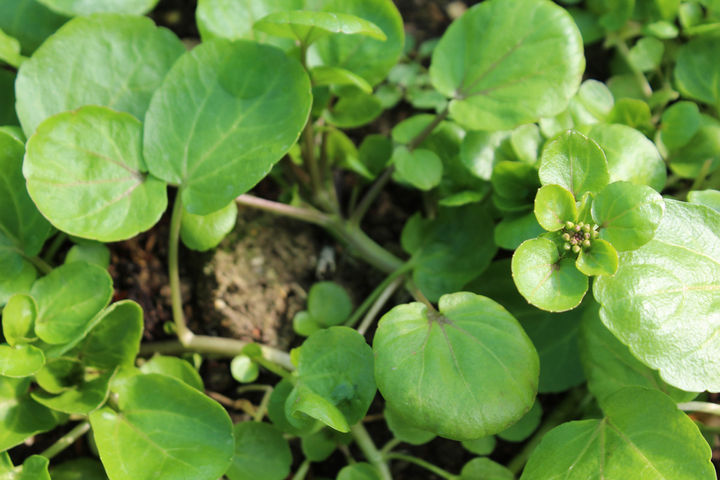 Fortunately, the lengthening and hopefully warmer days will soon prompt other overwintered crops that have become dormant to start growing once more: winter spinach, chard, sorrel and hardy salad leaves like rocket, mustard and watercress. This is just as well, because nothing sown so far this year will be ready for ages.

The soil in early March is not warm enough for many seeds to germinate (broad beans being the most notable exception). In the meantime, I shall be busy sowing into modules indoors for transplanting outside later, which will provide an earlier crop than waiting to sow direct. Sitting in the to-do pile are beetroot, salad onions, leeks, lettuce, celeriac, cabbages, cauliflowers and calabrese. 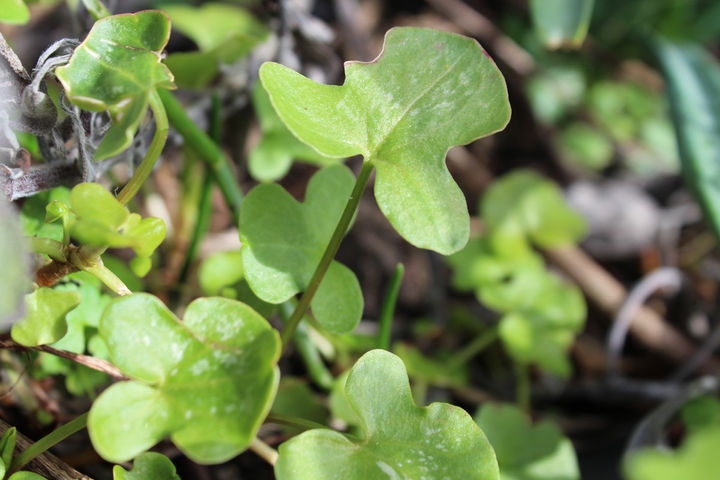 Sorrel is worth singling out for special mention because it’s currently being rediscovered after decades of relative obscurity here in the UK. Not so in France, however, where it’s always been a popular soup and sauce ingredient, and a tangy foil for meat, fish and eggs. There are three common types, all hardy perennials: broadleaved, which is the largest, is best suited for cooking, whereas buckler and bloody sorrel both make attractive and tasty salad leaves. If you can get your hands on some, try making this beautiful sorrel risotto with crumbled goat’s cheese. 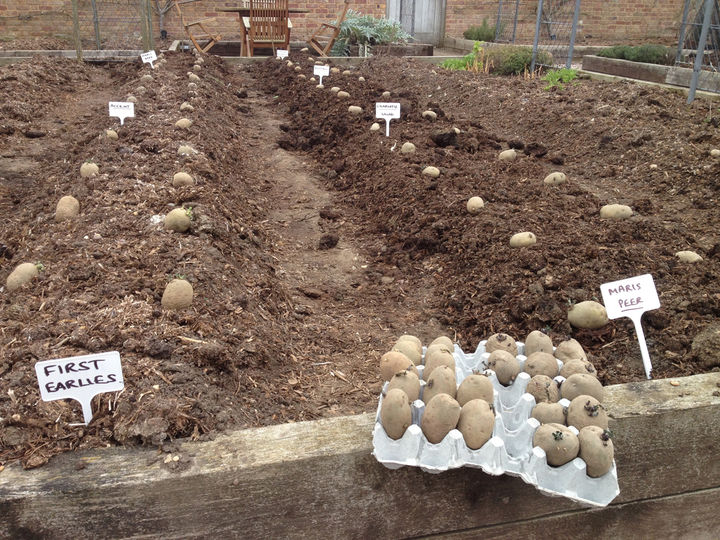 The seed potatoes are currently chitting indoors in egg trays. The idea is that developing some shoots before being planted out will give them a head start once they are in the ground. I’ll be planting the first early varieties in the last week of March. They’ll be ready at the end of May, which, together with broad beans, comprise the first truly substantial crops of the year. It’s a long wait! 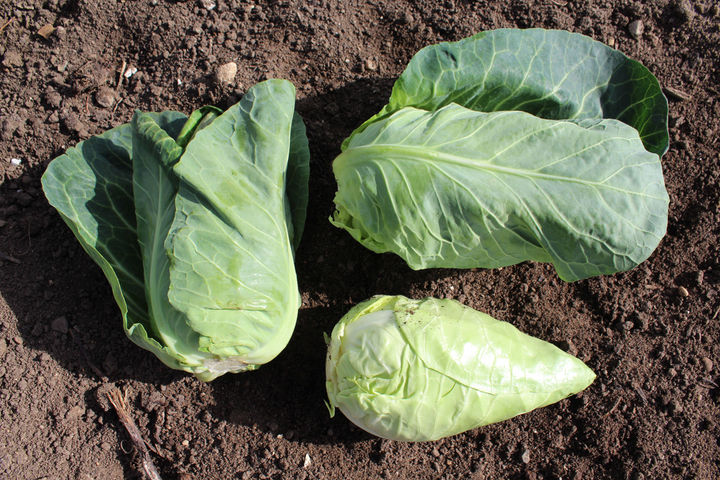 In the open ground, the kales are going over and starting to flower, though it’s worth knowing that these shoots can be eaten like sprouting broccoli. The broccoli itself, which started cropping in early February, is still going great guns. It’ll soon be joined by spring cabbage, compact and pointy, that was planted out way back in August. 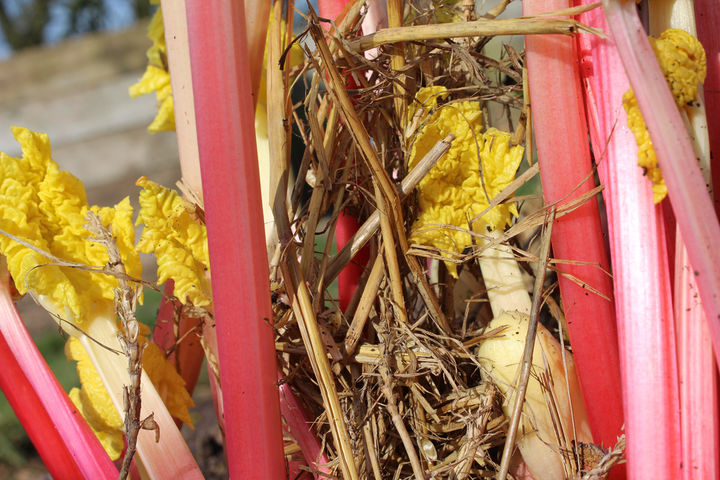 By the end of the March I’d expect to be able to harvest forced rhubarb and forced seakale. Both have been covered by big terracotta forcing pots (a bin or bucket is equally effective) for a month now, surrounded inside by insulating straw. The exclusion of light and increase in temperature induces the plants to break their dormancy earlier than normal and the resulting growth is blanched, sweeter and more tender. Forced rhubarb is great for both sweet and savoury cooking, try it in your Sunday roast or pair it with ginger in these rhubarb and ginger muffins. 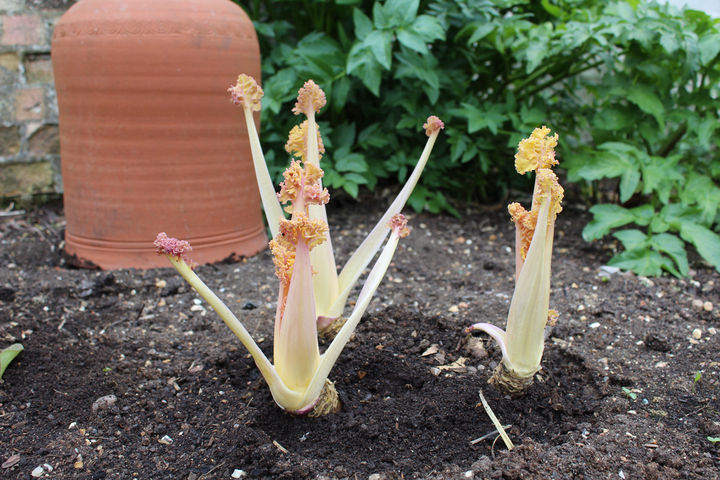 Forced rhubarb, with its pale pink stems, is an increasingly common sight in shops these days, but seakale is a good deal more esoteric. It’s basically a great big beach-dwelling brassica, the leaves of which, left to grow naturally, are too coarse for all but the properly hungry to bother with. However, if forced, the plant produces slender shoots with a lovely delicate mild cabbage flavour. 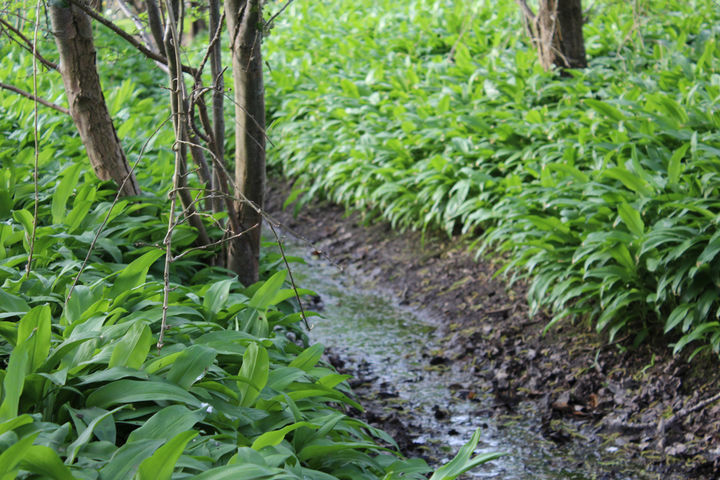 It comes as no surprise, then, that in former times, people took to foraging out of necessity to supplement their meagre menu. Luckily, some hedgerow greens pop up remarkably early. The two I seek out each year because they are actively nice ingredients are wild garlic (ramsons) and young stinging nettles. Ramsons frequent damp woodland from February to early May, forming huge carpets of foliage that produce unmistakably garlicky vapours. I’ve not included a photograph of nettles, since they are ubiquitous and are probably the first plant that all of us learn to identify as children. Nettle rash is no fun!