I realised my vegan week was going to be a struggle halfway through the first breakfast.

While smugly chewing my way through two slices of peanut butter with jam on toast – smug because there is no butter in peanut butter – I was informed that the palm oil in my peanut butter is instead responsible for 300 football fields of deforestation every hour.

A vegan diet is one that avoids all exploitation of animals. That means no dairy, no eggs, no meat, no fish, no honey and, apparently, no peanut butter. My attempt at veganism was all in the name of World Vegan Month – an initiative meant to persuade people to try the diet and feel the benefits. Even if you don’t want to follow a vegan diet, it’s still an initiative worth getting involved in, as I explain here.

As a strong believer in a broad and balanced diet, veganism doesn’t appeal to me from a nutritional perspective (also, I love pulled pork) but ethically it does strike home. I recognise the impact my diet has on the world and the animals. I treat meat with great respect, buying only from trusted sources and wasting as little as possible. So the knowledge that peanut butter and palm oil were exploitative of the rainforest meant it had to come off the list. Instead I got by on smashed avocado on toast with olive oil and basil. Breakfast was the least of my worries though. I had 10 lunches and dinners to get through.

Whether you follow it for ethical or health reasons, there’s no doubting veganism requires restraint and ingenuity. The funny thing is, you don’t miss the big things. Obviously I was going to miss meat, but I go vegetarian two or three days a week anyway. It was the little things I craved. Cheese was out, so was yoghurt, so was pasta and probably cake – and if I found myself at a kid’s party, there was no jelly for me.

Then there are the nutritional implications that need to be though of, but in that field I’m no expert. Luckily, our head nutritionist, Laura, is:

“At Jamie’s we always recommend a balanced diet with one to two meat-free days a week. That said, there is often unnecessary concern that a vegan diet will be low in the nutrients found in meat and fish such as protein, iron, calcium, zinc, vitamin B12 and vitamin D and the essential fats (omegas). If a vegan follows a well-planned vegan diet, that doesn’t have to be the case. You can make up the protein with beans, lentils and pulses, the calcium with green leafy veg like kale and spinach, and the good fatty omega acids with oils such as flax and rapeseed.”

And so I set about making tweaks to recipes with varying success. As a loyal employee, I used lots of Jamie’s own recipes, and indeed recipes from our guest writers, while also coming up with a few of my own. 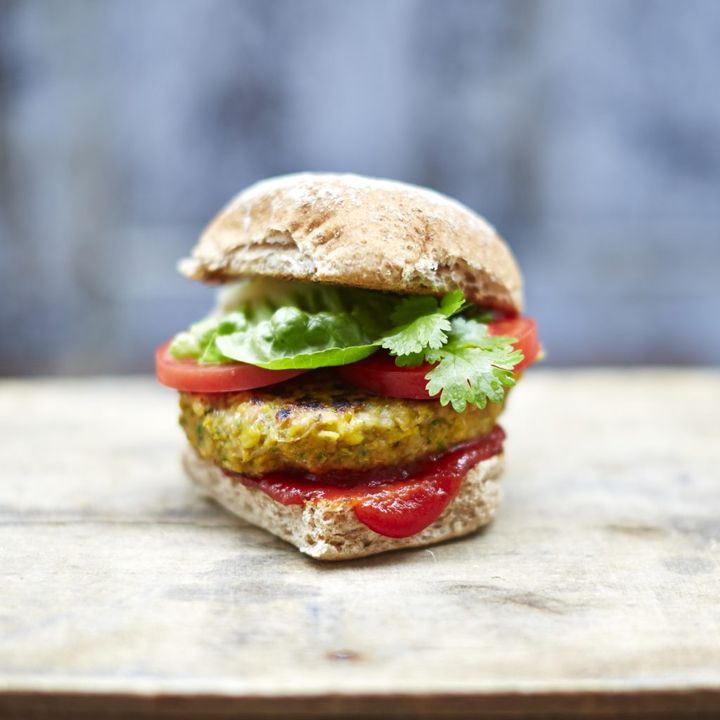 After that disastrous breakfast, my vegan burger was delicious – the kick of lime really brings it to life. I’ve had some awful, awful bean burgers in my time but this was on a different planet, especially with sweet potato fries. I also cooked up one of my favourite recipes from Jamie’s 15-minute Meals, Keralan curry (without the yoghurt dip, of course).

My quorn and bean Bolognese, however, was a very sad meal. The quorn had next to no texture at all, and doesn’t benefit from the 40 minutes you need on the hob for the flavours to all come together. My advice would be to use a hearty grain like farro or pearl barley instead, or ramp up the beans. You could also scrap that all together and go for what might be the greatest recipe tweak of all time, which can befound in Tim Shieff’s vegan shepherd’s pie.

Perhaps the biggest success I had, however, was my vegan chocolate cake. It is a triumph of a recipe, and proof that the vegan way of life brings out the best in people as chefs by forcing them to experiment. Before this week I would never have made a cake with oil in place of butter, now it’s in my recipe scrapbook for when vegans or dairy-free people come to call (truthfully, it happens), or when I want a cake with a lot less saturated fat (but still plenty of sugar).

This cake was born out of desperation. I was absolutely gagging for a treat and was determined to find a recipe that was decadent but in keeping with the ethics. What I came up with was a mish-mash of all kinds of recipes and ideas – and it was a complete success.

Preheat the oven to 175°C/350°F/gas 4 and grease a square 20x20cm cake tin. In a bowl, mix together the flour, sugar, cocoa power, baking powder and salt. Add 200ml of warm water, then the vanilla extract, oil and vinegar and mix until smooth. Pour into the cake tin and bake for 25 minutes, or until a skewer poked into the centre comes out clean. Remove from the oven and leave aside to cool.

Meanwhile, make the brittle. Put a medium saucepan on a medium heat and add the sugar. Allow to melt without stirring. Add the pecans and give it a mix until coated, then pour onto a non-stick baking sheet in a square and leave to cool and set.

Next, make the icing. Get a medium saucepan, fill with water to about 5cm and bring it to the boil. Place a thick glass bowl on top and make sure it’s not touching the water. Smash up the chocolate in the packet and empty into the bowl with the soya milk. Stir occasionally until melted.

Turn the chocolate cake carefully out onto a nice serving platter and pour the icing over the centre. It should spread out evenly, but help it with a spatula if required, then quickly smash up the brittle with a rolling pin and scatter onto the icing so it sticks. Serve with a nice black tea – stuff the soya milk!

Of course, some recipes don’t need tweaking. Some are vegan by accident, or simply by design from inception. Jamie’s roasted tomato soup from 30-Minute Meals is a stunner and really easy to knock up. There are few pleasures greater than those crunchy croutons just on edge of turning soggy from being dunked into the soup. It’s in moments like that that veganism seems easy.