Herman Rasmuson (SWE) is an innovator and entrepreneur, with a background as a chef.  As well as running several restaurants including Villa Söderås in Stockholm, he has competed in Sweden’s ‘Game Chef of the Year’ and written several cookbooks. One of these, “Syrat”, was chosen to represent Sweden at the “Gourmand Cookbook Awards”, the cookbook world championships. Herman has also received an award for best basic Swedish literature on meals from Måltidsakademien [The Mealtime Academy]. As founder of Herman Rasmuson’s Matbyrå, Herman consults widely about Nordic food and has been granted a Red Dot award for the design of his GarlicCard. 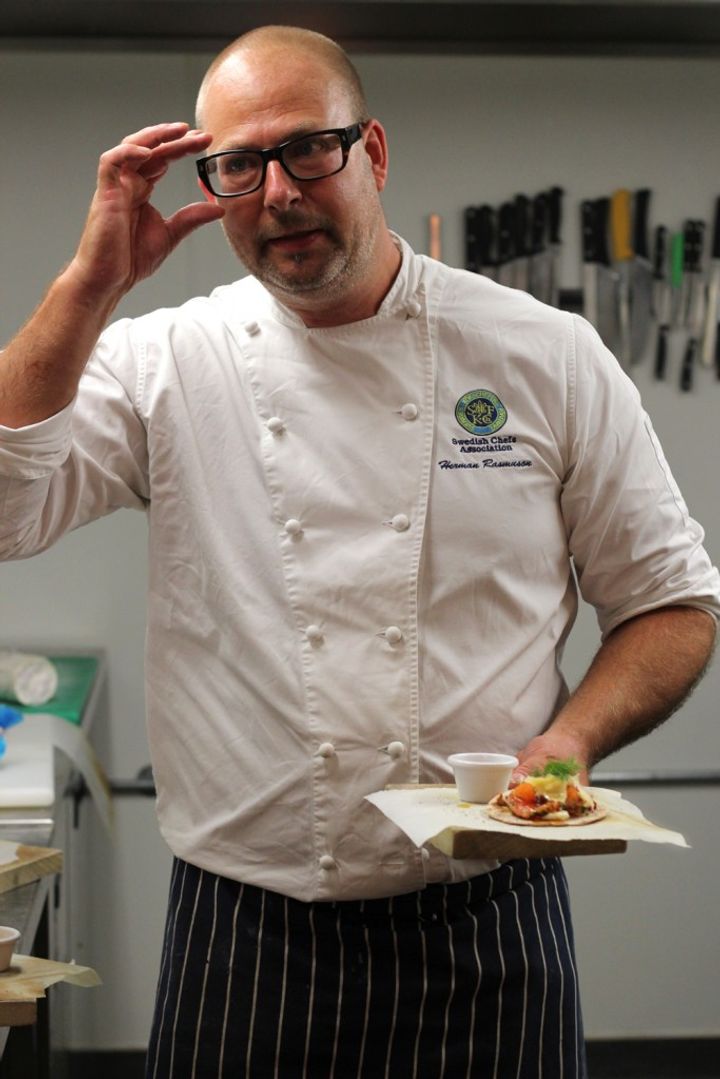 “Thanks to restaurants like Noma in Copenhagen, there is now a global focus on new Nordic food,” says Herman. “However, my interest in exploring a Nordic identity through food – for instance, in the contrasts between saltiness, sweetness and sour – started long before the New Nordic food movement took off. Typically, this incorporates centuries-old techniques such as preserving and curing produce, and working in tandem with the dramatic seasonal changes of Northern Europe.

“For London’s Ja Ja Ja Festival, I was asked to collaborate with The Roundhouse’s Made In Camden restaurant to produce a menu that encapsulated the spirit of a Nordic winter – the frozen, snow-filled months when families gather around the fire to share hot, filling dishes that keep the cold at bay. This results included slow-braised piglet shoulder, cereal-crusted smoked pollock and a venison fillet served with roast chestnuts, rowanberry jelly and pickled cucumber. 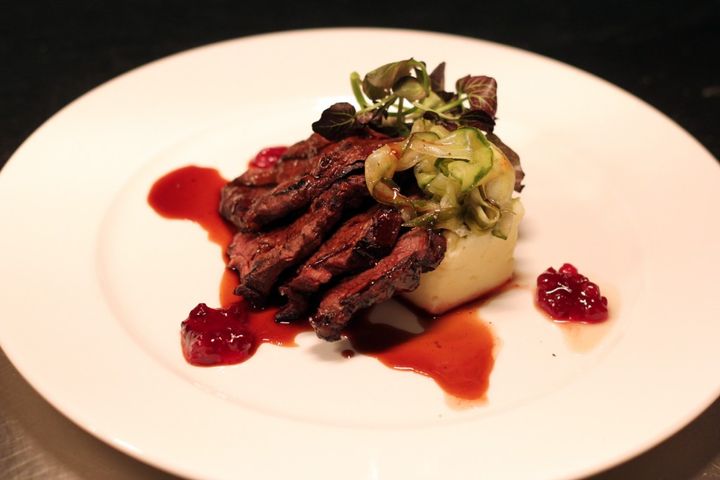 “However, for our signature dish I came up with the idea of a ‘Nordic Crispbread Pizza’. This used Peter Yard’s crispbread as a base, with toppings of pickled Frøya salmon loin, sliced potatoes, cream cheese, Nordic cheese, dill, radishes, pickled chanterelles, Kalix roe, and finsk svart stör (a Finnish caviar). All were topped with warm melted butter, and a hint of schnapps. 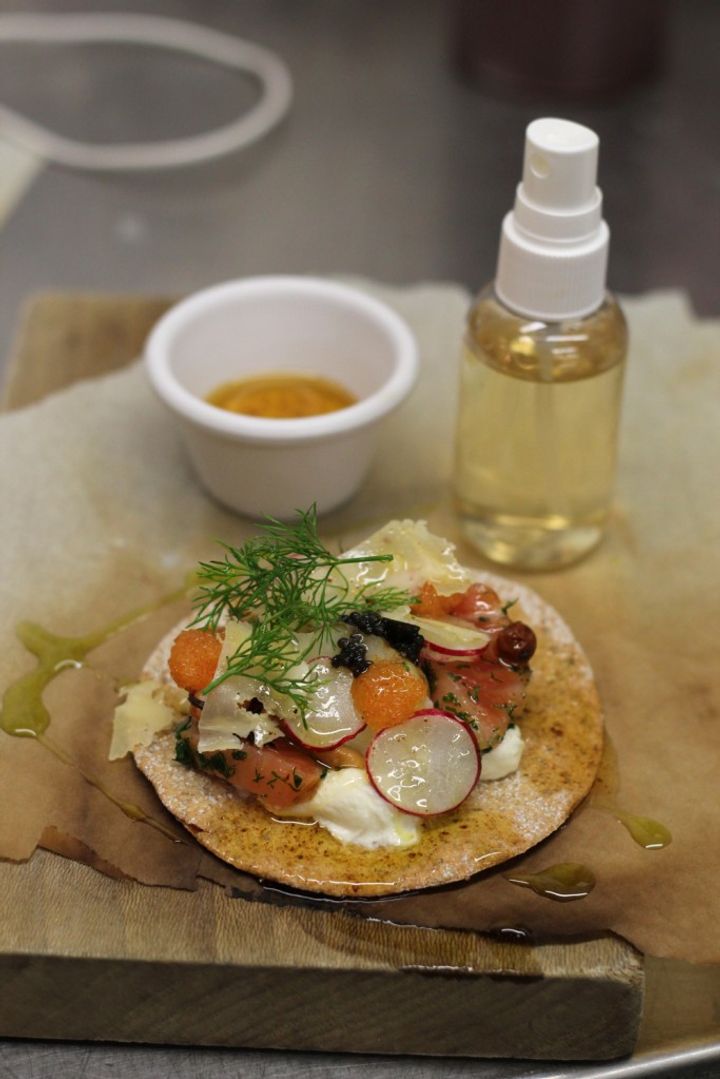 “The success of this dish, in my opinion, is in the salmon. In this instance we used ‘pickled salmon loin’/’Surlax’ and a generations-old recipe from a fisherman in Loftahammar, Småland.  I have experimented for a few years now to find a modern interpretation of the ancient Swedish “surlaxen” and the pizza presented it perfectly – using a select backloin from Fröya (which is just outside of Trondheim, in Norway) the fish is cured in a mixture that includes 12% vinegar, sugar, allspice, cinnamon, ginger and fresh sliced radish. The salmon is left to draw for 14 hours, leaving the exterior perfectly ‘cooked’ by the vinegar, while the inside is sashimi-like with a slightly salty tone. 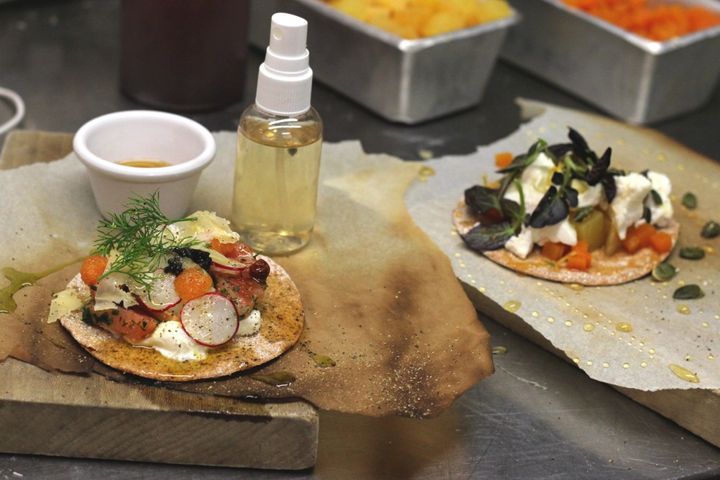 “As ever, my inspiration is to present pure clear raw produce, flavors, origins and sustainability. To make food that combines the ancient and the modern. My dream now is to find a partner in London who wants to start a Pop-up Nordic restaurant with me.”

Herman was in London in a collaboration with the Ja Ja Ja Festival and the New Nordic Food program – a Nordic Council of Ministers initiative that promotes Nordic food in the region and internationally.

Sign up to Ja Ja Ja’s mailing list here for info on more music and food events plus details of next year’s Ja Ja Ja Festival.

All photographs by Merlin Jobst

More from People We Love