Every month has much to recommend it, even November, although I can’t imagine many people would declare it their favourite. The glorious autumn colours now clog the drains and with the end of Daylight Saving Time there’s suddenly no light after work. Despite this, there are still reasons to be cheerful.

The first hard frosts are something to look forward to: they finally draw a line under the gardening year. The lawn stops growing and even the weeds slow right down. Those first cold, crisp days with clear blue skies are to my mind among the most beautiful of the whole year. There’s real satisfaction from getting on with the task of tidying the garden up for winter. Fallen leaves are collected and piled in their own compost bin to rot down into leaf-mould, an excellent soil conditioner. And yes, although I’m a grown adult, I do still kick the drifts of leaves about a bit before picking them up. As for weeding, the goal is to get the lot done before Christmas so as to hit the ground running next year.

Garlic can still be planted throughout November. I deliberately stagger mine between mid-October and early December so that I can send the superior fresh ‘wet’ garlic to Fifteen Restaurant over the longest possible period. Hardy overwintering peas (try ‘Meteor’ or ‘Feltham First’) and broad beans (‘Super Aquadulce’, ‘The Sutton’), if sown this month, will be ready in late May/early June, a welcome couple of weeks earlier than spring-sown crops. That’s ages away, so it’s fortunate that there’s still plenty to eat in the vegetable garden right now, with the following crops newly in season. 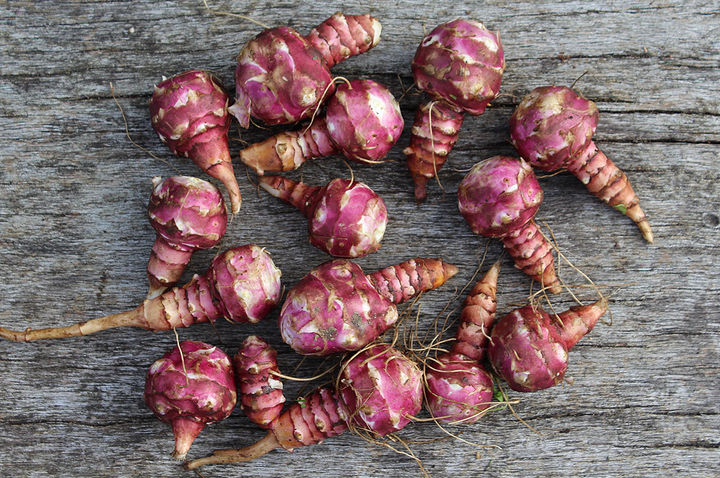 You can serve Jerusalem artichokes in all sorts of inventive and delicious ways –  mashing, roasting or sautéing them is a good place to start. If you’re unfamiliar with them, I should start by saying that they have nothing to do with either globe artichokes or Jerusalem. I imagine that when the British initially encountered them – they were first brought to Europe from Cape Cod in Massachusetts by French explorers – artichoke was the nearest reference point they had taste-wise and the name just stuck. The similarity is vague at best. Jerusalem is most probably a corruption of the Italian girasole, sunflower, to which the plant is closely related. The foliage and tiny flowers are similar looking. This is an example, I strongly suspect, of the British tendency to anglicise foreign names to align with sounds or words they were more familiar with or found easier to pronounce. I always think of naranja in Spanish, which we converted first to norange and eventually to orange. Ever a nation of linguists!

Under the tall, swaying leafy stems lurk many knobbly tubers, whose flavour is mild and nutty. It’s an easy crop to grow. Like potatoes, pop one tuber in the ground and you get a dozen back. Be sure to remove every one at harvest time, however, or the ‘volunteers’ will sprout repeatedly and destructively through whichever crop you’ve followed on with. Unlike potatoes, however, they contain inulin rather than starch, which is apparently good for gut flora, but indigestible. This makes them low in calories, but beware – they can produce lively flatulence if eaten in large quantities. 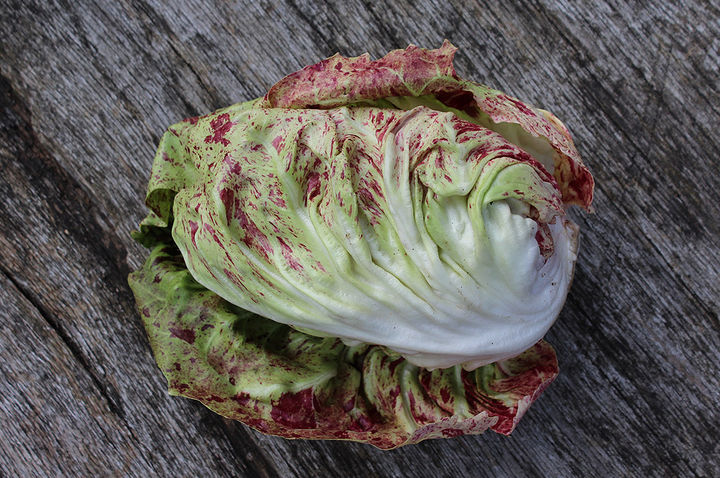 Deliciously bitter chicory is perfect for tossing in a salad

Every vegetable garden should have some chicory. In terms of timing it follows on nicely in the crop rotation after broad beans, garlic or early potatoes and provides welcome winter salad leaves. The taste is bitter, it’s true, but less so after some frost, and once mixed with other leaves and dressed it becomes rather refreshing and really lifts the whole lot. There are many varieties out there, many of which come from the Veneto. Some – ‘Treviso’, for example – are robust enough to grill or braise. White veined, red-leaved cultivars such as this and the round ‘Palla Rossa’ are also known as radicchio. I‘ve become a real fan of ‘Variegata di Lusia’ and ‘Variegata di Chioggia’, both round, dense, hardy and beautifully coloured, a dazzling blend of pink and green. ‘Castelfranco’ is another favourite: looser leaved with a yellow heart flecked with red. If left to bolt in spring, chicories produce edible flowers.

Endive is a very similar plant to chicory (both are species of Cichorium), but is non-hearting and less tolerant of the cold. They should be eaten this side of Christmas. Some cultivars have smooth leaves but the frizzy ones are more commonly seen in the UK. The centre can be blanched a creamy yellow and sweetened up by laying a plate over it in situ for a couple of weeks. 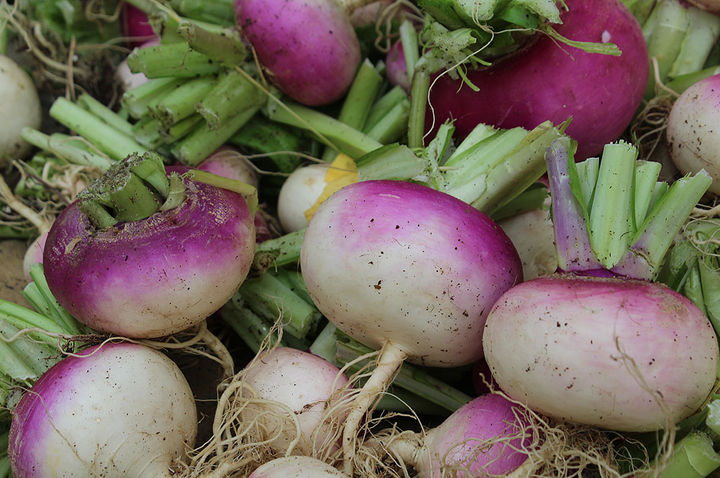 Turnip and swede have historically been important food crops for both humans and livestock, growing well in the British climate. Turnips mature quickly and the tops make good greens. I’d recommend picking them when small and nutty and adding them to a lamb curry. Swedes (short for ‘Swedish turnip’ – they arrived from Sweden around 1775) are closely related but larger, hardier and sweeter-fleshed. It’s a useful ingredient for winter soups and stews and famously makes a hearty mash. Before pumpkins became widely grown in Britain, turnips and swedes were used for lanterns instead. Both store well over winter in boxes of spent compost. 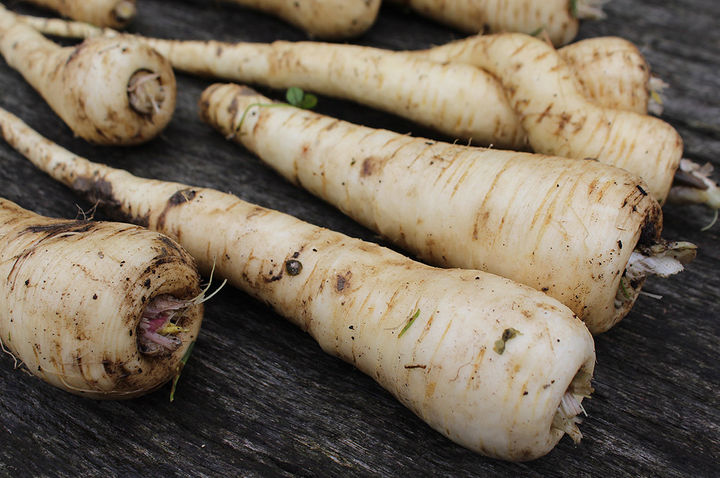 Roasted parsnips make the perfect addition to a Sunday roast

As long as you can get them to germinate – seed only remains viable for a year, so always use a fresh packet – parsnips can be relied on from November until March, when they start to flower. Leave one sometime: it grows tall and sports impressive flower heads (umbels, in the trade). Cold won’t kill a parsnip, but if the ground freezes solid during a cold spell, they can become completely inaccessible. It’s a good idea to dig a few up in advance of any such weather and store as you would other root crops. 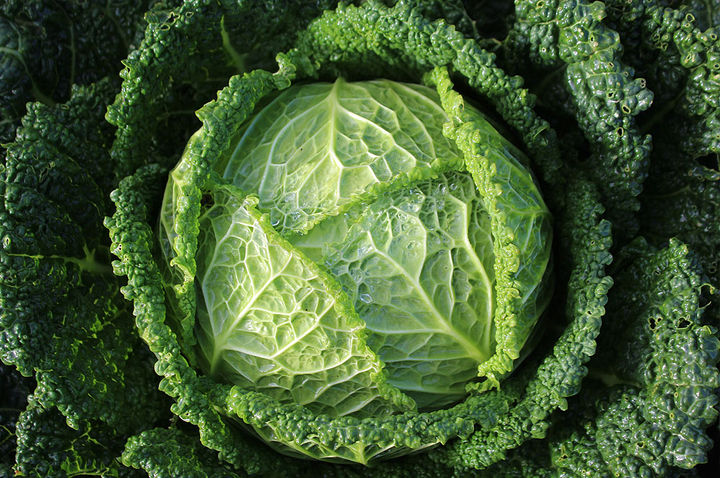 Savoy is the most finely textured and flavoured of the cabbages. Its leaves have that distinctive crinkled appearance and become progressively more blanched and tender the nearer the centre you go. The smallest ones are very palatable raw as a salad ingredient and also flexible enough to be stuffed. It would be a culinary crime to boil them to mush. The plant may not look as thuggish as other cabbages, but it’s actually one of the very hardiest and will stand all winter. If you’ve grown a good one, you can be justifiably proud – it’s not that easy!