Nuremberg is part of Franconia, Franconia is part of Bavaria, Bavaria is part of Germany and Germany is a very complex place indeed with huge regional variations. The one thing that is constant in this ever-changing city, you’ll be glad to hear, is the food.

My guide lets me in on a few secrets of the ‘new’ city and its history before we get stuck into the grub.

An astonishing 95 per cent of the old city was destroyed by Allied bombers during the Second World War, although you wouldn’t know it as since then there has been a certified effort by the authorities to create a city which reflects its medieval heritage. 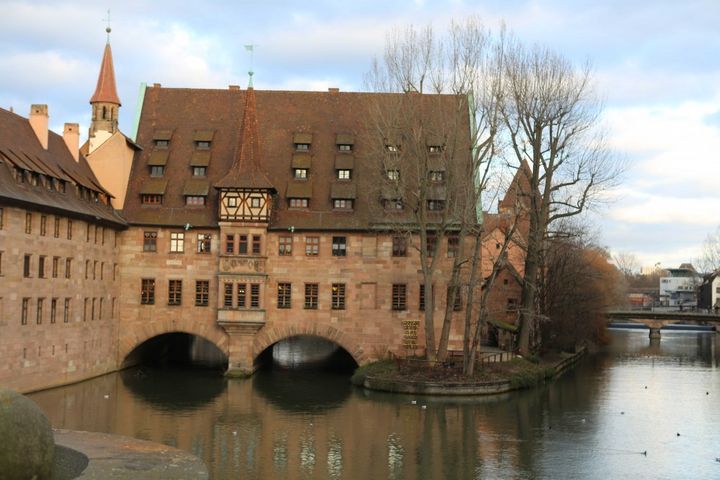 Vast timber houses have been rebuilt on the same spec as their predecessors, the castle, two cathedrals, a market square (famous for its Christmas market), Albrecht Durer the artist’s home and many other attractions have been restored or maintained to keep the tourists flocking into this city of 500,000 residents.

Some of the world’s biggest companies have their roots close by – Adidas, Puma, Siemens, to name a few – and this has led to a disparity with Berlin in the south, which has fewer jobs and prospects for German youngsters. This means Munich (120km) and Nuremberg are vibrant and affluent, bristling with confidence and keen to showcase their charms.

No sausages yet – you’ll have to wait as there’s a bit more of this complex relationship Germany has with itself and its history first.

“We are now more able to talk about our past,” a ‘German friend’ tells me, “not so long ago it was too shameful to mention the war, even waving a German flag felt too nationalistic; but now we are embracing the future without forgetting the past.” She tells me the first time she waved a German flag was during the Football World Cup in 2006 when it was hosted by Germany, and even then, she admits, it felt odd. From what I can gather, Germany is united by sport, whereas the areas are so utterly different to one another that there is an unavoidable parochial mindset. “I can tell in an instant whether someone is from Munich,” adds Friend, “and if someone is from way down south, I can hardly understand a word they say!”

I’m surprised to hear that there is still some animosity about the war from surviving soldiers – let’s not forget that Hitler’s Nazi propaganda rallies centralized on Nuremberg in the 1930s. My friend’s grandfather apparently still balks when the USA or Britain is mentioned with any fondness.

So let’s talk about the food, which is so important to the Franconian identity.

I’m taken to a uber-traditional restaurant Albrecht Durer Stube near the castle and take a table with chef-proprietor Michael, who tells me all about local specialities. 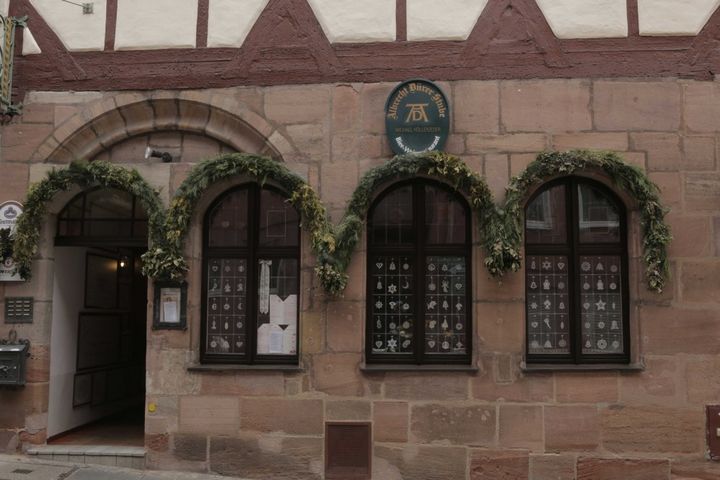 Well, most importantly there is pork; primarily it is minced up with a blend of mace, capsicum and salt and stuck in a local bratwurst. The Franconian variety are tiny sausages; thus sized, apparently, to allow do-gooders to push them through keyholes of victims’ homes during the Black Death in the 15th Century! They are delicious, boiled or grilled, and eaten with horseradish and mustard. I’m also given a cut of pork which is new to me – a divided shoulder, or ‘little shovel joint’ named after the shovel-shaped bone. It is a pork shoulder cut vertically into three, slow-roasted until the crackling is just right, and served with potato dumpling – a comforting mix of spuds and corn starch. Loads of meat and a supremely tasty dish. I also try white sausage, blood sausage, sausage meatballs and pork terrine. All of them lovely, but then again Michael’s family has been serving this up for three generations in the same restaurant. And then I’m told about the raw stuff – uncooked, uncured pork, minced and spread on rye bread with red onion and snipped chives.

It’s like beef tartar and I’m assured that it’s perfectly safe, despite it going against all of my English reservations about raw meat. So long as the meat is less than 24-hours old then it is perfectly safe and permissible: and it’s delicious, I promise you; a tenderness which just dissolves in the mouth. 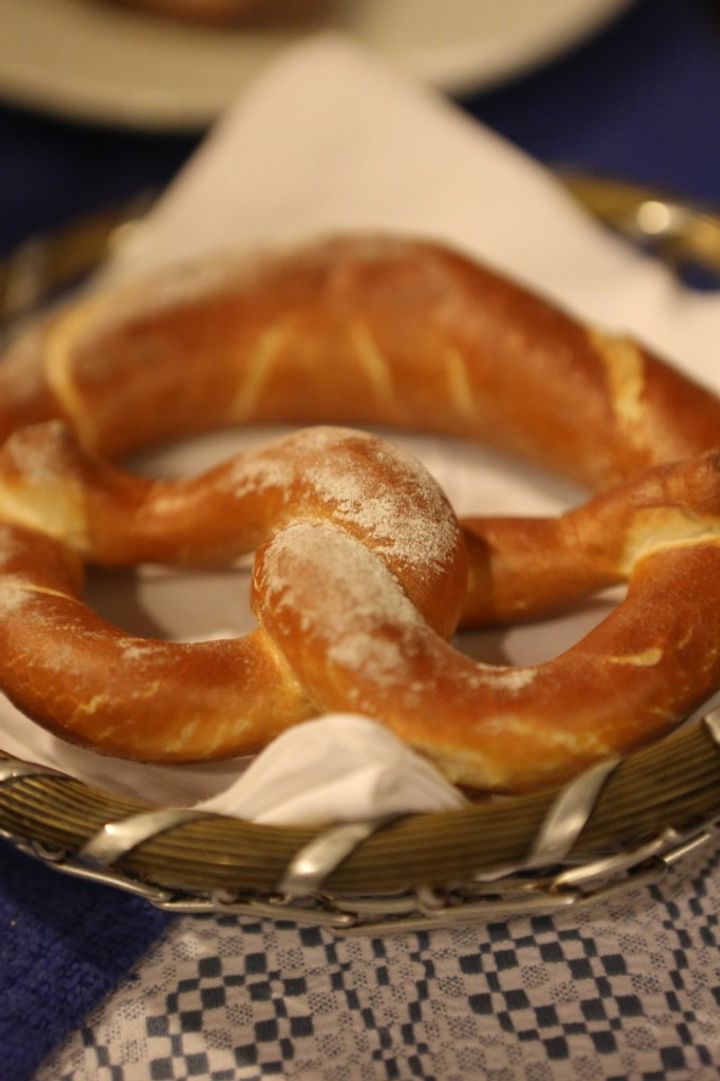 I also try the other local bastion, a pretzel – or ‘brezel’. Soft and chewy, salted and comforting, I can see why there is a pretzel hut every 30 metres or so in the city centre. Then a beautiful plate of dessert, another gorgeous dark beer and some of the local wine, a tart and cherried affair. There’s a strong element of sharing here, not only with the food platters, but also with the other diners as we are asked to shove over a bit to allow the next diners (who were early) to sit down. Not a problem at all, as Franconians are extremely friendly and love a good chat.

Jamie is big news here, his latest book (Save With Jamie) is advertised everywhere and my guide can’t figure it out as he’s by far the mot famous culinary celebrity here, in a region which so strongly identifies with its own culture. Still, that’s the magic of Jamie, his appeal is international.

While in Nuremberg, I was asked to visit the BioFach, a huge (and I mean huge) expo for international producers and distributors of organic food. It was a fairly corporate affair to be honest – a world away from its early days of local farmers bringing their produce down from the surrounding towns and villages. This is big business here as Franconians in particular – and Bavarians in general – are keen on sustainability and organic foods. My guide proudly asserts that Nuremberg was the first ‘organic city’ back in the early 1980s and that a new law passed very recently which could see genetically-modified corn being grown in the area is a threat to this ethos. 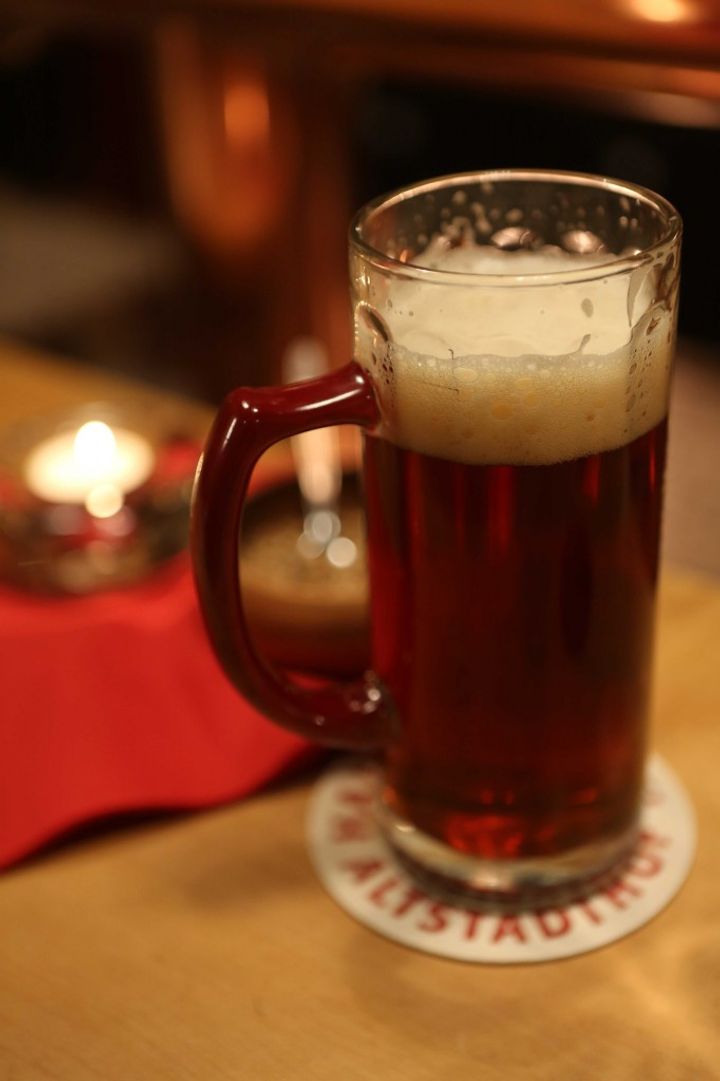 And just how important is the beer here? When the ancient part of the city was built, the forward-thinking architects carved out thousands of metres of tunnels into the sandstone, just to store the beer. Over the centuries this network has grown and created a subterranean web, some of which is open to the public and used by beer makers and distillers as it keeps the product at a constant 8-degrees all year round.

The cellars beneath Brauhaus Nuremberg (a near-perfect traditional independent brewery) are creepy, labyrinthine affairs and the beer that comes out of them is wonderful. The malt is strong and the hops are subtle in a majority of the offerings, with the red and the bock outselling the other beers at this one brewer I visited.

Dinner that evening was beer-inspired, with a pork schnitzel breaded in the malt used for the brewing and a dark, sticky beer goulash. Pud was a ‘beeramisu’ – a tiramisu substituting beer for coffee. I think you’ve got the theme by now!

This love of food and beer, coupled with a real sense of optimism and fun, means this is a fabulous place to stay and eat. Just 24-hours in and I’ve fallen for the charms of Nuremberg – both the hidden and public and the raw and cooked.