A lot happens in October. It’s a month of unstoppable transition, like April’s explosion of life… only slower and in reverse. It may start with some warm days that almost hark back to summer. There’ll even be a few summer crops still doggedly carrying on but ripening ever more slowly.

As someone who rarely buys tomatoes, courgettes and green beans out of season, the day they finally grind to a halt, nailed by the arrival of the first frosts, is always a sad one. Never mind: the autumn leaves, which will peak at some point this month for a few glorious days, provide ample compensation. By Halloween, most will have fallen.

Meanwhile, I have two important jobs to do in the vegetable garden. The first is planting garlic for next year (it really benefits from a period of winter cold), a lovely illustration of the continual, cyclical nature of gardening. As most things start to shut down for winter we’re already looking ahead to next summer. The other is to store some undamaged root crops – carrots and beetroot especially – in boxes of old compost for eating over winter.

There are also a number of new crops that are now mature enough to be harvested. They may not be quite as glamorous as summer’s fare, but each has its place. Some can even be counted among the most useful garden crops of all. 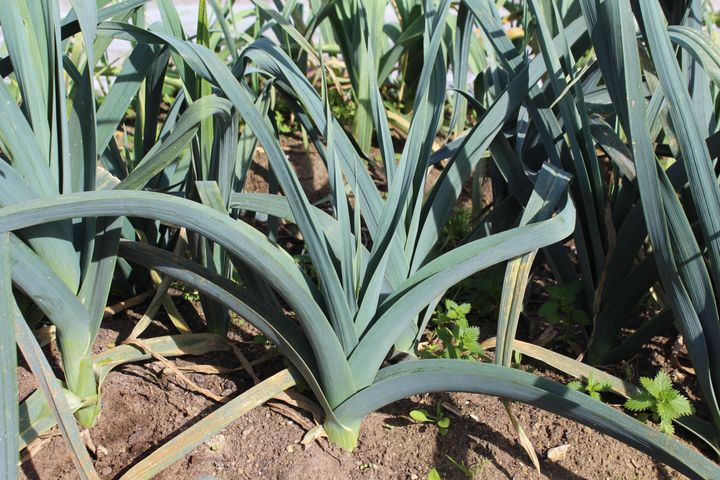 The leek is certainly one such vegetable. If I had more space to devote to them I’d start eating them when they were barely larger than salad onions. As it is, I don’t, and so try to hold off until the early varieties have attained a fairly respectably size. By sowing a mixture of early, mid and late cultivars it’s possible to eat leeks from September to April. Although they may freeze solid and be impossible to prise from the frozen soil, hard frost will not kill them. Leek ‘flags’ (leaves) bent by cold and rimed with frost is one of my favourite winter sights. 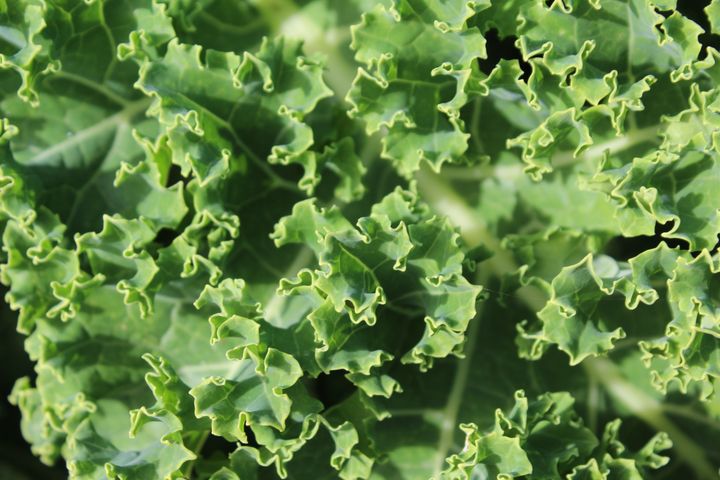 Kale is another reliable staple. It is, in fact, the hardiest of our brassicas, with the curly leaved varieties heading the pack. I am fond of ‘Pentland Brig’, which throws out lots of tasty side shoots in early spring. I think the finest flavoured and textured kale is cavolo nero, but being from Tuscany rather than Scotland it’s not so tough and will get frost-nipped in a cold winter. I always include it in my seasonally varying versions of ribollita, though. 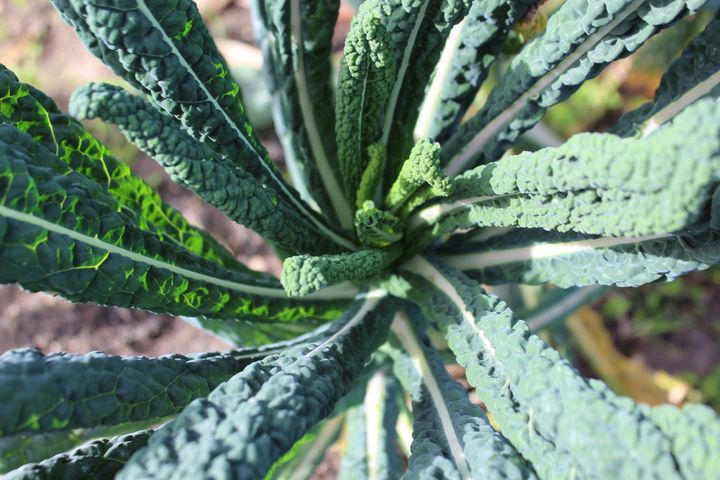 Again, while it is possible to eat kale at any stage from microgreen upwards, I prefer to let them get quite big before I take any leaves, so that they can withstand several bouts of cutting during the coming months. It is said that frost reduces the inherent bitterness of the leaves, which is another reason to be patient, though some people actively like kale’s bitter taste.

I’m not an evangelist for home-grown celery, since it is cheap to buy all year round and actually fairly labour-intensive to produce. Traditional ‘trench’ varieties are grown in trenches, as the name suggests, and are earthed up gradually. This blanches the stems, making them sweeter and less stringy. However, beautiful pink-stemmed cultivars do exist and I think the necessary cosseting is worthwhile for a few such plants. More modern self-blanching varieties now exist, which makes life easier, but sadly they do not come in pink.

I’ve a lot more time for celeriac, which is actually a variety of celery that has been bred for its swollen stem-base. It wins no prizes for beauty, but it’s a versatile winter vegetable. It roasts and mashes, makes great soup and also grates raw into salads, where at this time of year I like to pair it with russet apples, also in season. Celeriac dislikes really cold weather, so mulch it with straw or lift before Christmas and store as for beetroot.

Florence fennel, as bulbing fennel is called, is a classy vegetable that’s expensive in the shops. It’s not easy to grow – even a bolt-resistant variety can start to flower rather than swell into a bulb at the base if it gets too dry, too hot or is watered too irregularly. It is possible to get a crop in summer, but much more unreliable than sowing into modules in July and planting out in late summer for harvest in late October and November. Besides, earlier than that and I have a lack of space. I find that fennel follows on nicely into ground recently vacated by broad beans, garlic or early potatoes, though it will need covering with fleece or cloches as the nights get cooler. The crisp texture and clean aniseed flavour has so many uses. I use it risottos, in that ribollita and serve it alongside pork and fish, all of which are great, if uncontroversial. The feathery foliage can be used just like herb fennel. I sow chard at the same time as fennel for the same reason: that it bolts quickly in summer. Neither runs to seed as easily as spinach, however, for which chard is a good substitute. Though not a true spinach, green-stemmed varieties of chard sometimes go by the name perpetual spinach in recognition of its comparative ease of cultivation.

The cultivar pictured here is instead the handsomely multicoloured ‘Bright Lights’. By October it has reached a decent size and can be cut regularly, right into winter. It’ll recover more quickly if you cut leaves individually, working inwards rather that cutting right across the top of the whole plant. Sustained cold will eventually cause it to die back, but it’ll sprout again in early spring before finally bolting in April. It’s such a useful vegetable – try it served with lemon and a little oil, or on a lovely crostini.

Many people seem to dislike parsnips, finding their sweetness too cloying – I believe that’s why, anyway. I love them myself, especially roasted and eaten like chips. But if you are one of those people, try growing parsley root (aka Hamburg parsley) instead. It looks the same, but it’s less sweet, tasting (perhaps unsurprisingly) like parsley, but with hints of carrot and celery in there too. The tops are just like flat-leaved parsley, but being a little coarser are better used to flavour stocks, stews and casseroles than as a garnish. The roots themselves are sometimes added to borscht in Poland and Russia. I usually roast them as I would parsnips, though the taste always wrong-foots people who have not encountered them before. 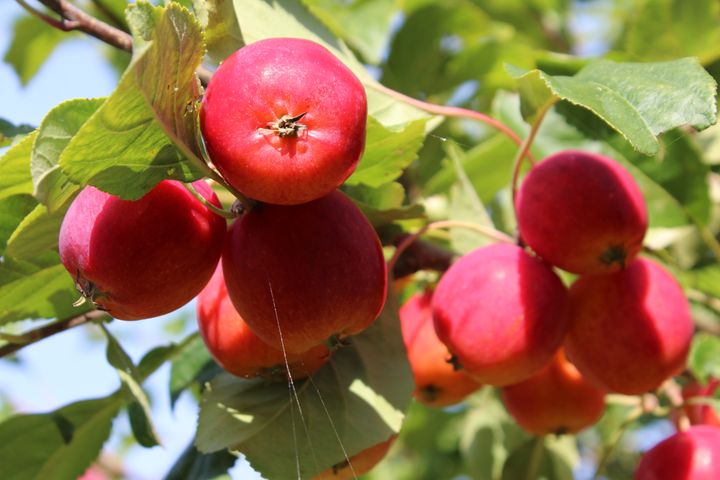 There’s still some fruit to be had in October – damsons, apples, pears, perhaps even a few autumn raspberries still – but not a lot that’s newly in season. The exceptions are crab apple, medlar, and quince. Crab apples are too hard and tart to be eaten fresh, but they make a wonderful jelly. Since they contain a lot of pectin they are also useful for adding other preserves to make them set. They can be found growing wild in hedgerows, but some very colourful garden cultivars now exist. 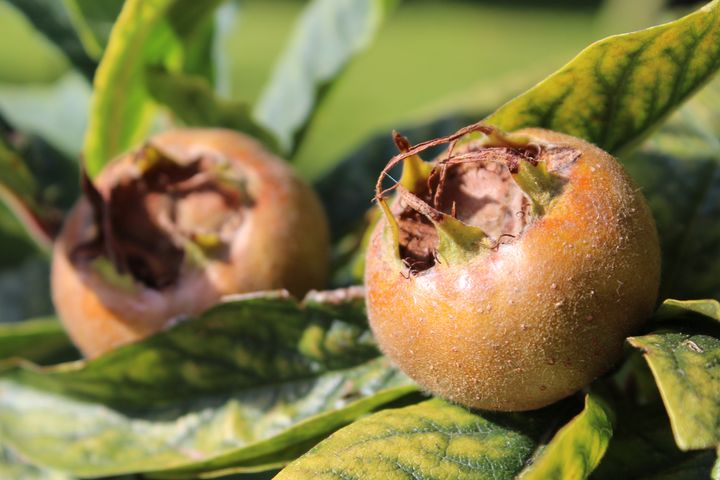 It is not immediately obvious that medlars are edible. They look like fat brown rosehips (they, along with apples, pears and quince are all in the rose family) but they need to blet – soften to the point of rotting – before they can be eaten. They were once much more widely grown. Some people bake them and eat them with cream but it’s definitely an acquired taste. I like to eat them raw, squeezing the pulp straight into my mouth. It’s strangely reminiscent of toffee apple with the slight fizziness of tamarind. It is medlar jelly that is most deserving of praise, genuinely tasty rather than just a curiosity. Deep orange in colour, it accompanies pork and game particularly well. 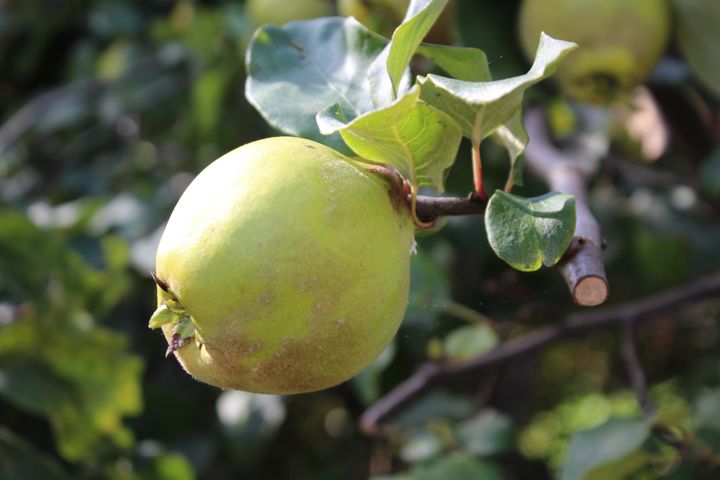 I shan’t say much about quince because it’s the focus of my column in Issue 63 of Jamie magazine, except for the fact that they smell absolutely gorgeous. Both they and medlars are picked late this month and brought inside to ripen up before use, by which time it’s usually November.