Spain are reigning world champions; not only in football but, to my mind, in the art of small food as well.

Most of us will, of course, think of traditional tapas when our minds turn to Iberian food: of rustic bars in sweltering old towns, with gorgeous pata negra Iberico hams hanging behind the counter; of bills being written in chalk upon the countertops; of small plates of anchovies, piquillo peppers, fried chorizo and squid in round brown dishes, usually served by an impatient native; and of glasses of sherry to start it all off – bliss.

But there is another way – the way of northern Spain (and a little bit of France) in what is called Basque Country and Navarre. It’s called pintxos, or pinchos, and it’s utterly delicious.

Pintxos is a form of tapas, or finger food – hors d’oeuvres if you’re posh (or French) – and everything has a cocktail stick in it. The Spanish word for cocktail stick is, of course, “pincho”. The snacks are often served on a slice of bread and, slightly differently from their southern counterparts, all the food available can be seen on the countertop rather than being prepared in the privacy of the kitchen.

The pintxos capital is undoubtedly San Sebastian, which, along with Lyon and Sicily, could easily claim the title of foodie hotspot of Europe. It is a small town with a heavenly beach, and for a large chunk of each afternoon turns into a ghost town. Where does everyone go? Well those who aren’t having a siesta or a swim are enjoying the often thrillingly innovative snacks in pintxos bars with a glass of wine or cold beer.

Given that San Sebastian is a coastal town, a strong fishing heritage comes across in the pinxtos, with cod, hake, anchovies, octopus and squid playing the starring role in a majority of the dishes. Last time I went there I had cod brains! It was more delicious than it sounds, albeit a tad salty.

Some of the bars offer fancier versions, including lobster with caviar, cured rabbit ragùs and artichoke intertwined with some of that insanely beautiful Iberico ham. It can be a true art form.

However, the fussy foreigner’s palate is always catered to, with traditional mainstays such as salt cod croquettes – a fantastic recipe for which I’ve included below – olives, and tortilla (omelette) always being available.

In San Sebastian you don’t just visit one pintxos bar, you visit nearly all of the bars along the strip. So if you find yourself there don’t be shy; just point at what you want and they will plate it up.

In the meantime, though, give these wicked Salt cod croquettes a try – they’re very simple to make and are a perfect introduction to northern Spain’s answer to tapas. 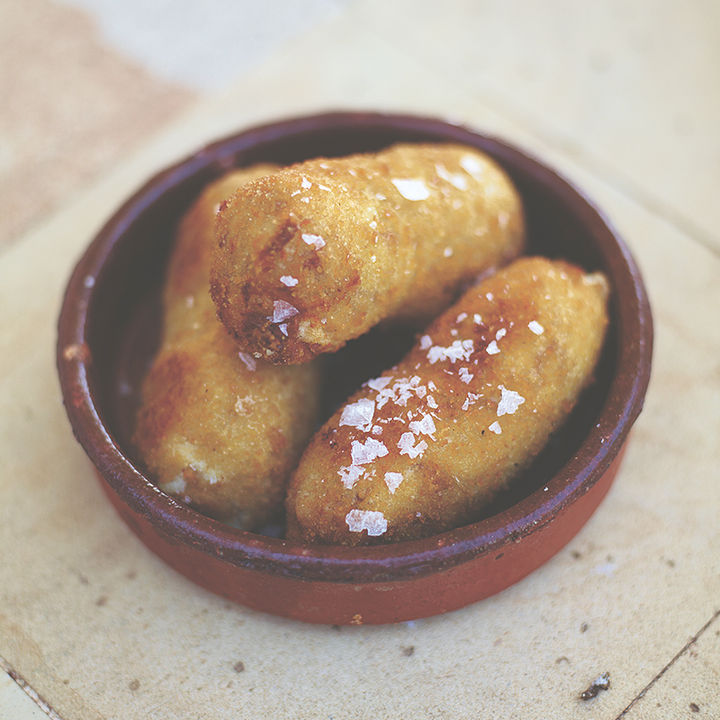 Rinse off the cod and poach it in a saucepan of simmering milk for 15 minutes. Remove cod and allow it to cool, then flake into a bowl (checking for any bones) with the potato flesh, cream, lemon zest and a glug of olive oil.

Check for seasoning (you won’t need much salt) and gently combine the ingredients, then shape into croquettes (half a sausage length) and leave in fridge for 1 hour.

Line up three bowls containing the flour, beaten egg and breadcrumbs (the spiky Japanese ones known as panko are best), respectively.

Take a croquette, coat it in flour, then dip in egg and finally coat entirely in breadcrumbs.

Deep fry them in hot oil for 3-4 minutes, then serve with lemon wedges and slices of cold, marinated red peppers.