Think of some of Europe’s most amazing food and produce and there’s a fair chance that it’s protected by a PDO.

From cheeses to ham and pies to wines the European Union’s Protected Designation Origin ensures the areas these foods are from are the only ones that benefit from making it.

I spent a day with Chef Jun Tanaka talking about some of the most famous examples and then whipping up a lunch.

In the UK perhaps the most well-known foods with a PDO are Stilton cheese, Melton Mowbary Pork Pies and Jersey Royal Potatoes, but Jun wanted to chat about Continental produce.

There were also experts on hand to advise from the various producers being showcased – at the Ateliers Des Chefs cookery school and general food nerd emporium. 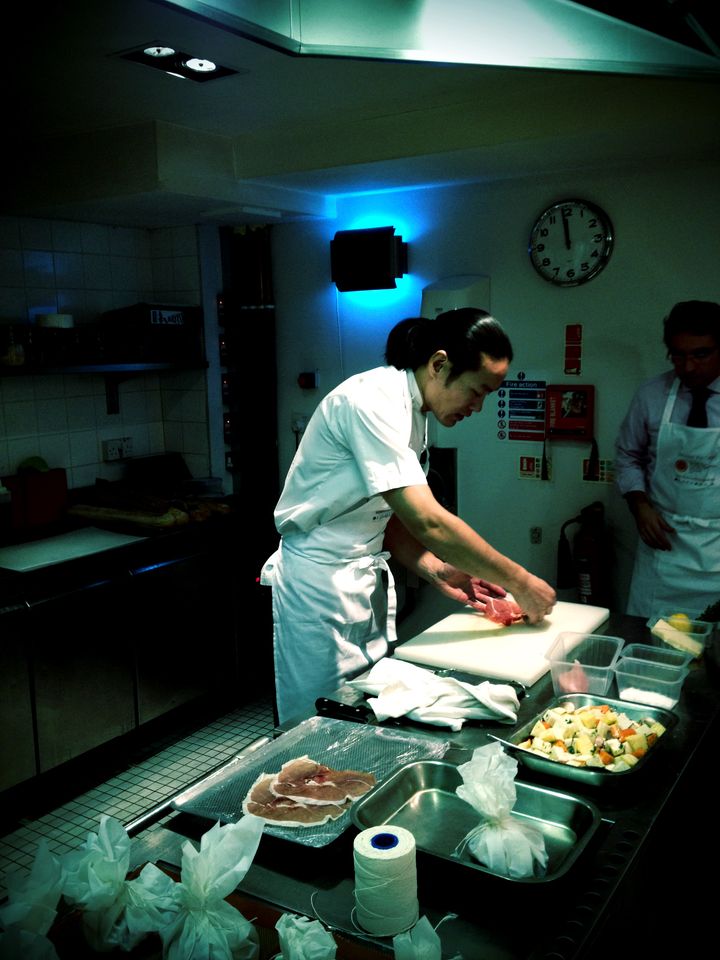 For our main course we cooked up a chicken breast containing two special PDO ingredients.

Per portion take four slices of Parma Ham and lay out slightly overlapping on a board. Then grate your lovely Parmesan (generously) on top of the ham, followed by the zest of quarter of a lemon and a few fresh thyme leaves. Grind some black pepper on a good sized free-range chicken breast and place that on top of the ham. Then carefully roll it into a parcel and put aside. On a different board peel and chop into small cubes some carrots, celeriac, whole garlic cloves and swede, toss them in a deep baking tray in some honey, olive oil and fresh thyme.

While this was cooking it gave me a chance to talk to Parmesan expert Simone Ficarelli from the Parmigiano Reggiano Consortium. He told me that the best way to tell if a Parmesan is young or mature is to look at the white flecks in it. These are crystals which give it a lovely chalkiness and the more mature the cheese, the more of these white spherical crystals there are and the bigger they are. 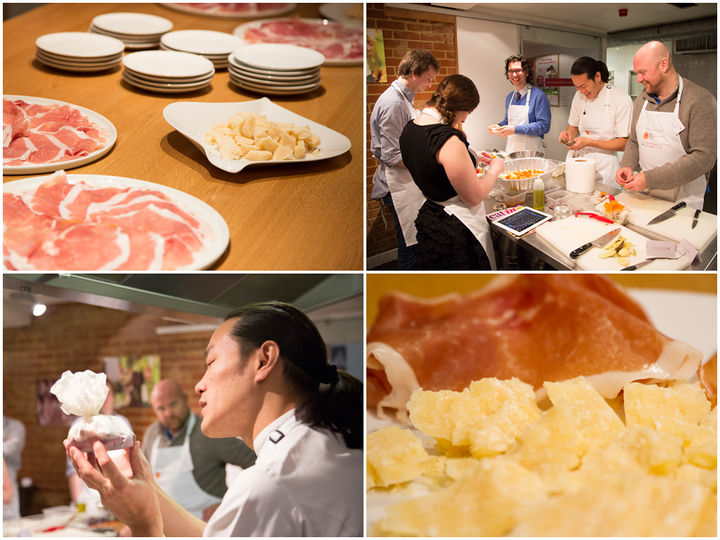 Elke Fernandez of the Parma Ham Consortium agreed that the same chemical process occurs in the ham – whatever the science, the results create a mature product in both which has a more intense flavour than its younger cousins.

We followed up the chicken with fruits baked in parchment (or en papillote), while not containing any PDO ingredients, it was to complement the amazing port wines being tasted.

Cut crunchy pears into cubes and add grapes and blackberries to make a fist-sized mound in the middle of a square of baking parchment. Add half a stick of cinnamon, a star anise, a small knob of butter, a shot of crème de cassis and a drizzle of honey. Scrunch up the corners to make a parcel and pop in an oven tray. Bake for 20 minutes at 200C (Gas 6) and serve hot with Chantilly cream (Crème Fraiche whisked with fresh vanilla seeds and a spoonful of sugar).

This went so amazingly well with the Tawny Port, a Portuguese speciality aged in oak and with its own PDO.

These ingredients need protecting, there is no doubt, and while some are not happy with having to call their produce by alternative names if they are not producing in the right area – such as the infamous Feta Cheese debate when manufacturers outside of Greece who had been producing it for many years had to drop the name Feta in favour of Feta-style or Greek-Style cheese – it is a good and very delicious thing!