Many of us know that the essential fatty acids and omega 3 found in oily fish are a key part of a well-balanced diet. It’s just really convenient that they are also absolutely delicious!

Cod remains a popular fish choice, but it’s not an oily fish, and there are many benefits to getting more of these in your diet. For that reason tinned fish like tuna and salmon are popular and versatile cupboard staples.

But what about the humble tinned sardine – and fresh ones too? And I’m thinking beyond the “on toast” method, though I admit it’s brilliant – the natural oiliness of the fish lends itself to being able to withstand cooking without drying out. Sardines, or pilchards as they are also known, go very well with fresh herbs and slightly acidic ingredients such as lemon, vinegar and onions, which cut through the oil. They’re also an absurdly simple ingredient to cook with because they require almost no effort to make utterly delicious.

So with that in mind, try one of these great sardines recipes to get more oily fish and flavour into your diet:

Similar to the brilliant Stargazey flatbread pizza that used to be served at Jamie’s Union Jacks. Roll out a thin pizza base (Jamie has a great recipe here), cover it with tomato sauce with a dash of chilli and flake over some tinned sardines. Bake at full whack and then finish with some thinly sliced red onion and a sprinkling of fresh chopped parsley.

Start by frying some sliced garlic, a little chilli, a handful of cherry tomatoes and a few capers. Cook the linguine, drain and toss with the garlic etc and a couple of sardine fillets, then a drizzle of good-quality extra virgin olive oil. Another great recipe is cooking them with fennel, saffron and raisins like Jamie does here.

Boil some new potatoes and make a dressing with natural yoghurt, a dash of red wine vinegar, salt, pepper, sliced spring onions and dill. Drain the potatoes, leave to cool slightly and then toss in the dressing. Flake in a few sardine fillets and sprinkle over some more freshly chopped dill.

Fishing often gets a bad reputation, but we’re spoilt for choice in the supermarket when it comes to watchfully sourced, good-quality canned fish. Take a little time to look for the Marine Stewardship Council mark (or similar). This indicates fish have been collected in a responsible manner, taking into account sustainability of stocks and the type of fishing method used. 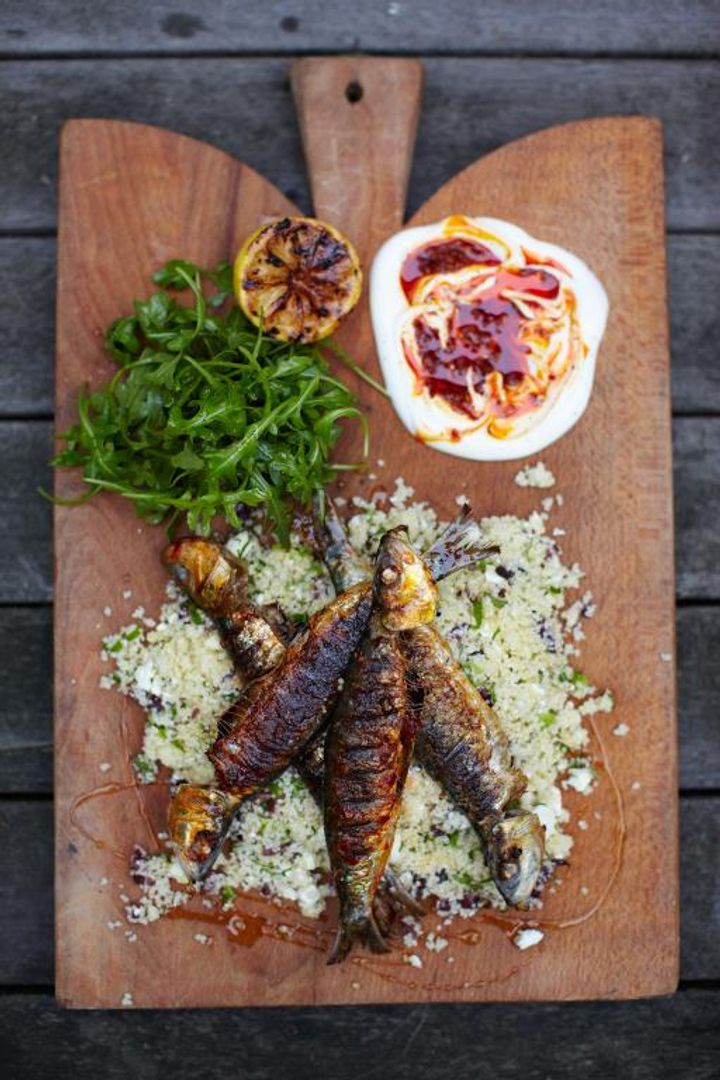 Sardines are a great carrier of flavour, especially spicy ones, and they’re great on the barbecue at absorbing the smoke and the spice. Sometimes they get overlooked because of all their little bones, but when you cook them whole, like this, you can strip out all the bones in one piece. Those two revelations together make this the ultimate way to serve them

Fish, How to, Nutrition