The great British roast is a meal enjoyed by millions, and whilst the classic version will always have its place, one of the best things about it is the endless possibility for variation.

As the lighter, brighter recipes in this month’s Jamie magazine reflect, being a little more experimental when it comes to Sunday lunch can help to drag this dish from the realm of unchanging tradition and bring it bang up to date, celebrating the diverse global food culture we’re lucky enough to be a part of.

Now that warmer weather is (hopefully!) on the horizon, it’s the perfect time to liven up our roasts, too – and the recipe feature by food writer Alice Hart in Jamie magazine’s March issue is an ideal source of inspiration.

Traditionally, sharing a roast at the end of the week is linked to Catholic and Anglican beliefs that relate to abstaining from all meat but fish on a Friday, then breaking this fast on a Sunday. However, as the magnificent recipe for salt-baked trout in Jamie magazine proves, these days a whole fish is a perfectly worthy centrepiece itself. The salt crust helps to retain moisture, making for the most amazing melt-in-your-mouth texture. It works a treat with the almond and broad bean salad that goes alongside, which injects a real lightness into the dish – great for an Easter celebration.

Yorkshire families were thought to be the first to cook a joint slowly in the oven in time for their return from church at Sunday lunchtime. What has subsequently become a deep-seated tradition of eating roast beef on a Sunday has even led to the French mockingly coining the nickname ‘rosbifs’ for the British. For the recipe in the current issue of Jamie magazine, we’re livening things up thanks to inspiration from another beef eating nation, Argentina – serving a wing of beef with their classic chimichurri sauce. A punchy blend of spring onion, oregano, parsley and lemon juice, it’s the perfect foil for beef – combined with some charred spring veg, this is a world away from the heavy traditional roasts usually associated with us ‘rosbifs’. 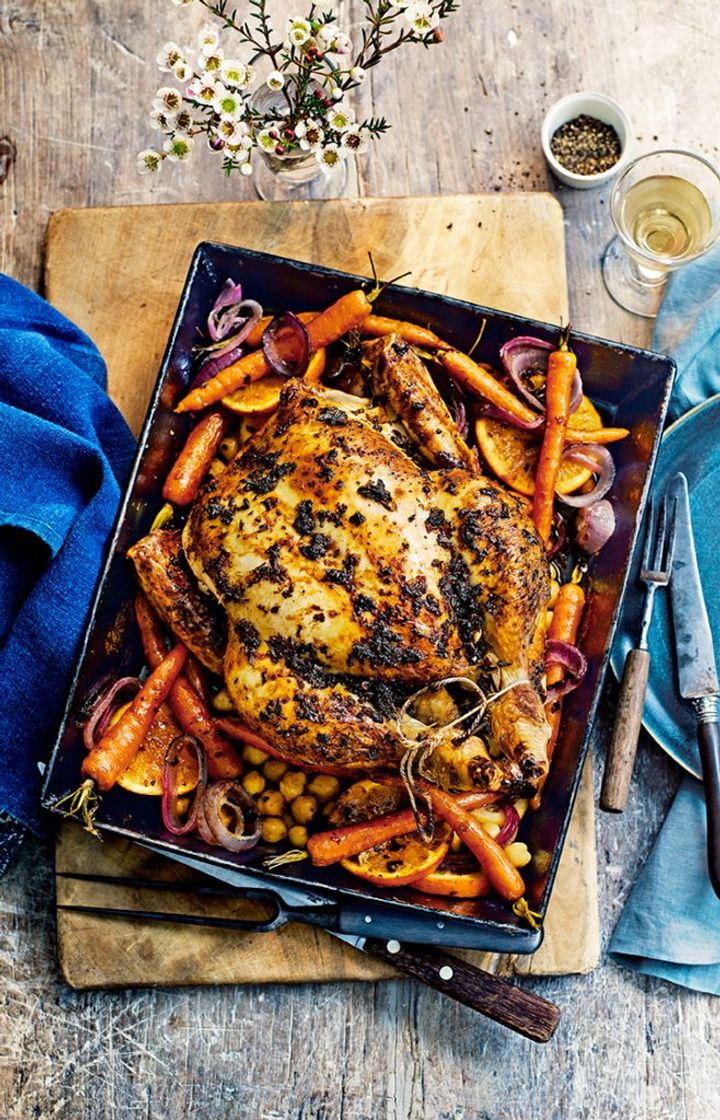 To be fair, however, a lot has changed since the roast dinner originated in medieval times, when serfs would share a spit-roast oxen on a Sunday in the fields where they’d been practicing battle. The influence of food cultures all over the world and accessibility of different ingredients means it’s never been so easy to mix it up with spices. Try rubbing chicken with jerk seasoning for a Caribbean twist, or using Moroccan-inspired flavours such as cumin, lemon and oregano roasted with chickpeas, as in the delicious recipe in this month’s Jamie magazine.

Where does this long-standing tradition of roasting meat leave vegetarians? For too long, the roast dinner has been the preserve of meat-eaters, with only disappointing nut-roasts and below-par veggie gravy offered as a substitute. However, it is absolutely possible to make a vegetarian roast match up to the traditional version. We find the key is to really show the vegetables some love and combine them with really aromatic, intense flavours. We think these Roast mejadra onions from the latest issue of Jamie magazine are the ultimate Middle-Eastern comfort food and vegetarian roast recipe, and we’re so excited to share the method with you. Stuffed with a tangle of caramelised onions, gently spiced lentils and fragrant herbs, they’re roasted until achingly sweet. 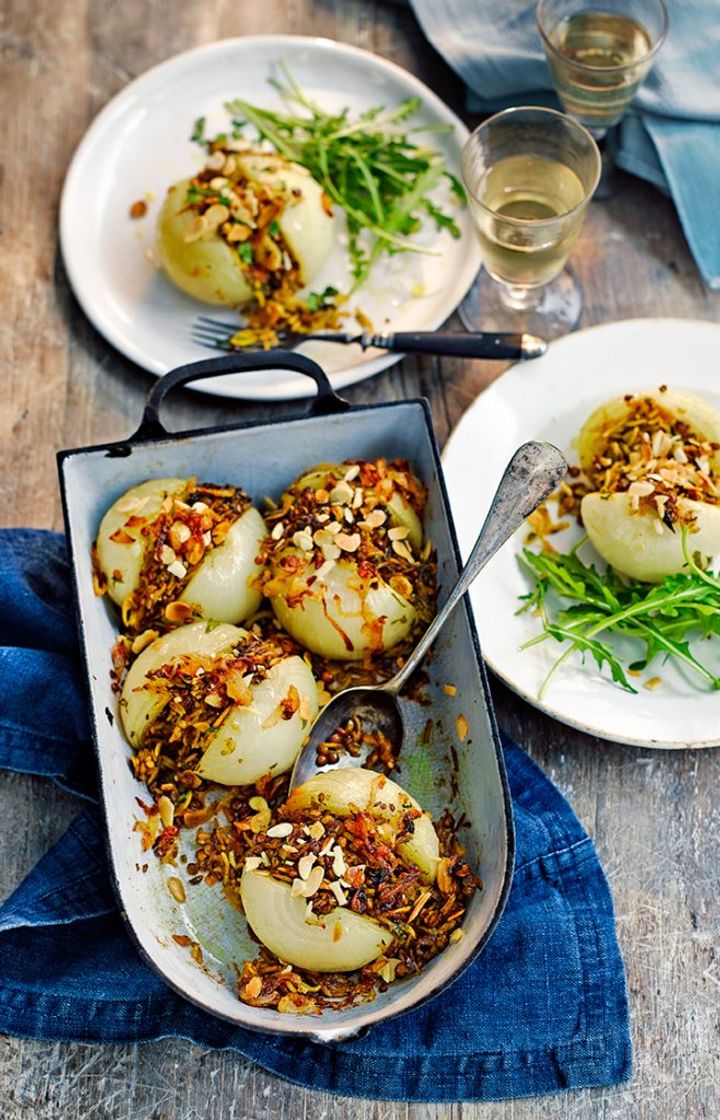 Without meat to steal the limelight, you can go bonkers with the side dishes too – try a sumptuous cauliflower cheese, loads of lemony greens or some earthy roasted beetroot.

For many, of us, Sunday dinner brings back fond memories of happy, belly-filling meals to end the weekend – it’s licking your lips at the smell of roast chicken, passing round a steaming jug of gravy, and fighting over the crispiest roast potatoes. This is a magic that it would be a shame to lose, but fewer families are finding the time to sit down together during increasingly chaotic working weeks. Breathing a bit of fresh air into the roast could be just thing to keep this great British tradition alive, and the arrival of spring is the perfect excuse to try out some new flavours and techniques.

Thanks to the lighter, brighter recipes in this month’s Jamie magazine, there’s never been a better time to reinvent your roast.