I’ve never had much of an attention span. As an imaginative kid I had more projects on than Richard Branson. I was writing a novel about a helicopter pilot, digging up half my mum’s garden, embarking on a career as a violinist and a rockstar, and vying to play for England in Euro96. Oh, and I wanted to be weatherman too.

Of all those, the only ambition that stuck was cooking. I remember inventing this, my first recipe, stood on a chair next to my mum at the hob, melting chocolate and making caramel to pour over my grandma’s famous orange shortbread.

I claimed it was my idea and named it “Yummy cake”. She didn’t have the heart to tell me it was already a well-known recipe called Millionaire’s shortbread, and was invented before I was even conceived.

I had the bug from that point onwards. That said, I was a fussy kid so for my formative years I didn’t exactly have the diet my home-economist mother envisaged. But the skills she gave me early on meant that I realised, once I had stopped rejecting Brussels, beetroot, mangoes and (inexplicably) doughnuts on principle, there was a whole world of dishes out there waiting to be tried and tested. Mostly thanks to her, I knew exactly how to cook them, too.

I say mostly because there is another person I should thank, and that is my late grandma. Firm with my fussiness but patient with my particularities, many of my earliest memories are meals at hers in a 1930s semidetached house in south London. 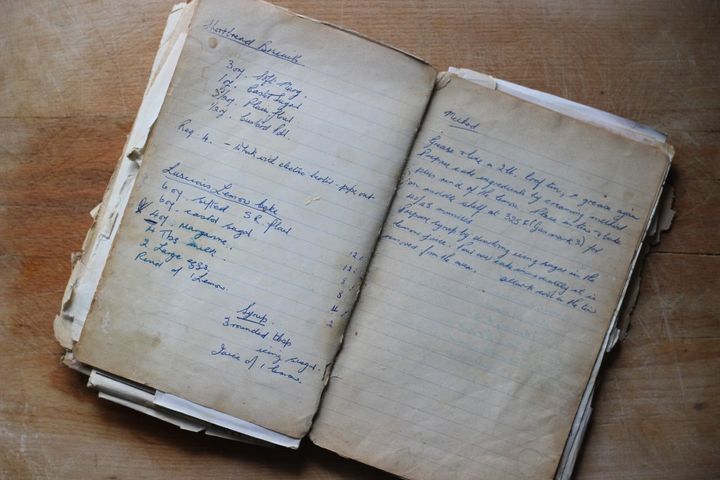 Thankfully, when my mum’s incredible knowledge of simple, quick dinners runs out, I always have my grandma’s recipe book. Admittedly, as it’s falling apart at the spine and with words slowly fading off the page, it feels as though it should only be used in a vacuum and handled with white gloves. But every now and then my mum or I dig it out and pore over the pages, infuriated by the lack of indexing but delighted by what we stumble across.

The book is a mix of her own recipes, ones cut out from Reader’s Digest and the back of suet packets, and some of unknown origin that I treat with suspicion. But still, it harks back to a time when cooking skills were alive and kicking in the younger generations; when being able to feed yourself was as vital a skill as writing.

That’s what this month on JamieOliver.com is all about – teaching people to cook and enjoy great, healthy food. And that starts at home. I can cook because my mum can cook, and she can cook because her mum could.

So in homage to my first recipe and to my Gran, I present Young Jonny’s yummy cakes, with my Grandma’s shortbread base and my messy, messy attempts at topping them. It’s great for having fun with the youngsters in the kitchen, just remember – as treats go, this is pretty much the ultimate. Indulge them maybe once a year, when you’re feeling very generous or they’ve been very, very good!

Preheat your oven to 170°C/325°F/gas 3 and grease a 33x23cm deep-sided baking tray. Combine the flour and sugar in a large bowl, then use your fingers to rub in the butter until it resembles breadcrumbs. Scatter in the ground almonds, grate in the zest of the orange and give it all a quick mix.

Tip into the greased baking tray and compact it down with your hands, then pop it in the preheated oven for 30 minutes. Don’t let it get too golden. 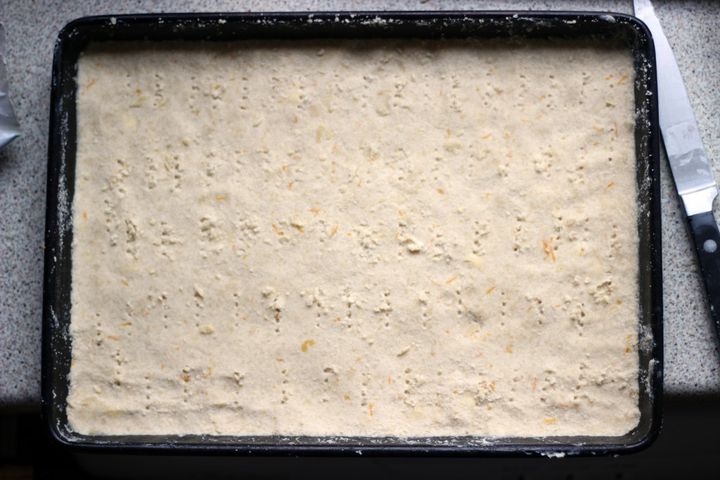 Meanwhile, pour the cream and vanilla essence into a pan and warm gently on a low heat (take care not to let it boil). Put the remaining sugar in another small saucepan with six tablespoons of water and place on a high heat. Without stirring, let it bubble away until it turns a bright golden colour, then remove from the heat and gradually add the warm cream, stirring continuously and quickly. Don’t worry if it bubbles and spits, just be careful and don’t let the kids near it! Once it’s smooth, add the salt and give it a quick stir.

Remove the shortbread from the oven and pour over the caramel. Leave to cool and then pop in the fridge for 30 minutes. 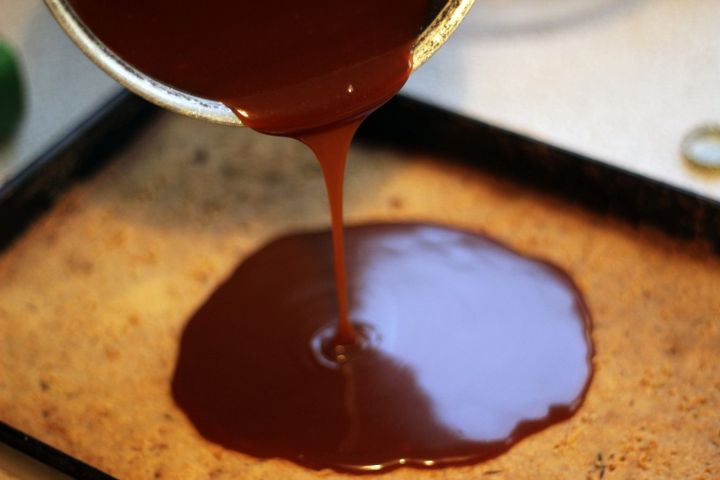 When the time’s nearly up, put a large saucepan in a medium heat, fill up to halfway with water and bring it to the boil. Add your chocolate to a glass bowl with the juice of half an orange, and place it on top on the pan. Stir until the chocolate melts, then leave aside to cool for a few minutes.

Get the shortbread out of the fridge, then pour the cooled chocolate on top. Carefully move and tip the tray around to spread the chocolate until the whole thing is coated, then put back in the fridge for another 30 minutes.

When it’s set, tip it out of the tray, cut it up and dig in!