"It's a magical place, we’re on our way there, millions of whiskies all under one roof”.

A play on the old Toys ‘R’ Us catchphrase – albeit with a very grown-up twist. You see, the Scotch Malt Whisky Society is my new favourite place. With an enthusiasm previously reserved for trips to Toys ‘R’ Us as a wee bairn, it was with a festive hop and skip that I found myself in the London branch of the Scotch Malt Whisky Society, and getting into the spirit for Burns Night.

The society is a members club that gives you access to some of the finest single malts you’ll ever get your mitts on. Members can visit any of their UK locations to chat whisky, sample the collection and attend tastings. It turns out during my visit that our esteemed leader, Jamie Oliver, is a member – he mentioned it in a paper just this December so look out for us both the next time you stop by for a wee dram!

Anyone can join the club, but that doesn’t mean you’ll find the place. Hidden away on a little side street in East London, I find a large wooden door and the name etched into the window to its left. Two buzzers: Members Room, and Office. I take my non-membership-wielding hand and buzz.

“The door’s open, just push!” comes a call. What a numpty.

I walk up the staircase, and smell a smell I haven’t smelt since trips up to Crieff, near my home town in Scotland, when I was more interested in the aforementioned Toys ‘R’ Us: peat, smoke, vanilla and warmth. This time I’m excited!

I’m introduced to Sam MacDonald, an Irish chap (scandal, I know) who sits me down in the tasting room. I’m surrounded by thousands of bottles – nearly every one the society has ever produced. How did this all come to be?

Back in the ‘70s, whisky was the opposite of the shagpile carpet, the bell bottom, the… well, you get the idea, it was uncool. Your man Philip Hills was travelling around the Highlands when he had a revelatory experience over some whisky straight from a cask. Now, I imagine Philip has a few more pals in high places than I do, because he managed to talk them into sharing the cost of a cask – that or they were all so steaming they were held at ransom (I hasten to add that there were no signs of foul play during my time at the Society).

A sidebar here for the whisky-uninitiated – a cask is where whisky goes to grow up. A big barrel, just above table height – think Donkey Kong style – where the whisky, once distilled, is left to age for a minimum of three years (otherwise it can’t be called whisky). A single cask is a lot of whisky, and barrels are reused for years and years. So to buy one off a distillery isn’t something your average Joe could do – that’s what makes the SMWS so unique.

As more casks were acquired, those sampling them wanted to know how they could be a part of it. A subscription began, with each member having access to the whiskies that were owned by the society.

Come the ‘80s, these shell-suit-wearing whisky-sipping guys and dolls decided to open it up to everyone and bought their first property, The Vaults in Leith. From then on, even though fashions and haircuts changed, the society’s love for whisky didn’t, opening a venue in London and then a second in Edinburgh.

Sam is an affable dude and certainly knew his stuff. Was a celtic man-crush developing? I won’t confirm or deny that, but I’d love to have asked a million more questions that I couldn’t muster at the time – the man knew his stuff and even turned me onto Irish Whiskey! As Sam told me, “the Irish invented whisky but the Scots first made it palatable”.

He brought over three glasses of whisky, a glass of water and a little jug of this water stuff. He talked about how to appreciate the whisky, how to look at, smell, taste and drink it. I’ll save his tips for another article, though I can share one in just a moment! 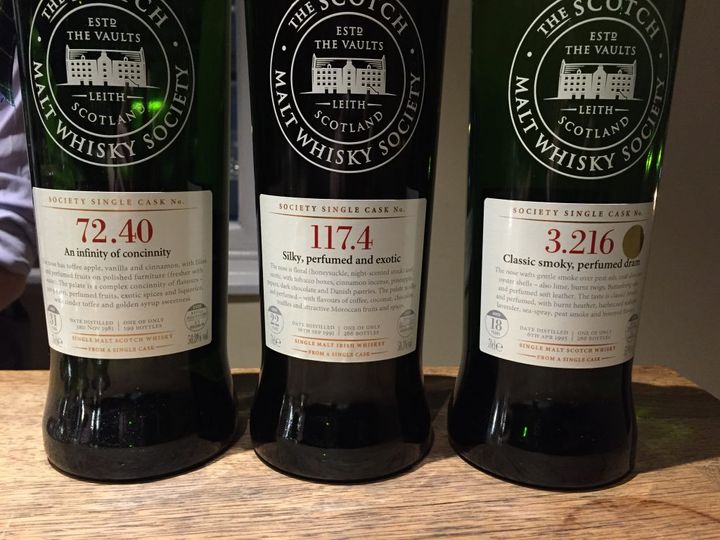 As we sat down to try three whiskies I was struck by the bottles, which had no distillery names, just numbers and tasting notes. The numbers came in two parts; the first is assigned to the distillery, then the second to the specific cask, so 72.40 will be the 72nd distillery and the 40th cask from there. Why not just put the distilleries name, I asked? Sam replied that many of the distilleries don’t bottle their own casks, sending it off to be put into blends. And those brands that do make their own single malts do so by combining a range of barrels to create their brand flavor. With a single cask malt you’re tasting that single barrel of whisky that might not be indicative of a particular brand.

All the society’s whiskies are unfiltered and straight from the cask. Any whisky you buy in the shops has been generally diluted down to 40% and filtered to remove the fatty acids that cause the whisky to become cloudy at room temperature or when cold water is added. Unfiltered whisky has a slightly different feel, it feels purer and has a certain moreishness – a dangerous proposition!

Here are the whiskies I tried, ones I would recommend to anyone who decides to become a member.

At 31 years old (my first whisky to be older than I am), this Speyside whisky was golden syrup-like in colour. Smooth and intricate, it reminded me of soft fruits, peaches, banana and sugary goodness – a complex fella and certainly one to sit down and think about!

An Irish whiskey! 22 years old and one of only 266. Aged in sherry casks, it had a dark, almost orangey glow to it. This was absolutely beautiful, so smooth with a mixture of dark chocolates and sharp fruits, while the bottle talks about Moroccan spices too. I’d be happy to drink this whisky with just about anything or nothing at all.

Distilled on 6 April 1995 and a lighter colour than I’d anticipated for an 18-year-old whisky from Bourbon barrels, this is a classic Islay whisky, with smoky peat and ash that doesn’t overpower an almost flowery perfumed finish. It’s perfect for the winter in front of the fire (or radiator for the city dwellers).

While drinking this whisky I was shown a technique I’d never seen before (and I teased you about mere paragraphs ago!). It works best with with Islay unfiltered cask-strength whisky, but take a swig of water and hold it in your mouth, then take a sip of the whisky and drink it through the water – the alcohol will separate in the water, giving you a smooth taste you’d likely never imagined with a smoky Islay. Mind blown!

My trip to the Scotch Malt Whisky Society was one I’ll savour for a while. It really opened my eyes to the world of cask whisky, and with more whiskies every month, there’s plenty to look forward to. You get what you pay for and I don’t think I’ve ever drunk anything like those fine whiskies before. If you’re a whisky lover, what better recommendation is there? 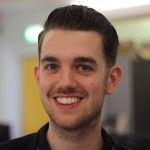 Ross is a Scotsman who, perhaps unsurprisingly, loves whisky. When he's not doing techy IT stuff for Jamie Oliver he's playing guitar and singing in his bands Cheap Meat and Echoes & Wires.