Well, that’s summer over once again. Let’s try again next year! Now that September’s here I can at least stop hoping the weather will redeem itself.

In truth, I love this month and the change of season. From my vantage point in among the vegetable beds I can see the swallows flying south and hear the robins trying out their winter songs. Each morning, the wind that always seems to be blowing across this hill now carries that distinctive autumnal chill.

There are a few crops to plant out this month: the last of the lettuce, winter spinach, chicories and various hardy salad leaves for the coming months. The heavens have done my watering for me of late, but I’m hoping for a dry spell so I can get round the plot with a hoe one last time, to save me having to hand-weed absolutely everything, which is the last big job before winter.

Otherwise, the focus is still very much on picking: native tree fruit like apples, pears and plums plus various introduced crops that need a little longer to ripen in our cooler climate. Meanwhile, the hedgerows are bursting with free food, ripe for the foraging. Blackberries, elderberries, rowans, crab apples and sloes are all easily identified. Then of course there are the wild mushrooms, which are trickier, but so rewarding once you’ve learnt how to recognise a few.

If you look at my previous posts, it’s obvious that I have a real weakness for the Solanaceae, the plant family that includes the potato, tomato and chilli. It also contains various poisonous plants, Deadly Nightshade and Henbane among them. Besides their morphology, which I find very beautiful, it’s this ambiguity that appeals. Potato tubers embody it well by themselves: poisonous when green, nutritious when not. 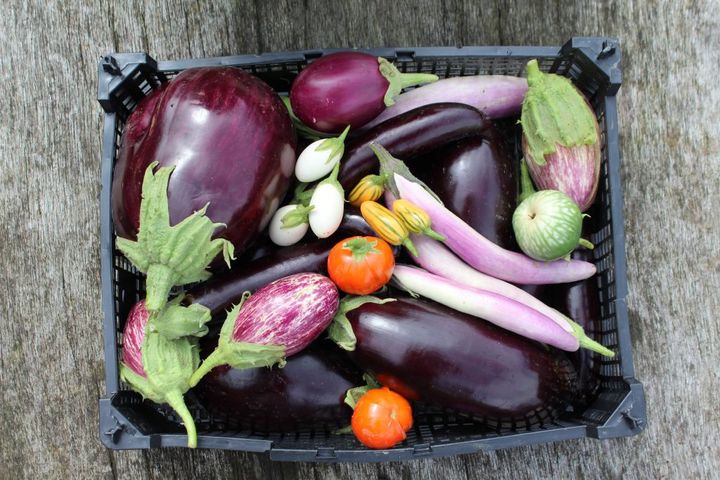 The aubergine is part of this family, too. To my mind it looks poisonous – bat winged and a bit sinister – but it ain’t. It does, however, come in many more weird and wonderful forms than pear-shaped supermarket black, as the photograph above attests. If you’ve ever wondered why it is sometimes called eggplant, take a look at the little white ovoid ones in the middle. I roasted this lot, experimentally, and have to say, they all tasted remarkably similar. I grew them for fun and in large pots under glass. I’ve not had much success outdoors, even in a good summer. For eating purposes I’d recommend ‘Moneymaker’, which is early ripening and more tolerant of cool temperatures, and ‘Black Enorma’, which is exactly what it suggests. I have to admit, I actually started harvesting aubergines in August but I’ll  shoehorn them into September because they’re too attractive to leave out.

You can make beautiful autumnal dishes from aubergines, from vegetarian lasagne to rich and hearty Italian stews. 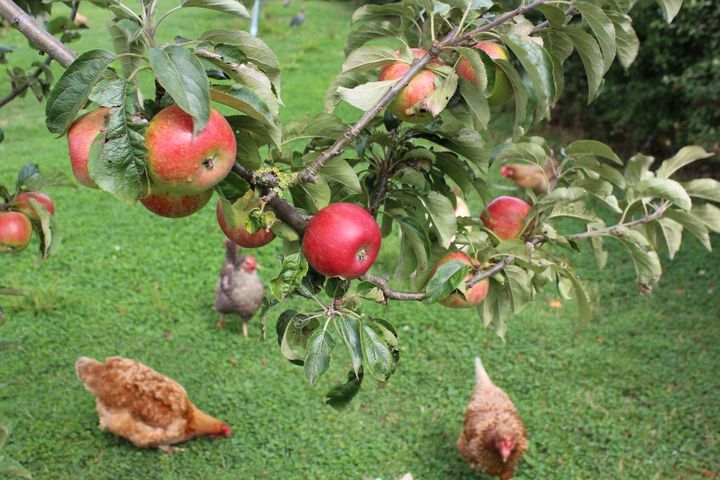 The season for both apples and pears is also underway. Apples are the more straightforward of the two: you know they’re ripe if, when you cup them in your hand, they come away easily with a gentle twist, stalk still attached. There are literally hundreds of varieties out there. If you have a tree and you’ve no idea of its name, look for a local ‘apple day’ event this autumn, take a fruit along and have an expert identify it.

Some apples keep well; others don’t. Storers, which tend to ripen later in the year, can be individually wrapped in tissue paper and placed somewhere cool and dry till needed. Non-keepers can be eaten fresh (though there’s a limit!), juiced, pressed or turned into cider. Juicing is pleasant enough, but pressed apples make a superior drink. It soon ferments, however, unless you can pasteurise it. I think making cider is the way to go. My sister, an amateur but expert brewer, whose ciders have been praised by Jamie himself, recommends Real Cidermaking on a Small Scale by Michael Pooley and John Lomax as a fine place to start.

We seem to eat far fewer pears than apples in the UK, perhaps in part because they often disappoint: seemingly going from rock-hard to grittily over-ripe without notice. Yet a decent pear at peak ripeness beats the apple for depth and complexity of flavour. Pick early and mid-season varieties when slightly under-ripe (wait for the subtle change to a lighter skin colour) and bring them indoors. Check every day for the softening round the stalk that indicates full ripeness. Leave late varieties on the tree until they part like a ripe apple. Store on slatted trays to finish ripening.

Pears (and apples) can be baked, served in crunchy salads, and over healthy buckwheat crepes. 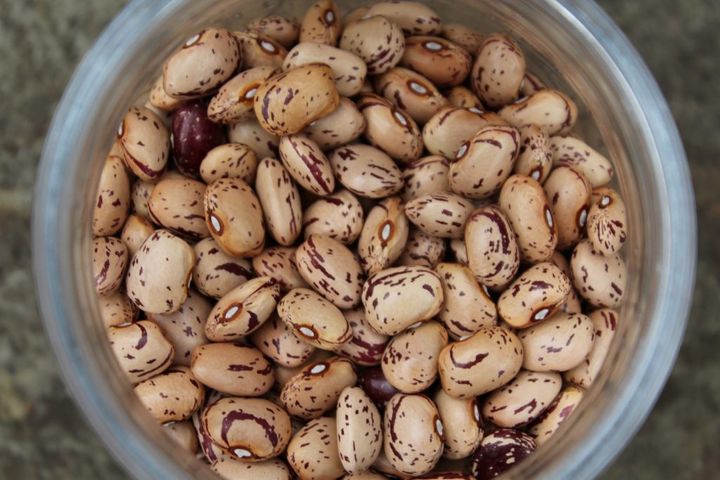 Ripe borlotti beans are easy to pick. As they mature, the pods turn a deep pink. Inside, the beans change from green to a creamy white, flecked with the same pink. The nutty flavour and creamy texture are more pronounced in fresh beans than dried, which is why they are worth growing. In any case, they are not commonly sold in the UK. If you’ve had success with French beans, try borlotti. I find actually them less hassle to grow, since there’s no need to continually pick them through the summer. Once the plants are established, they can largely be ignored till harvest time, though they will thank you for regular watering as soon as the flowers start to appear. I grow a number of different drying beans each year, partly because I find jars of them in the kitchen aesthetically pleasing.

Jools likes to use borlotti in her wholesome soup, and they’ll also go brilliantly in a classic early autumn minestrone.

There’s more to the plum than an under-ripe supermarket ‘Victoria’. This catch-all name includes close relatives the gage, damson, bullace and mirabelle, all in the genus Prunus. Between them they span the colours of the rainbow, coming in all sizes and degrees of sweetness. Their picking season runs from late July till late October. The flesh of some has a translucent quality: when ripe, they seem almost to glow. Collectively this type of fruit, with its hard central ‘stone’, is called a ‘drupe’, which is a fun word to drop when playing Scrabble. 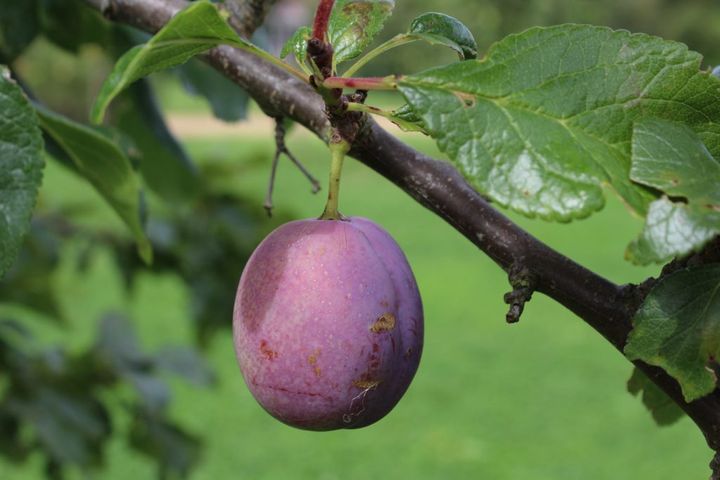 There are plums for cooking, plums for eating fresh and some suitable for both. A prune, incidentally, is just a dried plum. Gages, named after Sir William Gage, who imported some green Reine Claude plums from France in the eighteenth century, are usually sweeter. I really rate ‘Cambridge Gage’, a greengage in season right now. Damsons are smaller and tarter and are normally cooked or turned into jam or wine.  ‘Denniston’s Superb’ is hardy and good for northern regions.

Bullaces and some damsons are so eye-wateringly tart, however, that the best thing is to steep them in gin or vodka like their wild cousin the sloe – brewer’s drupes, as it were. The little yellow ‘Mirabelle’ on the other hand is a sweet gem that deserves more recognition. 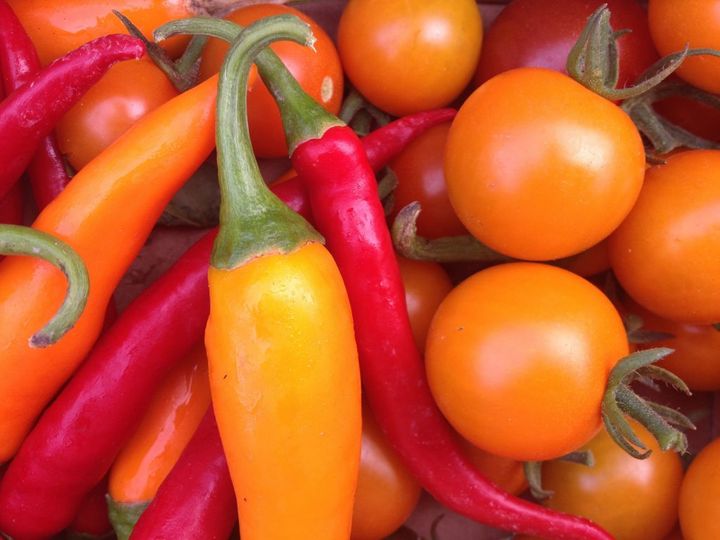 Some crops taste so much better for being home grown but to be honest, I only really grow sweet peppers for horticultural interest and out of loyalty to the Solanaceae. They take ages to ripen and don’t taste markedly better than supermarket fare. Not so with chilli peppers, though. They’re more varied in appearance, and some cultivars have a distinct fruitiness that somehow transcends their heat. The chefs at Fifteen tell me that such chillies are actually impossible to buy. ‘Fatalie’ and ‘Lemon Drop’ go down very well there. Last year I dried my own surplus then whizzed them up in a spice grinder for some superior chilli flakes.

You can preserve some of this season’s chillies and peppers in a lovely warming chutney or a very seasonally appropriate pear and chilli pickle, but you know what else is in season? Oysters, which are great served with a little fresh chilli, and prawns, which lend themselves to this beautiful salad with a chilli kick. 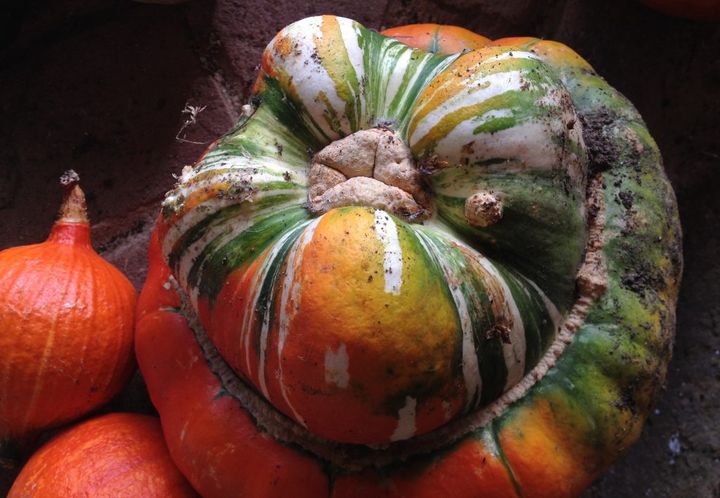 Pumpkins and winter squash are nothing if not enthusiastic and, given a half-decent summer, by August their vines will be romping all over the place. Their performance outdoors in northern districts can be sketchy (though I once saw a stunning patch on Iona). To maximise chances of success there, start them off early indoors and pot up and up till it’s safe to plant out in June. During August, fruits should start to swell. If time looks tight, restrict them to two per plant. Slip a tile or slate underneath each one to discourage rotting and cut away surrounding leaves to let the sun in. Here in the south, most ripen during September but whatever you do, harvest before the first frost. Don’t worry if you pick them a little under-ripe: they’ll continue to ripen off the vine. After cutting, skins can be ‘cured’, that is hardened to improve keeping qualities, by leaving somewhere dry and sunny for a few days. Again, they make cheery decorations for festooning the house through the winter.

Try incorporating squash into a simple pasta bake for the family, a lovely roast chicken breast for one, or even into a comforting batch of muffins! 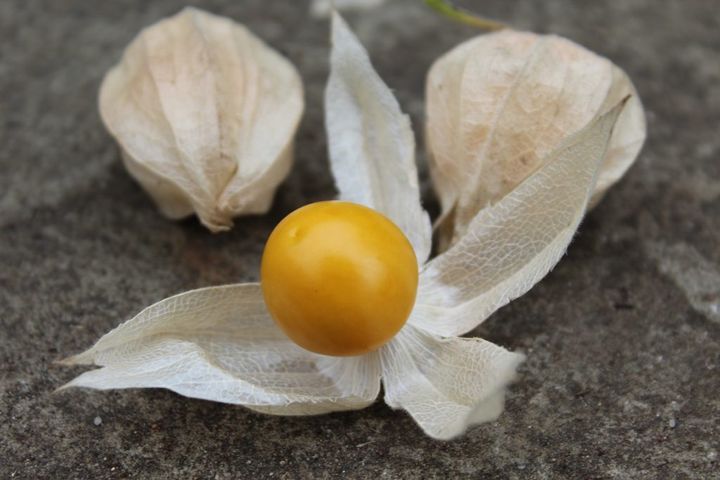 Last of all, an honourable mention must go to the Cape gooseberry, Physalis peruviana, now desperately passé as a dessert garnish but unfairly maligned, since it is a thing of beauty (it is, of course, another from that family). Each cherry-sized berry comes thoughtfully gift-wrapped in a little papery lantern. Originally part of the flower, this delicate calyx (an even better word to drop in Scrabble) grows after fertilisation to enclose and protect the fruit, instead of withering away. An early start is needed for this one: sow in February alongside your greenhouse tomatoes and either grow under cover or in a very sunny spot outdoors. Add them to fruit salads, candy them or make jam. Eat wearing an ’80s outfit of your choice.

Autumn, Fruit, How to, Vegetables