Many locations across this beautiful culinary world of ours claim to be the perfect destination for lovers of shellfish. From Portland in the US to the Shetland Islands those promising the ultimate platter of no-fuss-still-in-its-shell seafood are plentiful. Think of lobsters on a Caribbean beach or a smorgasbord of marron, Morton Bay Bugs and Yabbies in Australia. So please allow me to put this argument to bed – nobody, but nobody, does it better than Brittany. While the French are generally known for their complex and precise cuisine, they also do the simple and rustic very well too; lest we forget it is the country that originally coined the phrase ‘Fruits de Mer’.

If holidaying in Brittany in the North-western extremities of France, with the expansive coastline and ill-tempered climate, there are days when nothing other than a very long lunch will suffice. We headed for the picturesque and fish-obsessed port of Concarneau and when I say obsessed, it has a Fish Museum (Musee de la Peche) so the credentials are obvious! Time has not withered Concarneau’s charms nor has modern custom staled the infinite variety of seafood on offer, it’s a dream of place, not too Disney-fied as these walled cities often are.

Walk over the ancient ramparts to the old town, every shop in this medieval ‘high street’ belies this endless bounty from the ocean with preserved fish shops and stores flogging fish-inspired crockery, mermaids and oil-skinned old salts are found in every window display – want a lighthouse pepper-grinder? You can get it here. We were recommended by a restaurateur in the newer part of town that Le Penfret was the best, well second best to him but he was fully booked out! The restaurant sits in the middle of this tourist mecca and with traditional gypsy bands playing boisterous tunes in the adjacent square  our table was rather lively to say the least. 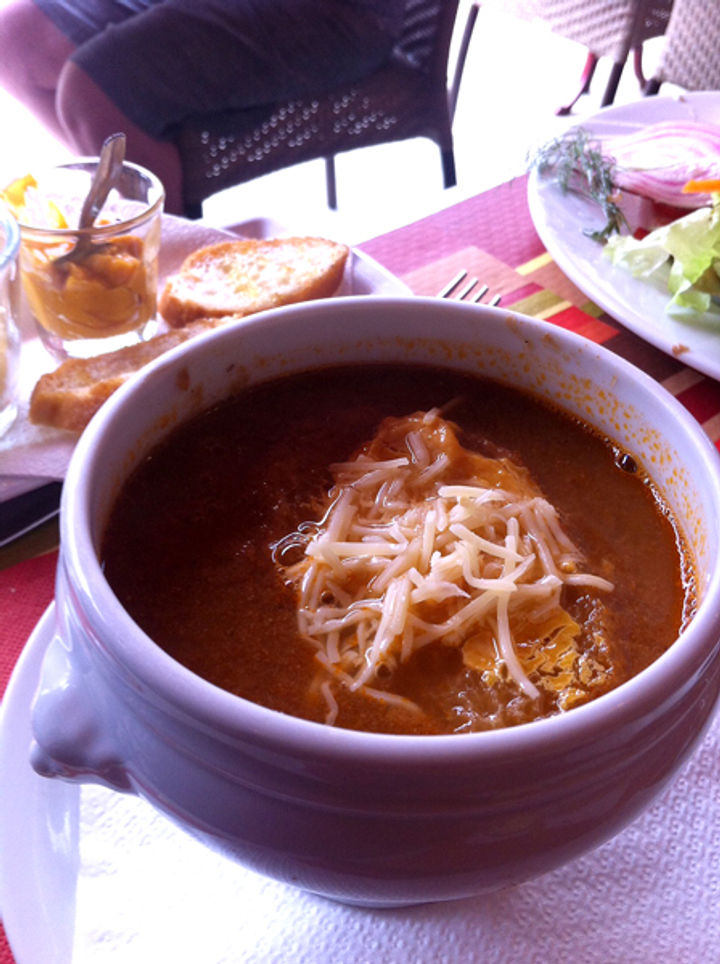 For starters Soupe de Poisson (fish soup, another Breton classic) was served with a crouton and rouille (a saffron and chilli-infused garlic mayo) with grated Emmental and a Coquille St Jacques (Scallop grilled in its shell with cheese and breadcrumbs) then came the Fruits de Mer pour deux personnes!! Why on earth did she let us order a starter? This thing was a boat, yes a boat of local shellfish, a bounty of bi-valves, a cornucopia of crustacean, a mass of molluscs……passers-by stopped to gawp and take photographs of this Eighth Wonder which shaded the burning sun from our eyes.

So where to begin? Starting smallest first we dug into the bigorneau. These are tiny little sea snails, periwinkles in black shells – the only implement to extract the sweet, salty flesh is a pin. Like most of the platter these are simply boiled in seawater, but to get to the meat you have to first take off its ‘foot’, a hard skin protecting the insides. Dipped in garlic mayonnaise these are strange and delicious little delicacies. We had about 100.

Next up local oysters (huitres), I love oysters and I have never found any coming anywhere near as good as the natives of my beloved Essex, especially those from the West Mersea Oyster Company (find them at Borough Market and have a number 3 with nothing on it) but these did come close. They needed a little shallot vinegar though, but they were sweet and not at all creamy like those monster Rock Oysters can be at this time of year. Also the French don’t care that there is no ‘R’ in the month like the Brits: this was August.

Next up Poularde (or local clam) not as sweet as the Italian Vongole and also a lot tougher to extract from their pretty shells – not the highlight by any means but again, dipped in garlic mayonnaise, so beautiful and evocative of the briny blue lapping against the old walls of our restaurant.

Whelks next – or Bulots – these are another staple of Essex seafood stalls, big old snails which if over-cooked can be rubbery and unpleasant, but if cooked right, as they were in Concarneau, then they one of the most beautiful and uncomplicated of all shellfish. Like their smaller cousins the bigorneau, you need to take the tough foot off and with a deft twist, out they come. They aren’t the prettiest once you’ve got them from their shell, but they play with your mouth – dancing with complex textures but delivering a singular punch of uncomplicated flavour. 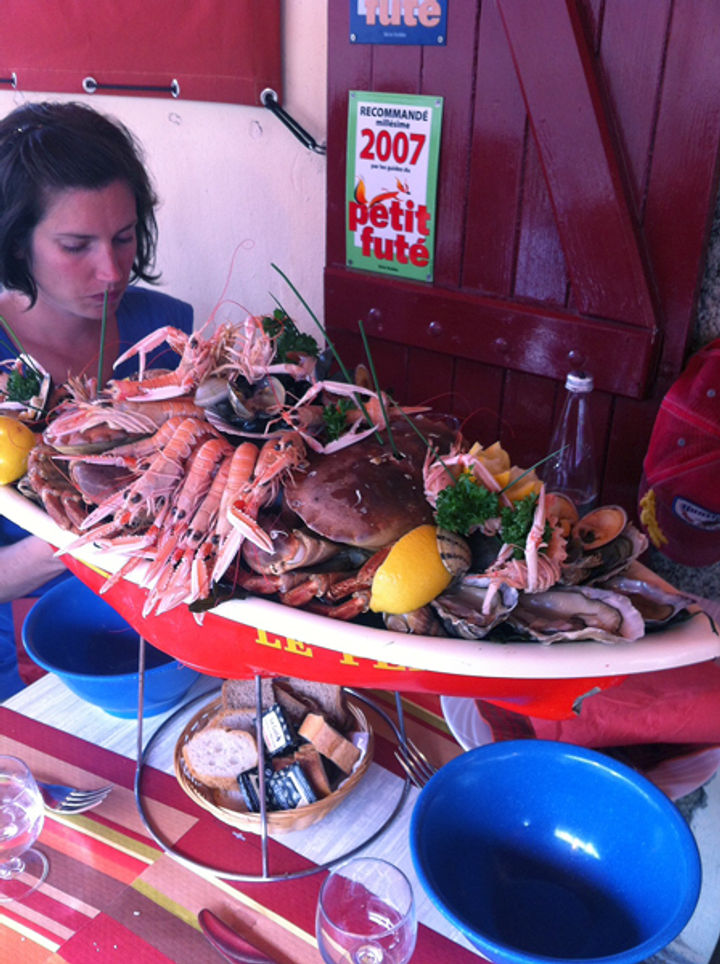 In many other self-proclaimed capitals of shellfish, you get prawns or bigger crevettes, always welcome but often unremarkable, well not here; we were given so many langoustines (shrimps with claws and spiny carapaces) that we thought they’d made a mistake (“Pour deux personnes?” “Oui Monsieur!”) there were about 50 of the these delicate coral-coloured favourites and we spent a good deal of the day getting them from their armour and dipping the tails in the mayo. Don’t bother with the claws though, way too fiddly for scant reward.

We went without lobster, that would drive the price up beyond our means, so we had the crab as our centre-piece, two of the biggest, butchest, fleshiest beasts ever to torment the small fry at the bottom of the Atlantic. We got the shell-crackers and got picking the sweet brown and delicate white meat from every nook and cranny. Glass of Muscadet in hand, we slumped, exhausted, blissfully happy and extremely full.

This was hands-on dining Brittany style, yes a touch decadent, no not to everyone’s taste but it did make me wonder just why the English aren’t on the list when it comes to such beautiful shellfish. We do have wonderful seafood restaurants, some of the top-rated in the world, but they are an oddity and a Fruits de Mer would break many people’s budgets. If we ate more of this joyous food, and looked after its precious and delicate habitats, we’d reconnect with the good things in the sea and not have to export so much it (a majority of Scotland’s langoustine end up on Spanish tables).

Jamie has developed some belting recipes for shellfish – I’ve listed some below, so get stuck in to your local (or as local as possible) seafood. Come on, get cracking! 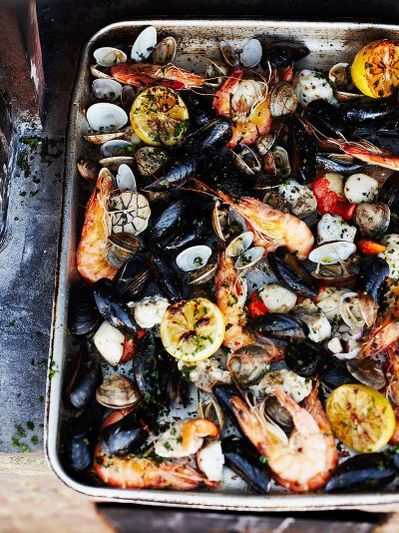 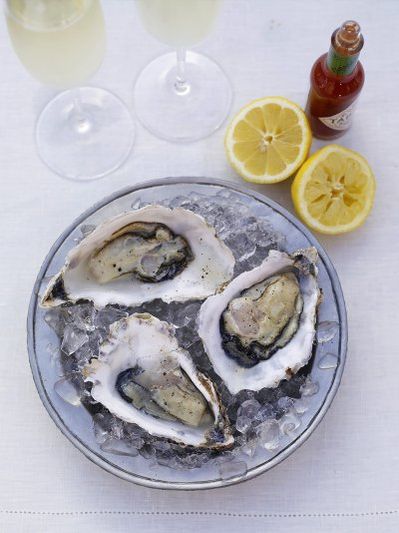 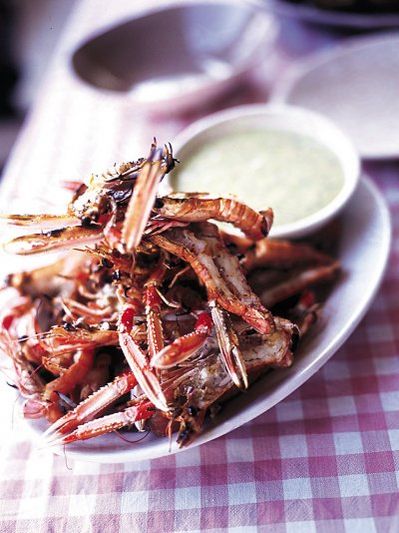