This is part three of a three-part journey into the food of Dubai, a desert city in the UAE. Read the second installment on the tradition of Dubai brunch here.

“What happens in Dubai stays in Dubai”.

That was the mantra that my fellow travellers and I decided to stick to as we said our goodbyes at Dubai airport. But we weren’t up to anything sordid, we were simply making a pact to never discuss how much we had eaten during the last five days.

The problem is, it’s my job to do just that, and given the quality of some of the food it would be an injustice not to talk about it – even if it does give me flashbacks of being so full I thought I’d never breathe normally again.

We’d just completed a food tour of Dubai, taking in everything from the aptly named High Tea in the tallest building in the world, to late-night munching at a traditional Turkish restaurant in the old town. Whatever you think about Dubai as a place, or even as a concept, you can’t deny that the food is exceptional.

Being in a desert, all its ingredients have to be flown in from around the world to feed its 2 million inhabitants. That’s not good news for the environment, but they are working on becoming self-sufficient – I can only assume with air-conditioned greenhouses or something. While they attempt to reinvent the weather, their food culture is brought to life by the cuisines and techniques that fly in with the ingredients from all over the world. In five days we ate Japanese, Vietnamese, Indian, Persian, Turkish, Italian, French, British, Spanish, Mexican and Emirati – all cooked by chefs from those places. Dubai is as multicultural as the desert surrounding it is dry.

So whether you’re in a five-star hotel, seeing an expat friend, or just pretty much passing through the airport, here are my six top tips for dining in Dubai. 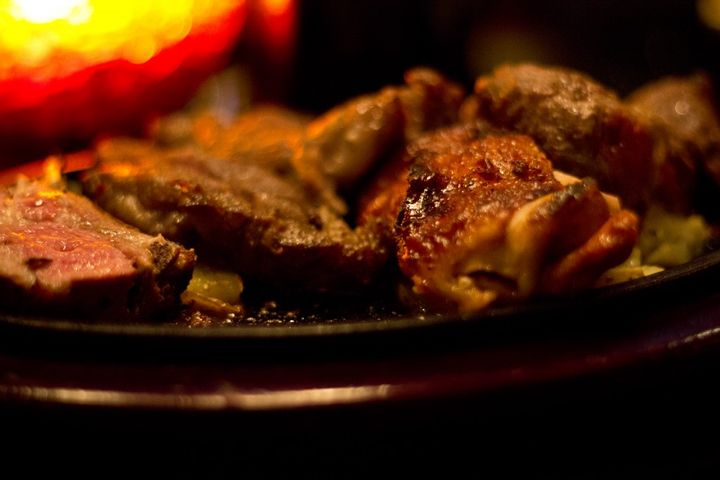 What you have to realise about Dubai is that if you want good food and a drink, you’re probably going to have to eat in a hotel. But don’t worry, the hotel restaurants in Dubai are nothing like the canteen-like horror shows of many inns around the world. They take their food seriously, as Toro Toro at Grosvenor House shows. It may pompously declare itself to be “Pan-Latin”, but they served us some of the best guacamole I’ve ever tasted, along with excellent beef empanadas. The real star, though, was the Churrasco skewer – a hot-plate platter of wagyu rib-eye, lamb chops and zesty achiote-marinated chicken – along with a Brazilian beef cut called picanha, a prized cut of steak with a huge ridge of fat on top that melts to give the meat a gorgeous, deep, fatty flavour and a soft, almost buttery texture.

If you’ve been to the famous Tayyabs in London’s Whitechapel, then you’ll know exactly what Ravi is like – rammed to the rafters with after-hours revelers, all there to dig in to the authentic and slightly rough-around-the-edges Punjabi cuisine. Ravis is loved by everyone because the flavours are big but the prices are small; a welcome revelation in Dubai. Lovingly described by locals as “organized chaos”, it’s an experience unlike anything else in the new part of the city.

Another hotel-restaurant, this one is the cream of the crop at the incredible Turkish-inspired Jumeirah Zabeel Saray, where I was staying on my trip. Serving classic French food in a pillared, chandeliered dining hall, it’s pretty special stuff – which made me feel a little underdressed in my linen and flipflops (it was hot, alright!?). Their a la carte offers some amazing dishes, but for a real taste of what the chefs can do, try their brunch menu – and read my experience of it here.

If you’re looking for some romance in the metropolis that is Dubai, then look no further than Pierchic. Found about 150 metres off the coast at the end of a long pier, it’s lit from below like a street racer but tastefully decorated with a touch of a Caribbean beach house about it. Rightly for its location, it serves beautiful seafood with Michelin-style flair – the head chef Rosalind Parsk has worked for Gordon Ramsey and Marco Pierre White in the past.  People were making lots of noise about the lobster bisque, but it was the fried halibut with white asparagus topped with a wagyu beef raviolo (seriously, how good does that sound?) that stole the show for me. 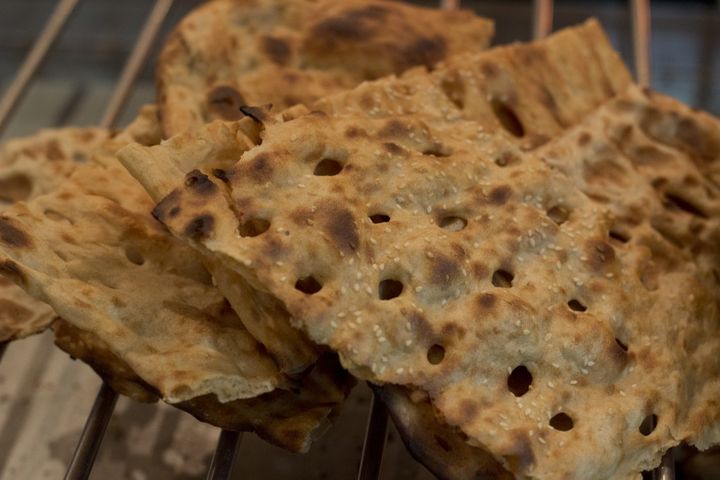 On the final night of our stay we were taken on a tour of “old Dubai” – I use quote marks because “old Dubai” is barely older than I am – but the cultures that it embraces are centuries, even millennia old. Our final stop was Abshar, a Persian restaurant loved by residents. We started with an amazing sangak – a flatbread baked on charcoal and served with goat’s cheese, nuts and sweet basil. After that we had Kashk Badmejan, a gloopy dip of slow-cooked aubergine, mint sauce and caramelised onion that was amazing scooped up with the bread. We finished with a moreish chicken dish called Mandi, where the meat is slow-cooked while hanging in a tandoor, and was served on a bed of rice cooked with zereshk – small sour berries not unlike dried cranberries. It was a true Persian experience – you can sit on the floor and eat with your hands. Being hungry and more adept with a spoon, we plumped for a table. Well it had to be here didn’t it? A taste of rustic Italy in the scorching desert sun, the Dubai branch is actually one of my favourites – and I’ve been to a few. You can enjoy cocktails on the veranda overlooking the Burj Al Arab, or tuck in to some gorgeous antipasti, pasta and traditional Italian stews and grills in the restaurant. For more details, check out my blog on the restaurant, which I paid a flying visit to on my travels, and ended up staying at until about 2am.