Every nation has a dish that defines it. The US has the burger – full of opportunity and larger than life. Japan has sushi – healthy and completely unique. England has fish and chips – old fashioned and comforting. Morocco has the tagine – steamy and fragrant. Well South Korea has bibimbap, the ultimate leftover stir-fry, served in blisteringly hot stone bowls that cook the food as you eat.

Historically, South Korea is a very poor country and meat, especially beef, is an extravagance. Bibimbap has become a staple dish because it is perfect for using up leftovers, so nothing from the bigger meals is wasted. It takes its name from the Korean for “mixed rice”, and beyond that the ingredients are up to the tastes and budget of the diner.

It’s basically made from whatever is in the fridge, usually shredded vegetables and leftover meat, but the way that South Koreans cook their food means this is a lot more exciting than it sounds. You could be using kimchi (fermented pickled vegetables) or soy and garlic-marinated beef, even dates and tofu – and whatever goes in you’ll be adding plenty of sesame oil for a nutty taste. Then the inspired bit – just before serving you crack an egg on top and mix it through. The effect is a creamy, crunchy, sweet, sour, delicious and moreish meal. 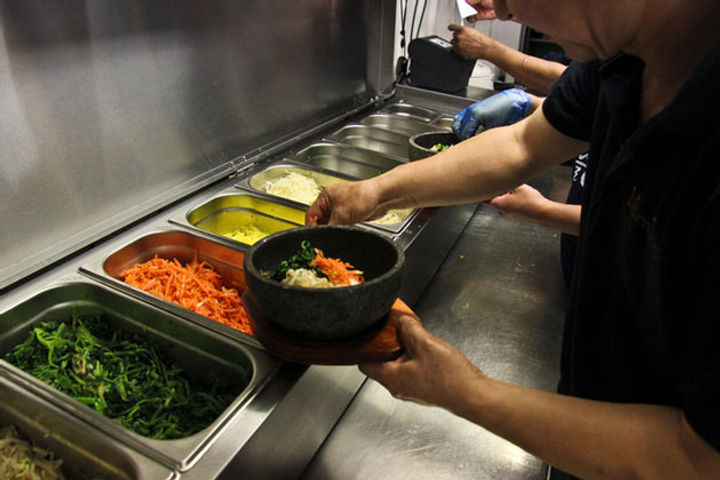 I first tried it at the aptly named Bibimbap in Soho, central London, and became addicted. So I used the World Cup as an excuse to head back there to meet the founder Young Park, who came to the UK to study engineering 20 years ago, but saw a gap open in London for Korean fast food.

“It’s kind of comfort food,” he says. “The basis of day-to-day Korean food is you have your rice dish and a soup, and lots of side vegetables. You usually have bits of these leftover after meals – so when you’re hungry is you just mix them all together. What goes in depends on the region, season and what’s in your cupboard.”

Thankfully that’s not quite how it works at the restaurant. Their bibimbaps are artfully constructed from exactly the right amount of each vegetable – mostly spinach, carrot, and beansprouts. Chefs heat the bowls then move down the line of bowls adding precise amounts and then cracking an egg on top. By far my favourite, and the one I order every time I visit, is the beef. True, it would be a decadent leftover meal in South Korea, but the excitement of receiving raw beef and egg and it cooking while you eat is magical. It’s also the meat that best suits the special sauces.

After my first meal at Young’s restaurant I spent weeks looking up where to buy stone bowls so I could recreate it on wet, windy days when the shops seem a long way away and all I have is leftovers in the fridge. I was addicted to the method – stirring it yourself, balancing all the flavours with as much gochujang (chilli sauce) as you dared, and then diving in spoon first. I’ve never quite got it as good as Young though.

“It’s the balance of the rice and vegetables that gives it the right taste. Here at Bibimbap we also have our own miso sauce. It’s not so well known, but once people taste it they tend to prefer it to the traditional gochujang sauce. It’s a family recipe – my mum’s really. But my bibimbap is better than my mum’s.” 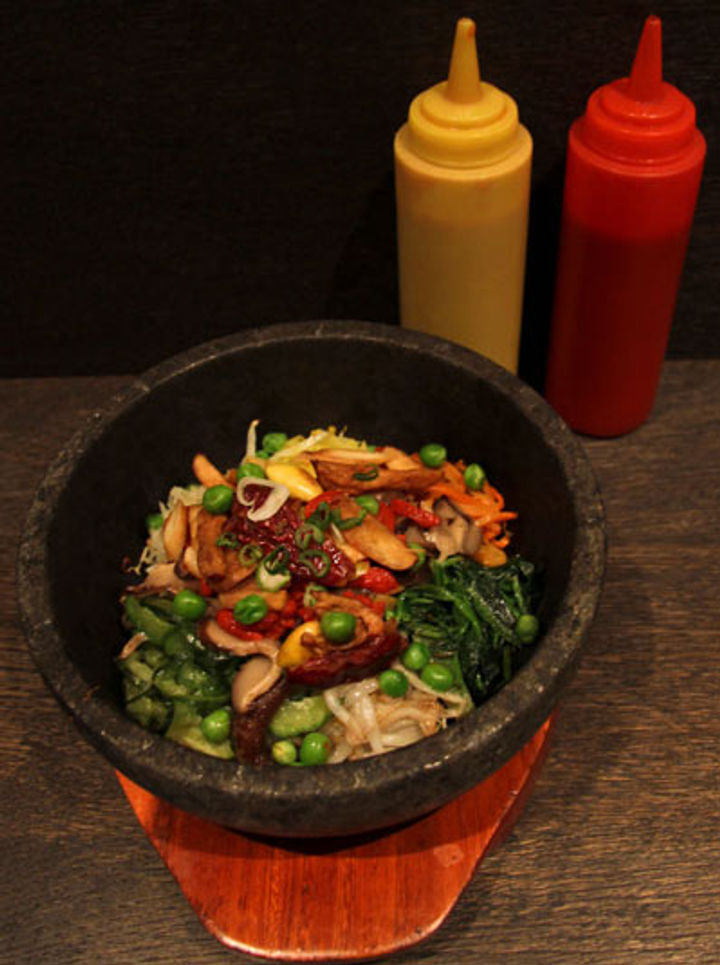 Traditionally these sauces would be made at home, but as the world modernises and speeds up, Koreans are buying their sauces from shops instead. Convenience is king even in poorer countries, but it does mean that the sauces have made it all around the – if you want to recreate Bibimbap at home you can buy the right sauces at any Korean supermarket. One Bibimbap employee, though, tells me that if you can find a vantage point above the chaos of street-level Seoul you’ll see high-rise apartments with large vats of gochujang fermenting on the balconies, so the traditions are still there for those that are attached to them. One tradition Young refuses to let go of is the making of kimchi, a fermented vegetable side that is a staple in South Korea.

“Kimchi the staple of Korean food – we have it with pretty much every meal, as I guess Western people have bread. We have an occasion where my family gets together to make it, because you’ll make a big amount that you can eat for months. I’m not expert, my wife is, but we use salt water to pack it down, then a lot of chilli, garlic, soy sauce, seasoning and vinegar – and leave it to ferment to weeks.”

They say that necessity is the mother of invention, and you see it all the time in food. Some of the most delicious meals are eaten by the poorest people in the world. South Korea seems to have a cuisine built on leftovers – the kind of thing you might throw away, they are turning into one of the most moreish dishes I’ve ever had the privilege to eat. You don’t need a stone bowl and you don’t need a recipe – just a frying pan, some sesame oil, chilli sauce and lots of shredded veg and cooked rice. Play with the flavours, play with the vegetables, add some meat for some protein, and add the egg at the last minute.

Or, if you’re ever in London, just go to Bibimbap!