It would seem that the UK is no longer a nation of tea drinkers. According to reports, coffee imports have risen by 75% since 1996, while tea imports have only increased by 25%. Maybe it’s got something to do with the dazzling array of different coffee drinks on offer…

The key to making your own plethora of coffees at home starts with a good espresso. If you don’t have a super-fandangled coffee machine, never fear – this cheat’s guide will have you hacking the coffee shop and turning out perfect espressos in no time. You can then use them as the base to build any of the below classics. 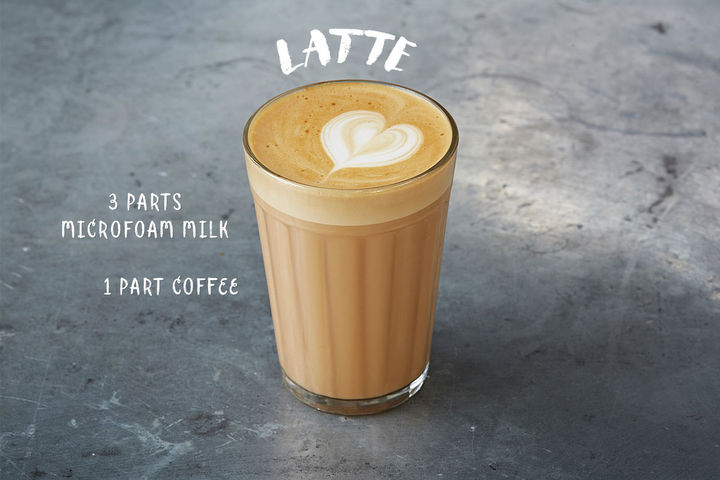 An espresso topped with steamed milk, including 1cm of microfoam.

Meaning “coffee and milk” in Italian, a caffè latte is a very milky coffee with less foam than a cappuccino (see below). It is usually made with a double shot of espresso and is most commonly served in a glass with a handle.

It is argued that the latte is Californian in origin, created in the 1950s by Lino Meiorin, one of the owners of the famous Caffe Mediterraneum in Berkeley. It was then made popular in the early 1980s by the Seattle Coffee Company (that we know today as Starbucaks). As the company’s power base spread in the 1990s, so did the popularity of the latte. The drink tends to be favoured by women, but men are also allowed to partake!

Tip: A coffee chain latte is a world away from a speciality coffee shop latte – no syrup or sugar should be needed, as the coffee will taste naturally sweet served with milk at the right temperature (60°C). Asking for it extra hot will not only burn the milk and coffee flavour, but also earn you loyalty points for extra-long eye rolling from your barista. 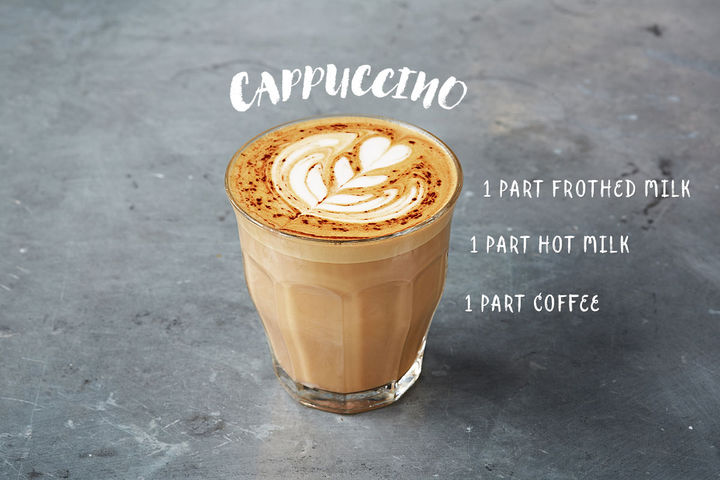 An espresso topped with steamed milk and a dense layer of microfoam 15mm thick. Garnished with a sprinkle of cocoa.

Cappuccino literally means “little cap” or “little hood” in Italian. It may be an old wives’ tale, but it is said that the Capuchin Friars Minor, an order of monks in the Catholic church, were the inspiration for the drink’s name (their shaved heads and hooded cowls were said to resemble the caramel coffee ring and white foam).

The cappuccino embodied the second wave coffee scene that dominated UK high streets from the 1990s onwards, thanks to the likes of Starbucks, Costa Coffee and Caffè Nero. A cappuccino contains less milk than a latte, made up of roughly one-third coffee, one-third silky, creamy milk, and one-third quite foamy milk. Made with single or double shots of coffee, and traditionally served in ceramics, a proper cappuccino also has a sprinkle of chocolate on top.

Tip: Adding the chocolate on top of the espresso shot before the milk creates less mess and looks amazing when pouring latte art. 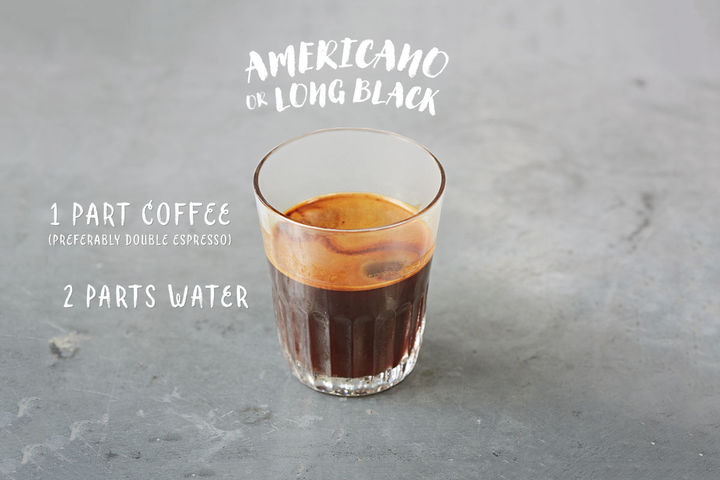 Two-thirds hot water with a double ristretto (a strong, small espresso) poured over the top.

An Americano can be either a filter coffee or a double espresso diluted with hot water. The term “caffè Americano” is simply Italian for “American coffee”. Traditionally in the States, a mug of coffee from a coffee filter pot is the common beverage, as opposed to the smaller cups enjoyed by Europeans.

The best way to make a large black coffee from an espresso is to dilute it with hot water, which is what, it is believed, American GIs did in Italy during the Second World War – hence the name Americano. The drink is popular in the US and with people who enjoy coffee from a filter machine or percolator. In New Zealand and Australia, it is known as a long black.

Tip: For an Americano or long black it is best to extract the shot of coffee on top of the hot water, as otherwise the boiling water will burn the beautiful crema. 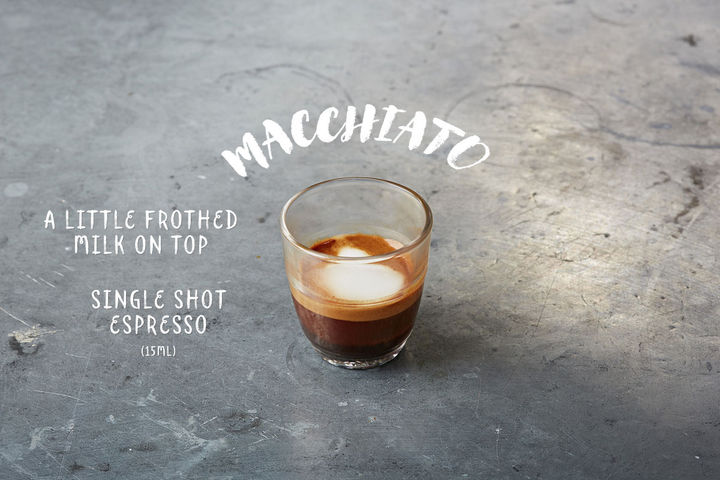 An espresso with a dash of microfoam.

15ml single shot of espresso
a little microfoam on top

Some people like a little milk with their espresso to calm the harshness of the powerful coffee hit. Macchiato, my favourite coffee, is an espresso marked with a small amount of milk (“macchiato” is the Italian word for “stained” or “spotted”). The Italian macchiato would seem to me to be identical to the Spanish cortado, however, I’m sure you’ll be able to find a number of Italians who will testify that they are very different, and vice versa.

Popular in Italy, a macchiato doesn’t necessarily have to be on the menu, as it’s part of every good coffee shop. It is served in a glass or ceramics, as either a single or double, depending on strength preference.

Tip: Again, a coffee chain macchiato is not the same as a real macchiato as it’s often more like a latte with sugar-rich add-ons. 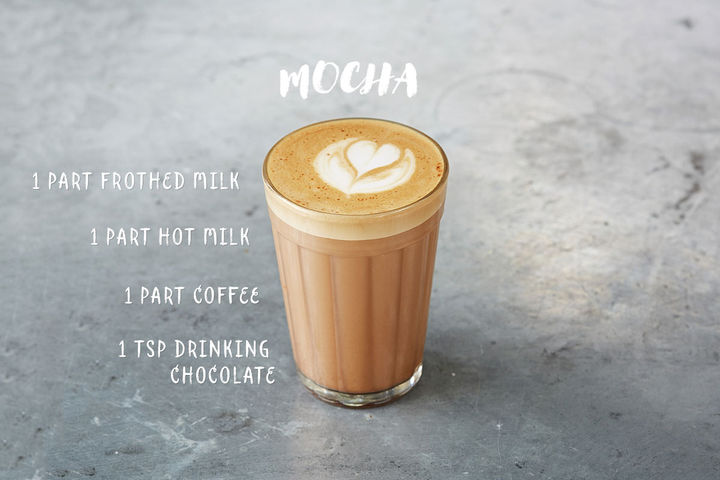 Chocolate powder added to an espresso, topped with steamed milk and garnished with a sprinkle of cocoa.

The mocha is an American invention, inspired by the Turin coffee beverage bicerin, which is espresso, drinking chocolate and whole milk served layered. In Italy or France, it is referred to as a mocha latte, not caffé mocha, as we’re more used to. A mocha is quite sweet, yet still strong in caffeine – it is basically a latte with chocolate, and traditionally served in a glass.

Tip: Bearing in mind that milk and coffee are naturally sweet together, it’s best to only use a teaspoon of chocolate in your mocha. 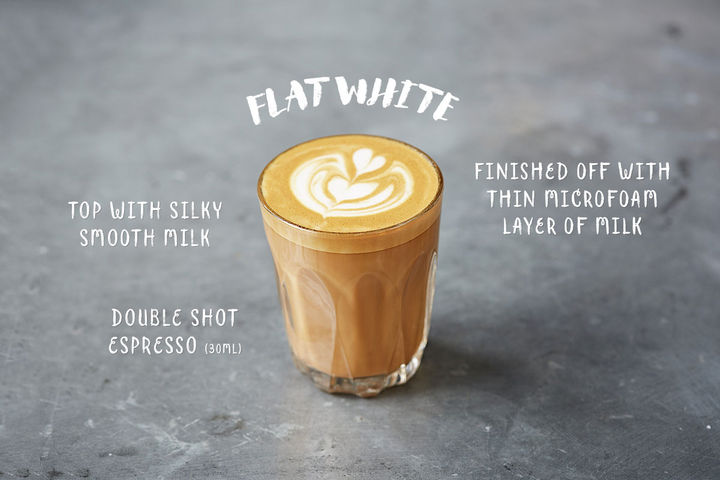 An espresso topped with steamed milk.

The flat white is the iconic coffee that seems to represent the current third wave coffee scene. The drink of the moment, it is everywhere in London – we even have our own little coffee championships at CRU Kafe making them every day. Invented in Australia in the 1970s and developed in New Zealand in the 1980s, (although both countries fight over who really invented it), the flat white is favoured not only by hipsters, coffee snobs and coffee experts, but also by people who prefer a stronger cup of joe.

Typically served in small ceramics, it is different to a cappuccino in that it has a higher coffee-to-milk ratio, and the milk is silky and textured as opposed to frothy.

Tip: There is no such thing as a large flat white – it is a flat white because it has less milk and foam to allow some of the flavours to come through, yet remain a strong cup of coffee.

Now that you know the difference between your lattes and flat whites, head over to this how to make the perfect cup of coffee feature to get your brewing skills spot-on. 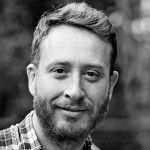 John Quilter is an entrepreneur and broadcaster with over 20 years experience as a restaurateur and chef.