In 2007 the Canadian Broadcasting Corporation ran a national poll asking viewers what they thought was the greatest Canadian invention of all time.

It seems Canadians are prolific inventors. The winner was insulin – used to treat diabetes – followed by the telephone and the light bulb. But creeping into the top 10 was an invention that few non-Canadians have heard of. It’s a simple plate of chips topped with cheese curds and gravy, and it goes by the name of poutine. It polled higher than the electron microscope, the electric oven and even the concept of standard time, coming just behind the pacemaker and the Wonderbra.

Poutine was reputedly invented in 1957 in rural French-speaking Quebec, when a diner regular asked the chef to put cheese curds on top of his chips. Despite the chef’s protest of “Ça va faire une maudite poutine!” (“It will make a damn mess!”), he obliged, and poutine was born.

But the dish wasn’t quite finished. Although the story goes that gravy was added to keep the chips warmer for longer, it’s also what turned one man’s weird food taste into a national icon. A strange idea had now become a plate of crispy chips, saturated with sweet meaty gravy and topped with squeaky cheese curds. That mix of textures makes it comforting, moreish and satisfying.

It’s now served everywhere in Canada, from the roadside diners that invented it, right up to Michelin-starred restaurants, via street food stalls and, of course, McDonald’s. It is the unofficial official dish of Canada. In fact, if they could make it look good on a flag, the maple leaf’s days might be numbered.

So, while it may look like a plate of cheesy chips that’s been run over, when done well poutine is a treat unlike any other. As with all simple dishes, the devil is in the detail, so here are our tips for the perfect poutine.

Good poutine chips need to be two things. First, they need to be fairly thin so that the gravy can filter down when it’s poured on (and because this is a dish inspired by the French). Second, they must be crispy, so that when the gravy hits they absorb it to create a sloppy but still resilient texture.

Jamie has a perfect chips recipe in his new book, Jamie’s Comfort Food that makes them come out crispy every time. To summarise it, you need to use the right potato (we think Maris Piper is best) to get crispy outsides and fluffy insides, and you need to fry them twice – once at a lower temperature to cook though, then once at a super-hot temperature to get the outside crispy. Make sure you drain them of oil really well too – there is no space for extra moisture in poutine.

Don’t let anyone tell you poutine is just cheesy chips with gravy. I’ve tried that and it’s nowhere near as good, so there are only two options for the cheese. Hopefully you can find some real cheese curd – in Canada it’s pretty easy to get hold of – but elsewhere going to an artisan cheesemonger or a farm shop that makes its own cheese could yield results. They say it’s not real poutine if you can’t hear the squeak of the cheese.

Of course, the likelihood is you won’t be able to find any. So the next best thing and the closest in texture is a really good mozzarella. You’ll need about a ball per person (this is a once-in-a-while treat, remember) torn into pieces about the size of a bottle cap. It works almost as well, and still goes just about oozy in the hot gravy. Speaking of which… 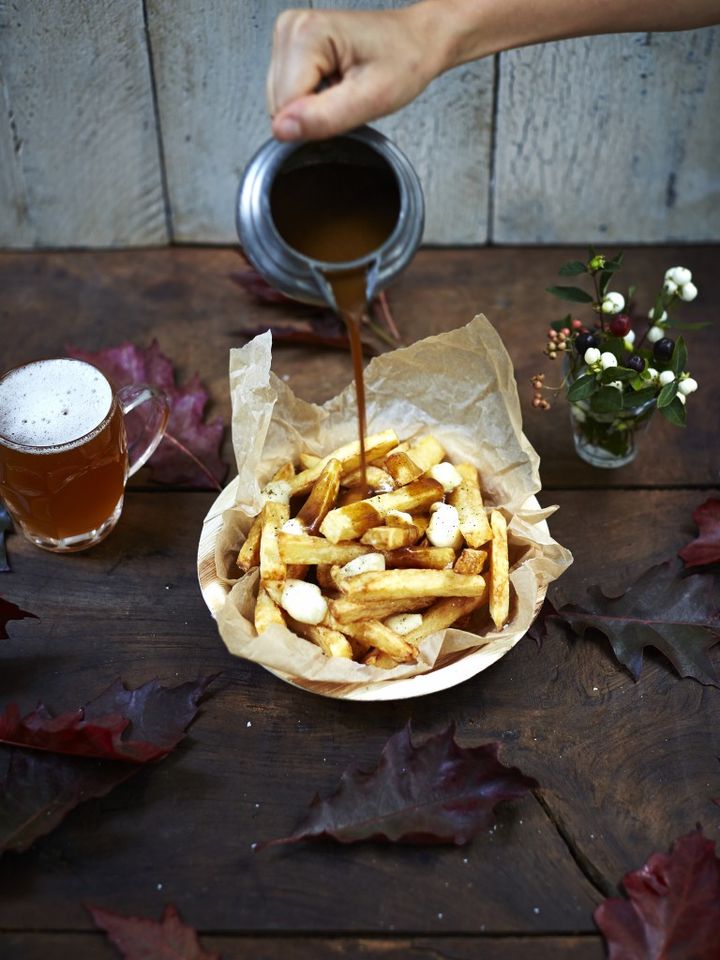 To be honest, this is the most important bit. Instant gravy is a sin at the best of times, but here it is cardinal. Invest in great gravy and you’ll be far likelier to have great poutine.

Tradition states that the gravy should be light and not too thick, so all the chips get coated in it. Most recipes call for a mix of chicken and beef stock to achieve this. That’s all well and good, but I prefer my gravy thick and sweet. A homemade chicken gravy like Jamie’s Get-ahead gravy is a great base. Obviously that’s a lot of effort to go to, but if you’ve made some for a roast you can use the leftovers.

Whatever gravy you use, I make a thicker and sweeter gravy using lots of cranberry sauce and cooking it down a little further – that way it drips luxuriously over the chips and is absolutely rammed with flavour.