Lunar New Year is all about symbolism and tradition, from the fireworks that always mark the first night of festivities, which are meant to ward off evil spirits, to the familiar ‘red packets’ signifying good fortune and prosperity - and the food is no exception.

Everything that’s eaten during the fifteen days of extended celebrations is steeped in meaning, and is part of a whole world of amazing stories and symbolic connections. With this in mind, and with a little help from some of the country’s best Chinese chefs, we’ve been on a journey of discovery into these fascinating food associations.

Fate and luck are at the heart of Lunar New Year. In China, Malaysia and Singapore, for example, the fifteenth day of celebrations is filled with romantic tradition, like Valentine’s Day in the West. On this day, single women write their telephone numbers on mandarins before throwing them into the river. Bachelors are then said to find and eat the fruit, with a sweet taste meaning good luck and a sour one bad fortune.

It’s not just singletons that are concerned with starting the coming year on the right foot. Local businesses in Chinatowns all over the U.K. will be taking part in the ‘cai qing’ or ‘plucking of the greens’. Restaurants will hang a lettuce in their doorway for the dancing lion (part of the Chinese New Year parade) to sniff out, the idea being that the higher the lion can reach to grab the lettuce, the better the dexterity of the dancers – again, it’s all about ensuring the best possible chance of success for the year ahead.

When it comes to an authentic New Year’s banquet, dumplings are a classic dim sum treat and usually kick off the feasting, as it’s said that eating them represents making wishes and praying for good luck. Their traditional shape resembles gold and silver ignots, an old currency symbolising luck and wealth.

However, there are lots of other dumpling shapes with their own associations, too. For example, Yang Sing, a much-loved restaurant in Manchester that’s been run by Cantonese chef Harry Yeung since 1977, will initiate celebrations with their signature ‘har kau bunny’ dumplings – the recipe for which we’re lucky enough to be able to share with you. These dumplings are particularly important because rabbits symbolise longevity – according to Chinese folklore, the rabbit is a companion of the Moon goddess, ‘Chang’e’, and unlocks for her the secret elixir of ever-lasting life. 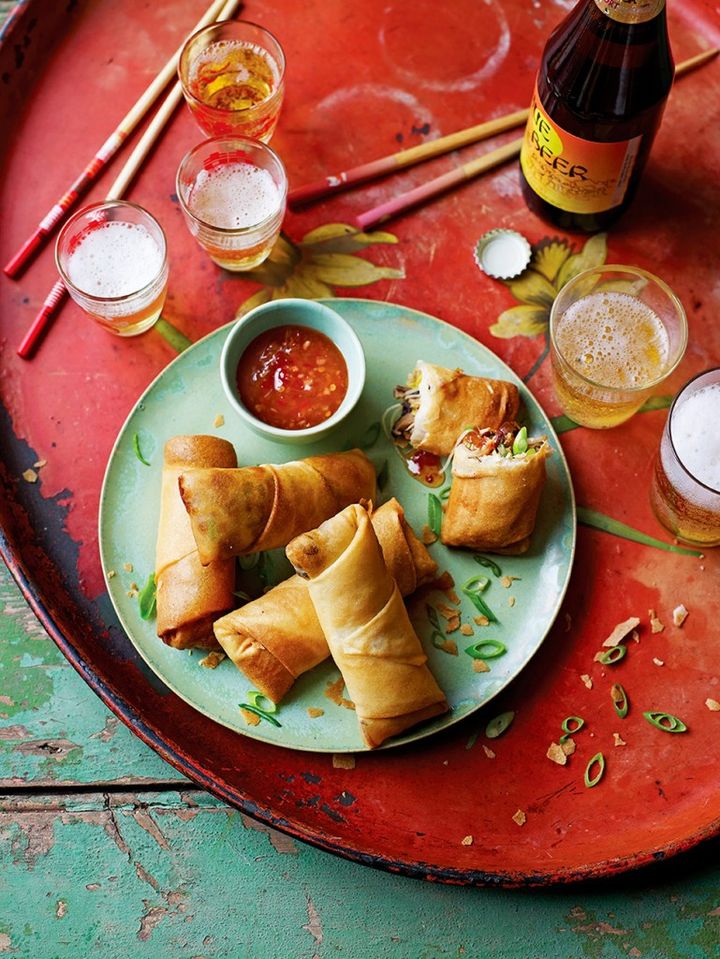 It doesn’t stop at dumplings – there are a whole host of foods eaten over Lunar New Year to ensure good fortune and a positive start. Noodles are said to represent long life, whilst spring rolls, with their shape that mirrors gold bars, are equivocal to wealth. As it’s the year of the sheep (also known as the goat or ram), eating lamb will be especially significant, too.

The way in which food for Lunar New Year is prepared also has special significance. Mr Peng, chef and proprietor of London’s Hunan, has been serving up a glorious, sizzling array of Taiwanese and Hakka dishes (with a little Cantonese and Hunan thrown in) since 1982. He explained that the steamed and braised sea bass that will form the centre of the restaurant’s Lunar New Year feast is significant because the fish is prepared with two cooking methods. The first is wok-fried in ginger over a high heat, and the second braised in a fragrant sauce. The number two itself is auspicious in Chinese culture, relating to balance and harmony (think ying and yang). Preparing the fish whole also signifies togetherness, suggesting a good start and end to the year. 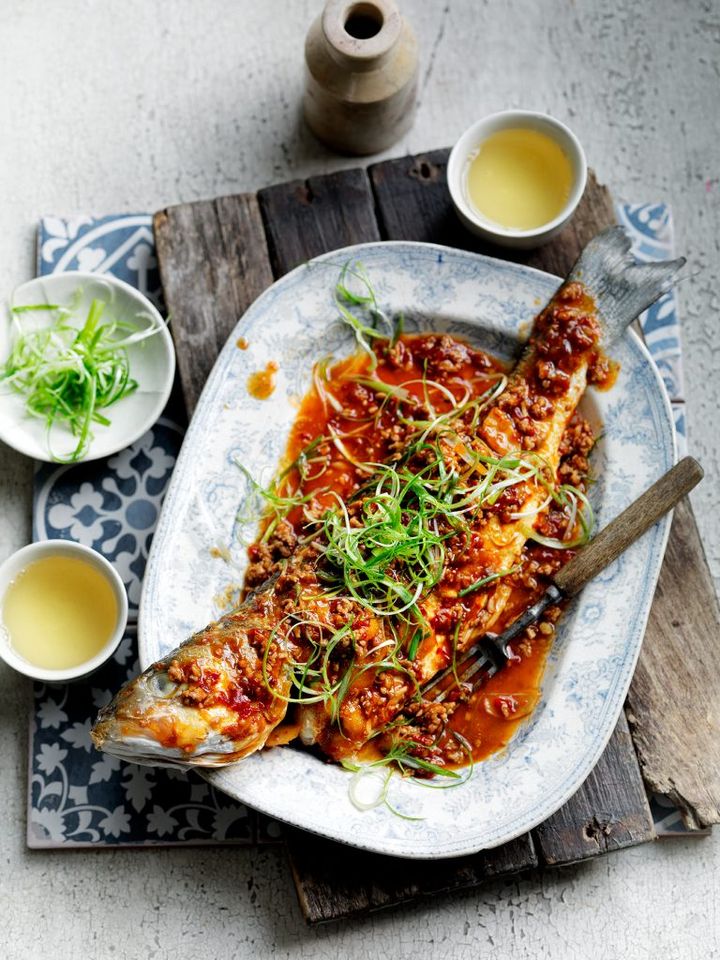 Fish itself is said to represent good fortune, with Chinese emperors often emblazoning their clothing with fish-shaped ornaments to bring about good luck. Even the way the dish is eaten is laced with meaning; it’s important not to finish the whole fish, as leaving some on the plate will bring about a surplus for the coming year.

Finally, a New Year’s banquet wouldn’t be complete without something sweet, which is said to add richness to your life for the year ahead. For third-generation chef Jeremy Pang, whose Chinese cookery school lies just a stone’s throw from the pastry shop opened by his grandfather in the 1960s, steamed custard buns are always a favourite. Made from wheat starch, coconut and glutinous rice flour, these traditional treats have a golden yellow centre, which is said to signify good luck and prosperity. Their stickiness is symbolic of the idea that families should stick together, and the round shape suggests wholeness and unity. Again, the idea of family and togetherness is really important. 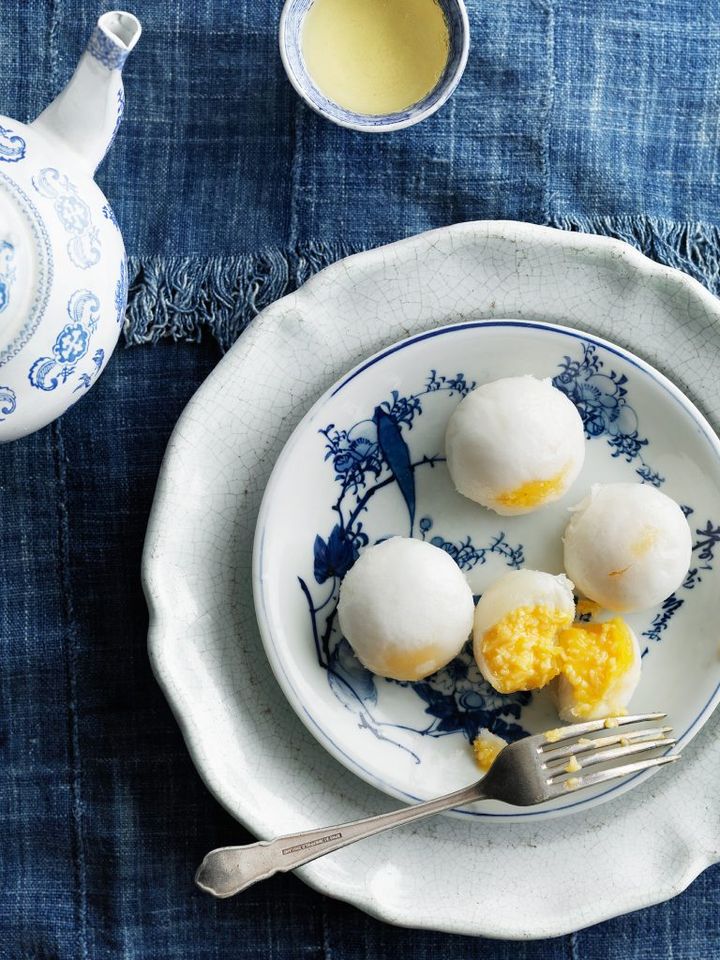 You only need to scratch the surface to realise how many hundreds of traditions and meanings there are behind Chinese dishes. If you are enjoying the LunarNew Year celebrations – and can bring yourself to wait a moment before tucking in – it’s worth considering the stories behind the food, because they might just make it taste that little bit better.