Well, the Uruguayans are definitely devoted carnivores. If Luis Suarez isn’t taking chunks out of footballers’ shoulders, it’s pretty likely he’s getting his chops around a chivito.

This monster sandwich would make a vegetarian run a mile and a vegan faint at the sight of it. It starts with steak and ham, adds bacon and a fried egg, then – inexplicably – mozzarella, tomatoes and olives.

Quite where this Italian influence comes from is a mystery given the sandwich’s history. Chivito actually means “little goat”, and the story goes that in 1946 a lady walked into a restaurant called El Mejillón in Punta del Este and ordered a goat dish she had tried while in Argentina. The owner, a certain Mr Carbonaro, didn’t have any goat meat so he had to improvise. Essentially he threw the kitchen sink at it, perhaps to disguise the complete lack of goat. Whether the lady was fooled is now irrelevant, because that day he created a national dish, and presumably a spike in heart disease cases too.

As for the Italian influence, the only explanation can be that Carbonaro was of Italian descent, which is not impossible given his surname. In fact, the Carbonaro were a secret Italian political society in the 1800s, so my hunch may well be on the money. However, most Italian chefs, the kings and queens of elegantly simple food, would sneer at the complicated dish and endless ingredients.

It is, hands down, the most ridiculous thing I have ever cooked – but I guess that’s the joy of it. It is beyond decadence but a genuine pillar of society in Uruguay. The sheer amount of ingredients means it can’t be a particularly good business model, and yet there are restaurants all over Uruguay serving them. The country’s appetite for them is only matched by their love of dulce de leche – the national football team had 39kg of the stuff confiscated on arriving in Brazil for the World Cup. I can only assume the lack of chivitos and dulce de leche is behind Suarez’s bizarre episode. He was simply ravenous, and I’m surprised he hasn’t used that excuse, because he’s tried everything else.

Anyway, in the hope that he never bites a human again, I offer him my recipe for this ultimate sandwich to fill him up. Potentially permanently.

Get your steak out of the fridge at least 30 minutes before you start cooking. Get a frying pan smoking hot over a high heat. Season the steak from a height, drizzle over a little olive oil and rub it in. Add to the pan and fry for four minutes, turning over every minute. Once done, move to a board to rest, then throw in the bacon. Cook until slightly crispy, and just turning dark. Remove them from the pan and put them on some kitchen roll to crisp up.

Next, slice your buns in half and add them flat-side down to the plan. Move them around to soak up the bacon juices, then leave to toast until lightly charred. Keep an eye on them while you thinly slice the tomatoes and olives. Remove the buns to your serving board and crack the eggs into the pan. Turn the heat down to medium and leave them to cook away, because it’s assembling time!

If you don’t want soggy buns, you need to get the order right. First tear some lettuce and lay it on top of the bun bottoms, then get your ketchup and mayo and squeeze it all into a ramekin. Mix with a teaspoon until pink, then spread as much as you want on top of the lettuce. Next, shred the ham and lay it on top, before slicing the steak into 1cm-thick slices and adding them to the sandwich. Top that with the tomatoes and olives, then tear over the mozzarella. Top with the eggs fresh from the pan, and lay over the bacon. Balance your bun lid on top, and then weep with joy… or serve with sweet potato chips. 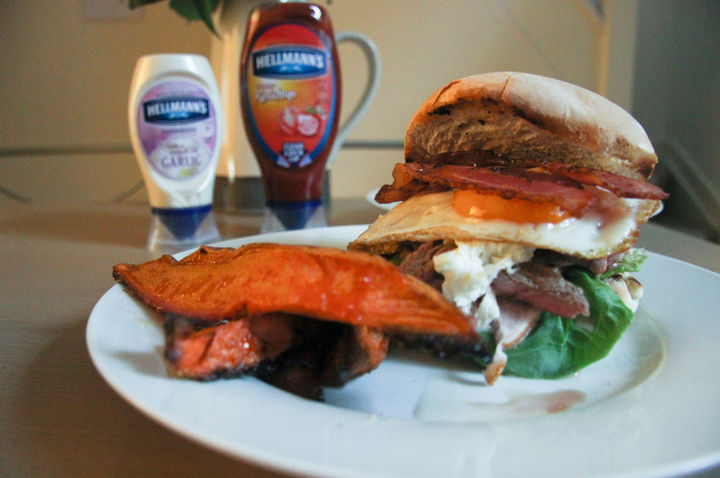