We thought long and hard about what we’d pick for America as part of our Foodie World Cup. The choice was downright overwhelming, given the country’s size and diversity, but seeing as for the last two weeks I’ve been eating and drinking my way through New York City, I decided I’d pick something from a food culture I’ve loved in the city that never sleeps.

Although the monopoly of the fast-food industry in the US is no joke (seriously, the sizes of the fizzy drinks…), the most memorable experiences I’ve had out here have all been meals. New York knows how to do food. In the blinding sun of mid-June on the East Coast, I’ve enjoyed some of the finest ‘”bad-food-done-right” I’ve ever had the pleasure of devouring: proper mac n’ cheese; biscuits (oh, the biscuits) and gravy; tacos; one-dollar pizza slices; gargantuan burgers; mouth-watering ramen; plate-sized omelettes; warm-from-the-fryer doughnuts; teetering towers of fluffy pancakes; and, of course, a few hundred bottomless cups of filter coffee.

However, what I was excited for above all that – the main reason, in fact, that I chose New York for my first solo trip to the States – is the Jewish food culture that thrives here. With great import placed on red meat, fish, potato, rye and salt, it could never be called the healthiest food in the world, but it could be considered the most comforting. The American deli culture is something I’ve been looking forward to experiencing for as long as I can remember, and this desire was always going to lead me to the world-famous Katz’s Delicatessen – and to their pastrami. 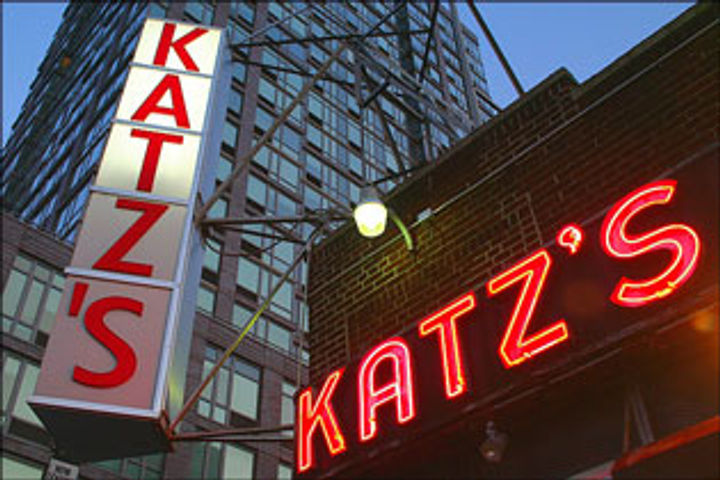 As one of the most well-loved establishments in New York, Katz’s Deli was an integral part of the immigrant population of Manhattan’s Lower East Side in the early 20th century. Their corned beef and pastrami are considered the best in the city, and over its lifetime of 125 years almost every famous face you can imagine – as well as millions upon millions of tourists – have dined there. The quality remains unmatched so, unlike most New York tourist traps, city-dwellers continue to dine at Katz’s.

I’ve written before, in a piece about food and coffee pairings, about my love of the Reuben sandwich – the heavenly piling of hot pastrami, sauerkraut, Swiss cheese and Russian dressing into two slices of soft rye bread. Given that I’ve never found a great Reuben in the UK, I’ve only ever eaten imitations of the classic. You can understand my excitement, then, at finally sitting down at one of the most famous gastronomic institutions in New York – as well as the location of “that scene” in When Harry Met Sally.

The origins of the Reuben sandwich are (surprise, surprise) contested, but it is universally acknowledged as an American invention. There are also several variations, but no matter what details are changed, the Reuben is a hefty undertaking at the best of times. Katz’s version, however, is nothing short of a monster. Let’s go through the five ingredients:

The meat
The “basic” Reuben is made with corned beef, usually from brisket, but at Katz’s you can pay an extra dollar to have yours with pastrami. You may wrinkle your nose at the mere mention of corned beef, but it’s only in the UK that the name is doomed to inspire thoughts of canned beef between forlorn-looking slices of white bread. The “corning” refers to the preparation with large grains or “corns” of salt (not with corn kernels, as I bizarrely believed growing up). The end product is what I’m more likely to call hot salt beef – that delightfully moist fall-away meat. Pastrami is very similar to corned beef, but is rubbed with spices and smoked by Katz’s themselves in a long and near-inimitable process – well worth the extra dollar.

The sauerkraut
I’ve always considered myself to have a very open-minded attitude to food, but as a concept, I’ve never found the idea of shredded pickled cabbage all that appetising (even if it is, of course, absolutely delicious). In fact, I’ve spent my entire life somewhat surprised at how great it can be.

It doesn’t really matter the quality of sauerkraut you use for your own cooking (pro tip: stew with a cinnamon stick, bay leaves and peppercorns, drain and use as a base layer for a shepherd’s pie), as even the cheap jars from delicatessens are pretty damn good. However, great sauerkraut is always homemade, just like Katz’s. The bitterness of it makes sauerkraut an essential part of the classic Reuben.

The cheese
Swiss cheese is a big deal in New York – every deli counter offers it as a sandwich ingredient. It’s not a strong flavour, but it’s creamy and melts well over the hot beef, mixing perfectly with…

The dressing
Russian dressing is a funny thing. It’s essentially no more than a mix of tomato and mayonnaise – which is also a good base for a cheat’s Marie Rose sauce, by the by – but with the addition of finely-chopped onion and herbs, as well as a few different spices. It’s quite sweet on its own, but with the bitterness of the sauerkraut, mellowness of the cheese and strong saltiness of the beef, it’s perfect.

The bread
For many people, “rye” means heavy German pumpernickel – which, frankly, I don’t mind one bit – but in the US, rye is usually quite soft bread, made with both rye flour and traditional strong white bread flour. This gives is a glorious but subtle strength of flavour and texture in comparison to 100% wheat. 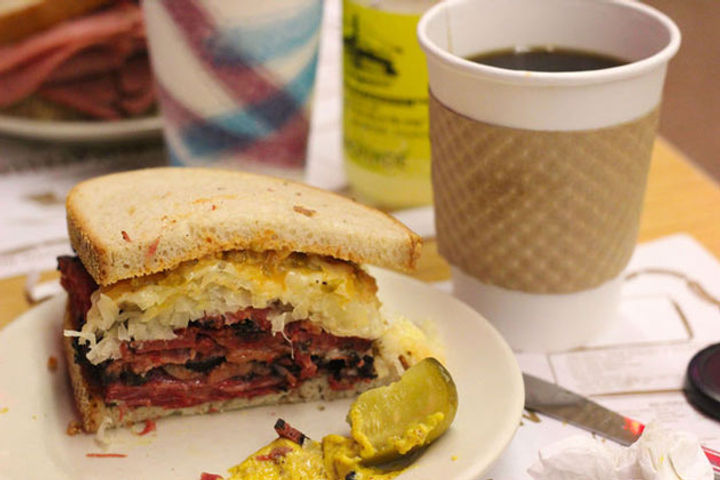 Secret weapons
There are two things I love about delicatessens in New York; one, there’s the coffee, and two, the fact that pickles are mandatory. Upon sitting down at Katz’s and looking over the magnificent menu, a huge plate of sliced homemade pickles was set down as an appetiser, which we hungrily munched while we ordered.

I will say again, too, that the combination of this kind of food with coffee is a joy unlike anything else. The Reuben-and-coffee combination topped my list of the best food-and-coffee matches, and I’m pleased to say that, after finally experiencing it in the land where the dish was born, it’s every bit as good as I have always hoped it would be.