Words and recipe by Ren Behan

British asparagus season is back. Its time is short, officially running from April 23rd – June 21st, so now is the best time to enjoy those beautiful fresh stalks.

Asparagus is not only an extremely versatile spring vegetable, it’s also full of valuable nutrients. Asparagus contains vitamin A, folic acid and fibre, all of which are thought to help prevent some forms of cancer. Eating fresh asparagus will also provide you with high levels of potassium, iron, and rutin, which when combined with vitamin C can give your immune system a natural boost.

Asparagus is incredibly simple to cook. In fact, you can even eat it raw. But whatever you do, don’t overcook it. A minute or two dipped in boiling water will be enough to soften it, or you can steam it, roast it, or fry it in a griddle pan.

If you are using asparagus as an ingredient within a dish, such as an asparagus risotto or spring vegetable soup, you can simply add it straight in, towards the end of the cooking time. I absolutely love asparagus steamed and lightly buttered, but another of my favourite ways of eating it is to griddle or roast the delicate spears with a little olive oil, garlic and grated lemon zest, just for ten or so minutes. 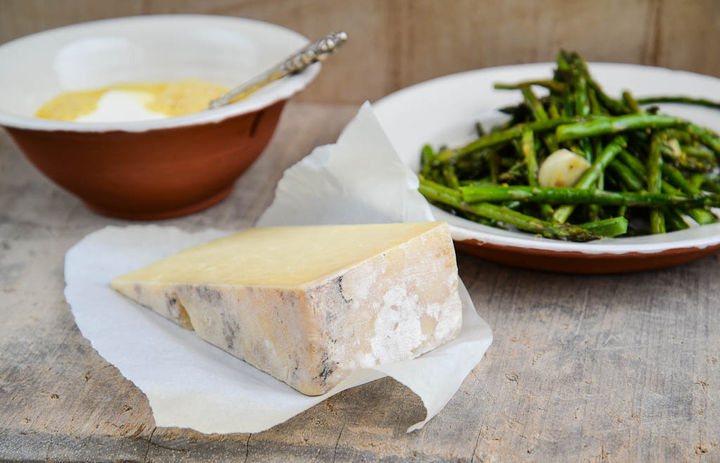 My first taste of British asparagus out and about this year was at a charity supper at Fifteen in London, hosted by Jamie, to celebrate the success of a very unusual experiment involving some white truffles and cheese maker Tom Calver’s Westcombe Cheddar. On the night, Executive Chef Jon Rotheram and his brilliant team of apprentice chefs created a seasonal menu, filled to the brim with British produce – such as Wye Valley asparagus, nettles, wild garlic and veal – all paired with Tom’s Westcombe Truffle Cheddar. The Cheddar itself stood up incredibly well to the truffles. The stand-out course of the night for me was the pairing of the mature cheddar with British asparagus and a very light mushroom mayonnaise.

The following day, inspired by Jon’s beautiful British seasonal menu, I set to work on this British asparagus and Westcombe Cheddar tart, which I served for lunch alongside a baby leaf spinach and beetroot salad. Spring perfection!

Westcombe Cheddar is unpasteurised, mature cheddar, holding both European PDO status and the “Artisan Somerset Cheddar” designation from Slow Food. It has a firm texture, is slightly nutty and can be easily crumbled. I found a block at Jamie’s Deli in St Albans, but any strong, crumbly Cheddar can work.

Preheat the oven to 180ºC/350ºF/gas 4. Wash the asparagus spears then snap away and discard any woody ends. Place in a baking tray, drizzle with olive oil, add the garlic cloves and lemon zest, and use your hands to coat the spears.

Bake the prepared asparagus and the tart shell in the oven alongside each other for 10 minutes.

Crack the eggs into a bowl, whisk in the cream and the grated Cheddar, then season with a little sea salt and pepper.

Take the tart shell out of the oven again and place the roasted asparagus into the tart. Pour the egg and Cheddar cheese mixture evenly over the top of the asparagus. 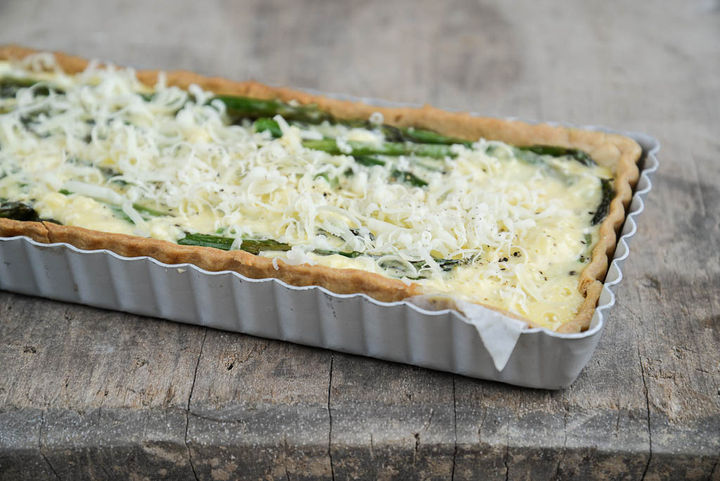 Bake the filled tart for a further 15 minutes, until it is bubbling and golden. Leave to cool slightly and serve in slices.