St George’s Day officially marks the start of the British asparagus season. The season is short, usually just eight weeks long, during which British growers guarantee some of the freshest asparagus around. In some cases, particularly in East Anglia, the asparagus on the shelf might even have been picked just a few hours earlier. So, it’s a case of keeping your eyes open and grabbing some UK-grown asparagus while you can. Look out, too, for asparagus festivals and asparagus recipes galore.

British asparagus is usually green, but there are also white (which are force-grown underground) and purple varieties, so always check the label of origin. The spears should be straight and firm. At the start of the season you’ll notice that the spears might be thinner, so just wash and eat or cook as they are. Towards the end of the season the spears will be a bit chunkier and will need a few minutes longer to cook. You might need to snap off the woodier ends.

Once you’ve got your hands on some brilliant-green spears, the golden rule is – don’t overcook them! You can eat asparagus raw, so that should give you an indication as to how short the cooking time need be.

Asparagus is incredibly simple to cook. Bring a big pan of water to the boil and plunge the asparagus spears in for just three-to-four minutes. If your spears are thicker, they might need up to five minutes. Drain them once cooked and serve as soon as possible. To keep that bright green colour, you can pop them into some iced water after they’ve been cooked. If you prefer, you can steam asparagus for a similar length of time as when boiling.

How about roasting your asparagus? Heat the oven to around 200 degrees Celsius, take a large baking tray, drizzle the asparagus with a little olive oil and roast for fifteen minutes. For a little extra flavour, try adding a couple of whole cloves of garlic to the tin and grate over a little lemon zest.

You can griddle asparagus, too, with olive oil, lemon and parmesan if you fancy it, or just plain, so delicious. 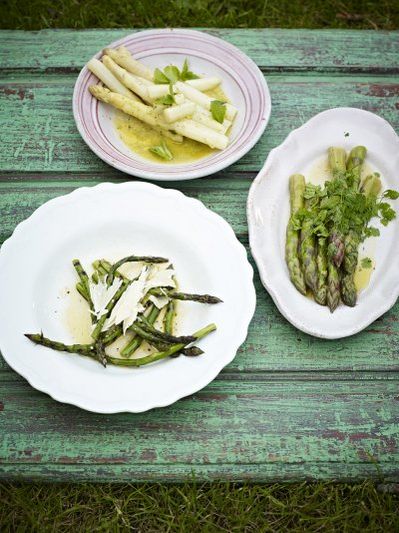 Classic asparagus accompaniments include melted butter, Hollandaise sauce and poached eggs, or you can use the asparagus as dipping sticks for softly boiled eggs. I love adding asparagus to my salads. Try lightly boiling, steaming or griddling the spears and serving them with some Mozzarella cheese, fresh tomatoes and a softly poached egg. Spring pasta dishes can easily be brightened up with some fresh asparagus, or try Jamie’s Asparagus, mint and lemon risotto.

Learn all about asparagus at the Vegepedia. However you eat yours, be sure to make the most of the short British season whilst it’s here.