Is there any greater male cliché than two men stood at the barbecue, beer in one hand and tongs in the other? Sure, in the UK one of them probably has an umbrella too, but it’s a scene that is repeated around the world.

And because few women I know want to spend their summer huddled around an even more powerful heat source – they have too much sense for that – it’s a cliché that will endure. The only part of that image that needs to change is the beer men are drinking.

I’m not even being snobby this time; it’s not about bashing bad beer. It’s just that lager – whether it’s the critically lauded Tipopils or the stubby bottles from Tesco – can’t stand up to barbecued meat. Taste is relative and, faced with a sticky barbecue sauce, within two mouthfuls any lager will taste like fizzy water.

So what should you drink at the barbecue? What is refreshing on a summer’s day but hearty enough to match any meat?  Well, here are three styles that, paired with the right dish, will blow the lid off your barbie.

A brilliant style that, because lager drinkers don’t like dark beers and beer nerds don’t like lager, sadly falls into a gap. But they’re missing out, because dark lagers can be beautiful things – crisp and refreshing, but with the dark fruits and smoothness of a dark ale. The roasted malts add depth and sweetness that match red meats and deal with the burnt edges (or, indeed, cremated sausages). Freedom Dark Lager and Budvar Dark are great, but you could also try a sweet bock like Huber’s or a Vienna lager like Brooklyn – possibly the perfect amber summer beer.

Red ales are one of the beers that have evolved the most through the craft beer revolution. Originally a slightly sweeter version of the classic bitter, reds were made with a small amount caramalts, which have a distinctive caramel flavour. But they changed forever when the Americans got hold of them. As with most Americanisms, they went big: big on hops, big on caramalt and big on alcohol. The result was lots of bittersweet, caramel-tinged red ales with hoppy finishes that could cut through anything. Meantime’s Yakima red is great with pork – try it with a caramelised onion sausage – and Bear Racer Red Rocket is incredible with a burger or, better still, a rack of ribs. That’s exactly what we served them with – once we’d brined the ribs in beer and smoked them, of course. 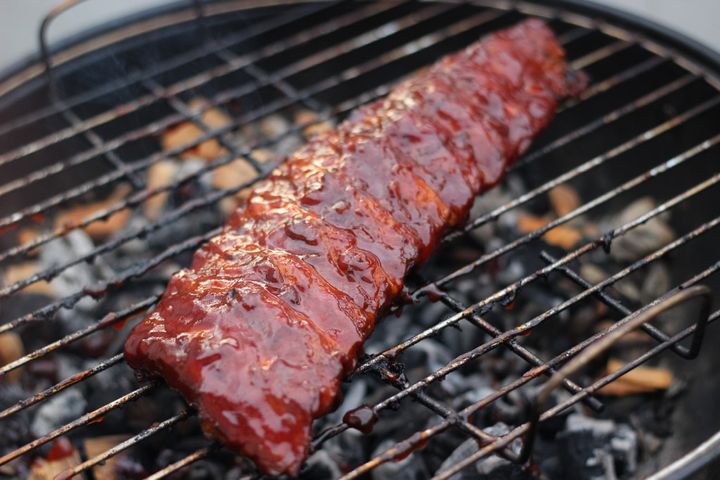 You’d be hard pushed to call this a summery style, but there is something sunny about the double IPA. Essentially it is a hoppy-as-hell India pale ale with roughly twice the amount of malt, which means around twice the amount of alcohol. At around 8-9% ABV you can’t exactly glug one to relieve the heat of the day, but the super-fresh hop notes can give what is otherwise a very sticky beer a fresh finish.

But it’s the stickiness that is key here. They often have a gorgeous sweet mouthfeel that just mixes in with any sweet or spicy marinades, and the hoppiness gets right through the meat. For example, Brewdog’s Hardcore IPA was amazing with our web editor Jim’s smoked-beer chicken wings.

For me, the double IPA isn’t just the perfect barbecue beer, it might just be the perfect beer style. It ticks all the flavour boxes – sweet, bitter, herbal, zingy and sometimes even a little bit pithy.

It’s what I’ll be drinking around the barbecue, and if things get a little bit blurry at least I have these grilling tips to fall back on…