It’s outdoor dining month here at Jamieoliver.com. The sun is out, as are the terrible T-shirt suntans, and that means one thing: barbecue season.

Let’s face it – most of us are terrible barbecuers. If we’re not cremating sausages, we’re probably poisoning our friends. It’s strange that we pick the method of cooking that needs possibly the most concentration on days when all we want to do is kick back and have a beer.

Cooking well over fire takes some skill, but mastering those techniques will give you a special seat of honour among your friends. Here are our top ten tips, equipment and techniques. Armed with these you will be Lord of the Tong, Master of the Flame, the guy stood next to a screaming heat source on an already-hot day. Get fired up, it’s grilling time.

Get the right barbecue

It may sound basic but there are two crucial things your burner needs if you want to make great barbecue food. The first thing is, it has to be a charcoal one. There’s nothing wrong with gas barbecues, but you won’t get any extra smoky flavour. You might as well be cooking in the oven, flavour-wise! The second thing you need is a lid. It locks in flavour, keeps the temperature constant and can be used as an extra technique. Without one you can’t do beer can chicken, or melt cheese on burgers, or smoke ribs…

Without putting too fine a point on it, Jamie has some awesome kit that he uses at home right here.

Use the right fuel

In the UK, charcoal is usually bought in a rush from a petrol station car park as soon as the sun peeks its head around a cloud. But being prepared can make a huge difference, because the charcoal you use changes the way your food tastes. Our main man DJ BBQ, author of Food Tube’s BBQ Book, recommends lumpwood charcoal – the stuff that looks like burnt tree – because it will give the best flavour. It’s unadulterated and natural.

If you’re a bit of a pro, try adding wood chips to your charcoal. Hickory and oak are great with fish and pork, while cherry and apple wood add a sweetness to most meats. Just soak half what you’ll use in water to make it last, then add it all once lit.

Wait for the right moment to cook

Barbecuing takes patience and concentration, in that order. You need to wait for the flames to die down – flame-grilled is a very misleading term! You want the coals white hot – by which I mean grey and glowing. That’s the hottest and evenest heat.

Get the temperature bang on

Following on from that, don’t forget that what you have created is a caveman oven, so you need to control the heat just like an oven. DJ BBQ says the best way to test the heat is with your hand. Hold your hand about 12cm/5inches above the grill and see how long you can hold it there comfortably (ie. without screaming).

You also need to control the temperature across the grill. The easiest technique is the half and half – put all the coals to one side, so you have a mega-hot side and one with no direct heat.

Get the best tools

We’ve all accidently lost a sausage down a grill or flipped a burger over the edge. Well, get yourself a decent fish slice, a heavy-duty oven glove and maybe even a fish grill (clamp/clip/basket thing – we’ve no idea what they are called). The one bit of kit you simply must have is a decent pair of tongs – they give you the most control, and reduce the chances of dropping anything between the grills.

Make your own burgers

Homemade burgers are better. Even if you make them from nothing but salt and pepper and good-quality meat, they will beat anything in the shops. Buy mince with plenty of fat, or get your butcher to give you some minced flank or chuck– you’ll get juicy, flavourful burgers whether you like them pink in the middle or cooked right through. This recipe from Gennaro is a cracker.

Fish is great on barbecues

Why do people forget fish? Fish and smoke are such great friends (think smoked salmon!). So get a whole trout or side of salmon, throw some oak chips in and cook like the caveman you always knew you were. If you’re feeling fancy, slice a whole fish open and stuff with lemon, dill and pepper. Or try this barbecued trout in newspaper.

We all know the phrase “leave for a few hours, ideally over night”. Well that applies doubly to barbecues, to make sure the flavours aren’t overridden by the addition of the smoke. In fact, it’s best to save some marinade when you make, and brush your meat or fish with the marinade every 10 minutes as it cooks. That way it will add moisture, trap the smoke flavour and caramelise gently as it goes.

I know barbecues are an excuse for us all to turn into carnivores, but fire does wondrous things to vegetables too, if you get the technique right. What you want is that lovely charring along the bars – it looks amazing, and tastes even better. So slice thin, then grill straight away – no oil, no seasoning. Once cooked you can add the flavour in some quality olive oil and a bit of vinegar, like in these griddled veggies. Don’t believe me, take it from a very soggy Jamie:

Get the sides right

Sides should never be an afterthought! They will make up two-thirds of what you eat if you’re trying to have something that resembles a balanced meal. You could go for a classic potato salad, get some cheeky corn on the cobs on the grill, some simple and delicious couscous or, my favourite, some Navajo flatbreads – awesome made on the barbecue and great for mopping up marinades. 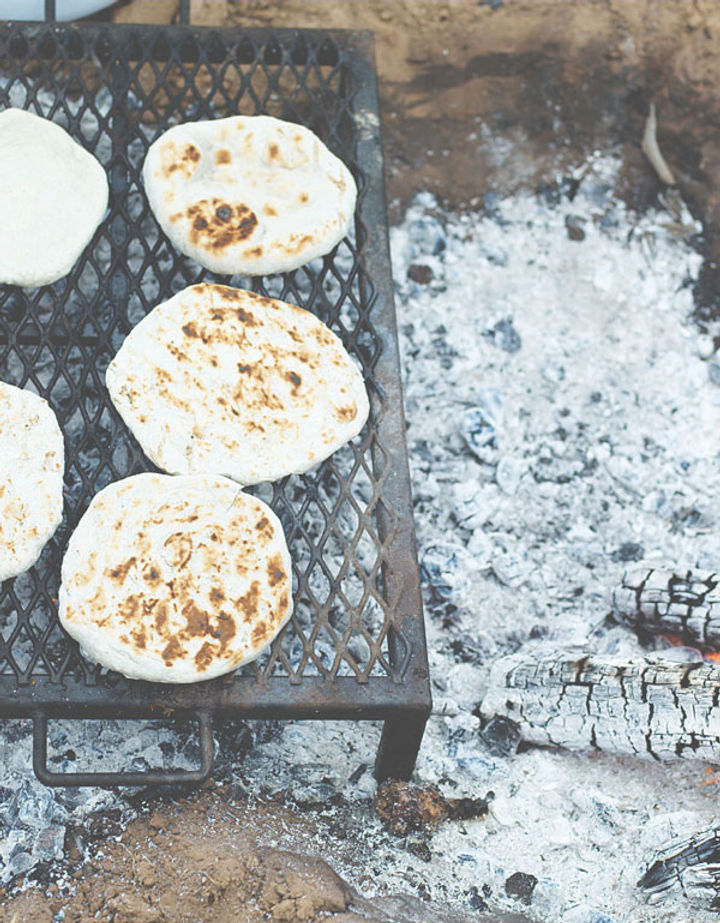 So there you have it, our top ten tips for barbecuing. Have you got any to add, or any recipes you think make a barbecue extra special?