I used to pity vegetarians in winter. Lettuce won’t warm you on a cold, drizzly, dark evening, I would reason to myself.

I had a friend who once said: “The last thing anyone thinks about after a hard day is a salad”. However, the more I think about it now, the more true it gets, because even vegetarians don’t dream of salad. Far from reducing your options to leaves, deciding on a vegetarian meal leads to all kinds of invention and exciting changes. A burger could be a spicy Mexican bean burger or a Portobello and halloumi version; a chicken curry suddenly has sweet, soft butternut squash instead; and pepperoni pizza is nothing compared to Jamie’s potato, mozzarella & rosemary one.

You see, except a big old rib-eye for when things are really bad, my ultimate comfort recipe has no meat in. It may have the word meat in the original title, but I have no interest in it. Let’s not beat around the bush – my veggie chilli is exceptional, and far better than my beef one because of one gorgeous ingredient – sweet potato.

A staple ingredient around the world and an absolutely hero in my kitchen, there isn’t a lot the sweet potato can’t do. It makes brilliant baked chips with mayo, it makes an outrageous mash with goat’s cheese, and sweet potato pie is a joy I don’t get enough in the UK. When you use it in chilli, though, it’s simply magic. It takes on the smoky paprika and spicy chilli, it absorbs the sweet tomato, and adds a fantastic orange colour to contrast the bright red of the sauce.

Before anyone starts trying to tell me that this isn’t a real chilli, I need to point out that, as dishes go, this is pretty much the most personalisable recipe there is.

The concept behind it is so simple, but the places you can take it are endless. Texan chilli has nothing but meat, tomatoes and chillies, US president Lyndon B. Johnson preferred venison meat, and back in the 1880s no recipe was quite the same thanks to the tradition of Mexican “chilli queens”, who cooked chilli on fires for soldiers in Texas.

Jamie adds coffee to his, and many people add dark chocolate or sugar. True, they all use meat, but Jamie’s veggie chilli (the image at the top of this article) is a joy to behold too – partly because of the awesome tortilla salad it comes with and partly because it only takes 15 minutes. Since discovering the veggie chilli I will never go back to meat. There is no point. It won’t have the sweetness, the soft textures, the colours, or the smells.

I will take my own veggie chilli recipe to any chilli cook-off and watch as bellied aficionados choke on their own expectations. This is a clarion call; the start of something new! Meat is out-dated and has been outdone; it is frequently expensive, occasionally poor-quality, and often no more than a texture in a melee of flavours created by lovely, endlessly variable veg. All this is true – except in the case of the nut roast. Nut roasts are rubbish. 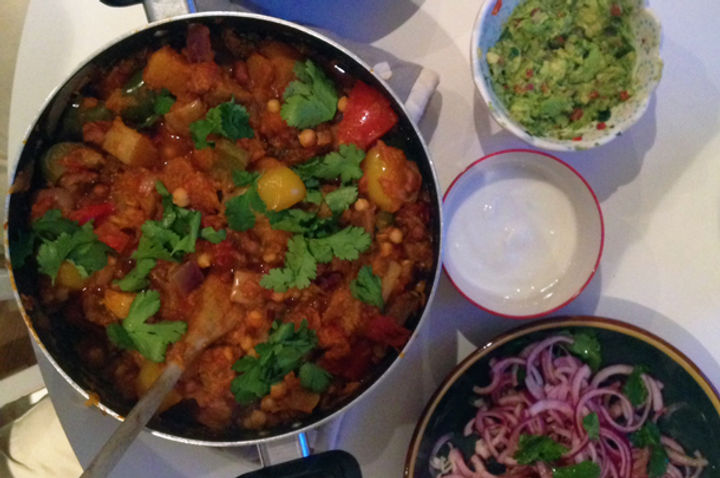