Barga is a medieval town surrounded by the chestnut woods, poplar trees, olive groves and grape vines of the Tuscan hills. It nestles in the Garfagnana Valley, which, despite sounding like someone choking on an olive, is an area famous for wild boar, pork, prosciutto, pecorino cheese, and honey. It is the area’s ingredients that inspired Rose Gray and Ruth Rogers to create the River Café, so it is hallowed ground indeed.

Food is very much central to Barga’s identity and it is the epitome of a classic Tuscan town, and yet on my recent visit there I was struck by the many contradictions to be found in this wonderful part of the world. We had travelled as a family with our good friends Ross and Martha and their children for a two-week retreat. In total we were four adults and seven children, all of whom were sporting various levels of fair hair and pale skin. Among the locals we looked like a sun-starved travelling circus troupe. However, the locals were also not as they seemed. They looked Italian and spoke Italian, but with Scottish accents. In fact, it seemed over half the people there were from Scotland.

Barga is the most Scottish town outside of Scotland. It has gone through good and bad times – it has been prosperous, poor and fought over. In the lean times, particularly at the demise of the town’s silk industry, there was a large migration from Barga – most travelled to Scotland where they worked as street traders. Eventually they inter-married and found fortune running ice cream parlours and fish and chip shops, then returned. With newfound wealth the second and third-generation families built a new area outside the historic walled centre with beautiful villas. This forms a striking dichotomy of architecture whereby one minute you are in wide streets with tall Georgian townhouses and the next winding through shoulder-width, high-walled stone streets. 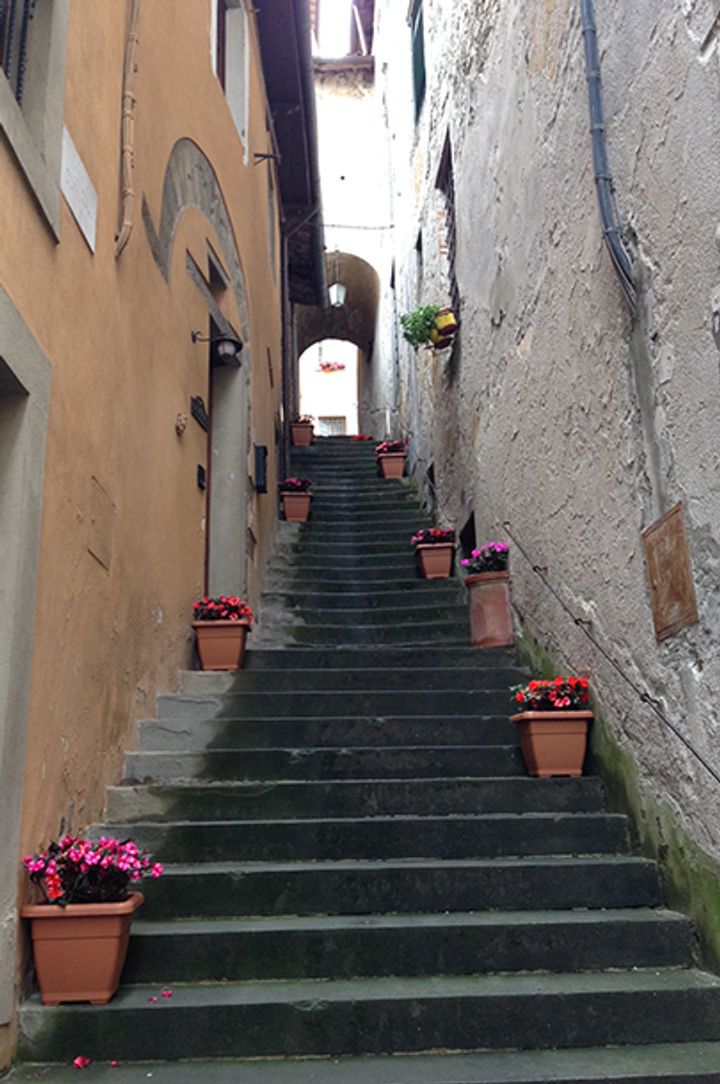 The food really is amazing – there is a weekly market and great restaurants but, best of all, Barga contains one of my favourite shops; an alimentari (or grocers) called Alimentari Caproni that’s run by two brothers, Rico and Agostino. Our friends had been going to Barga for years and decided this year they were going to get married there, after eighteen years together. The brothers greeted them like long-lost friends and proceeded to offer us all wine, bread and ham while gently pinching the cheeks of all the children. The shop was filled with local hams, salamis, breads, olive oil, wines, cheeses and porcini. We did a lot of shopping there and I particularly liked the way that the brothers would remove certain items from our baskets at the till and replace them with their own considered choices. In the UK it would come across as rude and pushy, but in the contradictory town of Barga it was great personal service and showed that the brothers cared enough that we made the right choices.

And yet it wasn’t the usual ingredients that stuck in my memory, even though they were exquisite. It was the ones I wasn’t expecting to eat that really made an impression. Considering that we were already relatively high up in the hills, we took a short trip out one day up a narrow pass to a tiny trattoria next to a closed monastery, carved out of the rock face and centuries old. The order of monks that still presides there lives virtually underground in caves. However, they must at least be tempted to break all of their vows and visit the trattoria because it is wonderful. It hasn’t changed its menu in years and offers just a couple of choices – basically trout or meat. The most astounding meal I had was a plate of trout that had been butterflied open and simply cooked in herbs and butter with some scalloped potato. The idea of trout up in a mountain trattoria still makes me shake my head in surprise and I’ve been there – twice! 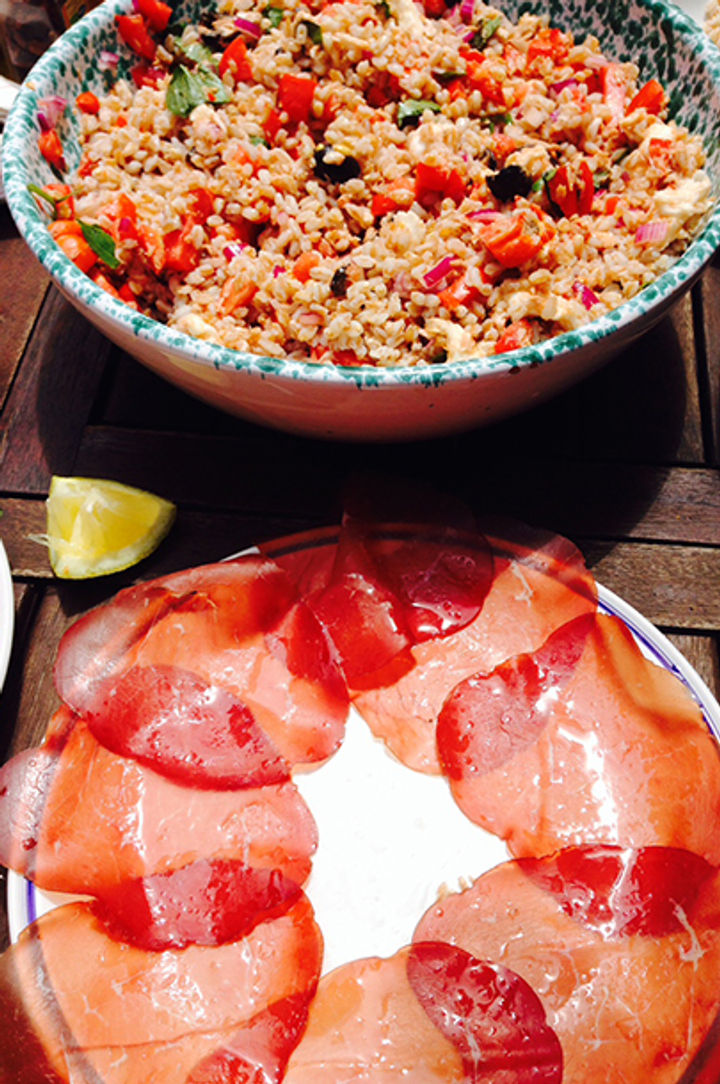 Of course there was plenty of home cooking to be done as well, and Ross and I were more than willing chefs. We managed to pull together some classics and tip the contradiction scale back into pure Tuscan fare with stuffed courgette flowers, steak Florentine, farrow salad, pesto pasta, pizzas, seafood linguine and octopus stew. We spoke about the food a lot even before we had left the UK. In fact, we had pretty much organised our menu for the whole two weeks within a week or so of booking the holiday. The one dish that we wanted to cook was a traditional porchetta, although we were in two minds about using a suckling pig that the most traditional recipes calls for. After several conversations about it we decided to try to order a suckling pig from the local butcher and bone it out ourselves, making sure to ask for the offal so that we could make the stuffing.

Now, our Italian gets better after a couple of vinos, but I would say that Ross and I are at best enthusiastic with our attempts at Italian. We’ve got all the gestures and intonation but lack in vocabulary. Still, we thought that we had made ourselves clear to the butcher when we ordered a “piccolo suino” for porchetta and he said that he could get one in a few days. Sadly, when we went to pick up the pig we found that we had ordered a “small bit of pig”, which was actually a significant cut of loin with belly attached. Happily that’s still good for porchetta, and we did manage to make it using herbs and sausages for the stuffing, rolling and tying it before roasting it for three and a half hours so that it had wonderful crackling skin – but it wasn’t what we were expecting. It took a very Italian old woman with a very strong Scottish accent to translate to the butcher what we had intended. He said next time we are in Barga he will know what we mean – which is, I guess, as good as an invitation to go back.

Even on the last day, as we were heading to the airport, the contradictions were still present – we realised we were going to miss the forthcoming festival “Sagra delle Pesce e Patate”, which is Barga’s week-long celebration of fish and chips. I suppose ultimately it was slightly at odds to be spending time with people who were actually on honeymoon too, but as with all the opposites on that holiday, Ross and Martha were just meant to be together.