The arrival of spring has to be one of the happiest times of year. It’s hard not to feel excited as the thermometer perks up and the flowers burst through – especially when a new plateful of seasonal treats comes with them.

T. S. Eliot may have thought April the cruellest month, but what could be kinder than a warm hot cross bun, slathered in melting butter? You may not be able to buy them one-a-penny or two-a-penny anymore, but there are still few who can resist the spiced scent of toasted buns wafting across a kitchen.

It’s no wonder that they’re one of our best-loved bakes, either, because we’ve been perfecting them for centuries. The Egyptians, Ancient Greeks and Romans all made variations of the bun to celebrate the change in seasons, and Saxons are believed to have marked theirs with a cross to honour Ēostre, the pagan goddess of spring and fertility.

In Christian folklore, the buns, crossed with dough to symbolise the crucifixion and eaten as a triumphant end to Lent’s self-denial, have always been surrounded by superstition. Legend had it that when baked on Good Friday, a bun wouldn’t go stale or mouldy for the whole of the following year (we don’t recommend trying this one out), and they were even hung up in kitchens to prevent fires (ditto). Some believed they were medicinal, some swapped them as a token of friendship, and sailors took them to sea to protect themselves from shipwreck.

At The Widow’s Son pub in Bromley by Bow, London, you’ll even find a net of old buns hanging above the bar today. As explained in Spitalfields Life, the 160-year-old pub was named after the site’s former resident, a widow whose son had gone to sea. Having promised to bake him a hot cross bun for his return, she kept up the hopeful tradition in his memory even after he drowned at sea – and members of the Royal Navy still present a new bun to the pub every Good Friday in tribute. 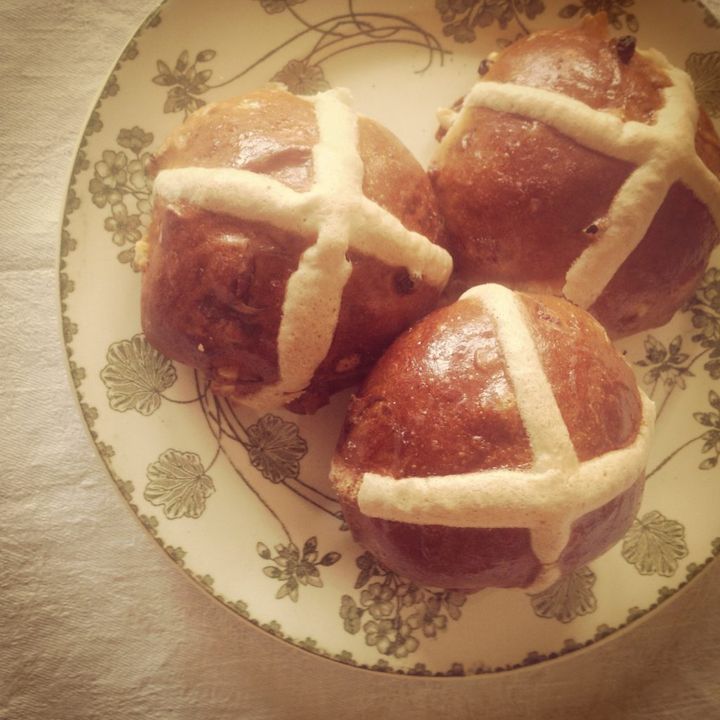 Today hot cross buns are as popular as ever. Though other flavours like apple, cinnamon and even Earl Grey tea have crept into a few mixing bowls, for the most part we’re still tucking into the same glossy, fruit-stuffed variety our ancestors enjoyed.

Whether it’s sacrilegious to fill them with cheese or top them with Nutella is another matter… but we still have a month to decide.

If you want to try making your own this weekend, give Jamie’s gorgeous new hot cross buns recipe a try – you won’t regret it!

The Flour Station grew out of the basement of Jamie Oliver's Fifteen Restaurant. We soon ran out of space and branched out to our own bakery premises. Not long after that, we set up our first stall at Borough Market and since then we've been baking our delicious sourdough breads for top notch cafes, delis and restaurants across London as well as our weekly market stalls.