Try something different this year with an Italian take on Christmas lunch. With so many different dishes eaten across the country, it’s the perfect source of inspiration for some seriously epic festive feasting.

Whilst most of us in the UK don’t stray far from turkey and sprouts at Christmas, in Italy, the menu can vary massively from region to region, and even household to household. The only defining characteristic is that, for most Italians, food is central to the festivities, which are often quite a marathon of eating! So, who better to share their favourite festive menu than everyone’s favourite Italian, Gennaro Contaldo, who’s cooking up a mega Christmas feast in this month’s Jamie magazine.

THE NIGHT BEFORE CHRISTMAS

Although the food eaten at Christmas varies throughout Italy, the Feast of the Seven Fishes is a Christian practice that’s still observed in many homes. Abstaining from meat before the big day is rooted in Roman Catholic tradition, though this certainly doesn’t mean you’ll go hungry. At least seven varieties of fish are usually eaten, with some families enjoying up to 20 different dishes. Expect an array of fishy delights, especially in the fertile oceans of the country’s south coast, from spaghetti with mussels to baked eel with olives, chillies and capers, or marinated anchovies. If you fancy hosting your own seafood feast for Christmas eve, this chargrilled squid with chilli and mint is a dinner party-friendly option as the squid is cooked whole for minimum fuss, and it has real wow-factor when brought to the table like this. 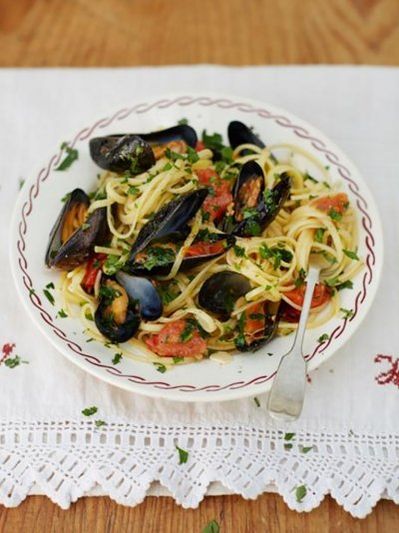 When it comes to the main event, Christmas dinner is a lengthy affair. The meal might start with a beautiful antipasti board. Load yours up with your favourite Italian cheeses, cured meats, olives and sun-dried tomatoes, then let the whole family dig in.

Italians are renowned for their baking, and a beautiful homemade bread is often served at Christmastime. Sfincione is a traditional foccacia bread from Palermo, in Sicily, that was first baked by nuns in the San Vito monastery, and historically served over the festive period. Adorned with anchovies and topped with caciocavallo cheese (a stretched-curd cheese produced throughout southern Italy), it’s packed full of flavour. Put a British spin on this Italian tradition and serve up this gorgeous chestnut-studded focaccia, loaded with crispy pancetta and fragrant rosemary. 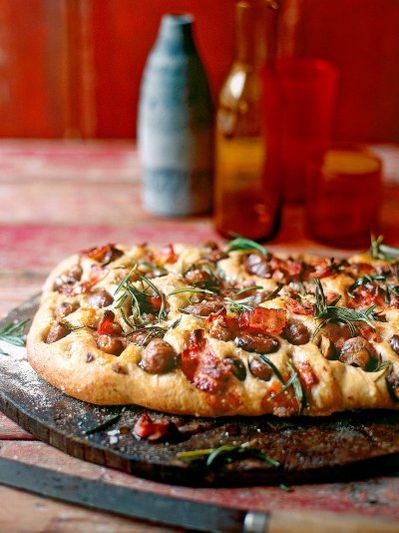 Nothing says Christmas like chestnuts, and this focaccia provides the perfect Italian twist

There are typically several main courses served up for Christmas dinner in Italy. Proceedings might begin with a steaming bowl of broth, sometimes with delicate homemade tortellini. You might then expect to be served Lo Zampone – the skin of a pig’s foot filled with spiced mincemeat – in Northern Italy, Pasticcio al forno (baked pasta) in central or southern regions, or a classic lasagne Bolognese in the north-east. Either way, there’s little chance of going hungry!

This pot roast pork with a sticky fig sauce makes a fitting centrepiece for Christmas. 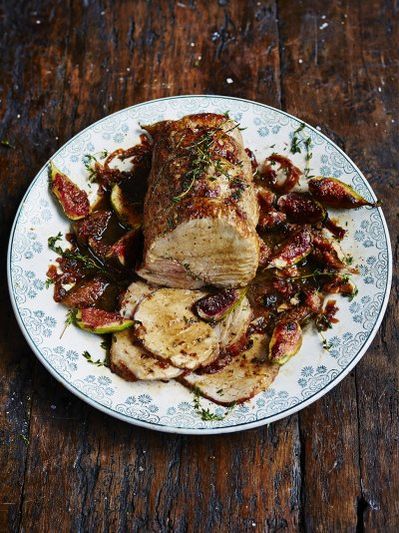 Meat dishes are usually served with lots of trimmings and plenty of gravy. Try giving your veggies an Italian vibe by spiking them with saffron and raisins, as in this Sicilian sprout and cauliflower dish. 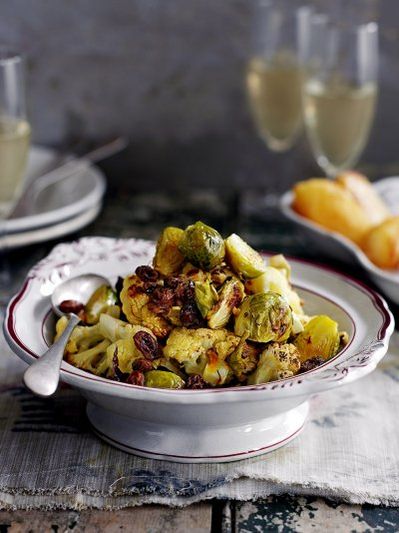 Give your sprouts a Sicillian twist in this delicious recipe with cauliflower, pine nuts and raisins

When it comes to desserts, panettone is served all over Italy at Christmas, which could be why we’ve adopted it with such enthusiasm here in the UK. This traditional cake originated in the early 1900s, when it was first made over the holiday period as a way to use up leftover bread dough and dried fruits. It’s since been adapted by Italian confectionary companies, and these days it’s exported all over the world. Serve this with a strong espresso to finish your meal in style.