“Salina is known for its capers, and as her family have grown them for generations, Nonna Franchina is totally in tune with how to make the most of them in her cooking. This dish is a wonderfully tasty example of that. ”
Serves 4
Cooks In1 hour
DifficultyNot too tricky
Jamie Cooks ItalySeafoodItalianTomatoPasta & risottoLunch & dinner recipes

Please enable functionality cookies to use this feature
Tap For Ingredients

Place half the capers in a bowl with the breadcrumbs, egg, 1 tablespoon of oil and 2 tablespoons of water. Finely grate in the pecorino, peel the garlic, finely chop with the parsley (stalks and all), then scrunch it all together.

Peel and finely slice the onion and place in a casserole pan on a medium heat with 2 tablespoons of oil, stirring occasionally. Now, a great nonna trick: squeeze the tomatoes while submerged in a bowl of water to remove the seeds (and prevent them going everywhere!). Add the tomatoes to the pan with the passata. Simmer on a low heat while you stuff the squid.

Keeping the tentacles to one side, just over half-fill each squid tube with the breadcrumb mixture, pushing it right down into the tube but being mindful not to pack it too tightly. Use a cocktail stick or toothpick to seal or, like Franchina learnt from her grandparents, use a needle and thread. Stir the remaining capers into the sauce, then add the stuffed squid and tentacles. Simmer on a low heat for 25 to 30 minutes, or until tender.

Meanwhile, cook the pasta in a pan of boiling salted water according to the packet instructions. Use tongs to move the squid pieces to a board. Removing the sticks or thread, slice the tubes to reveal the filling, then arrange on a platter, spoon over a little sauce and pick over the basil. Drain the pasta, reserving a mugful of starchy cooking water, then toss with the remaining sauce, loosening with a splash of cooking water, if needed. Serve with a grating of pecorino, alongside that tasty braised squid.
Please enable targetting cookies to show this banner
Related recipes 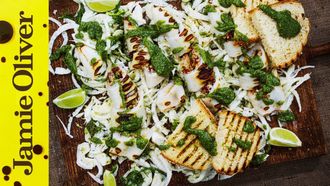